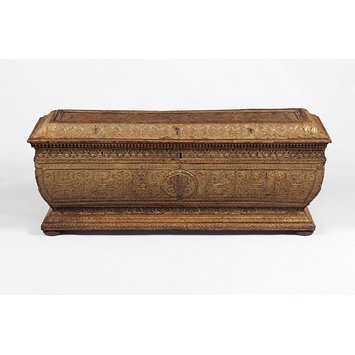 The coat of arms on the front of this chest suggests that it was made for Francesco Maria I, Duke of Urbino (nephew of Pope Julius II and Commander-in-chief of the Papal states) who married in 1509 Leonora, or Eleanor Ippolita Gonzaga, daughter of the Marquess of Mantua and Isabella d’Este, the humanist patron and collector.

Remarkably, the original decorative scheme survives - of water-gilding and blue paint on moulded gesso decoration. Following Venetian practice it may have formed part of the furnishing of a Camera d'oro (Golden bedchamber) with marble fireplace, gilded architectural woodwork and best quality gilded furniture.

Decorative scheme
Lid: deep ogee moulding all round with calyx pair alternating with stylised palmette, and acanthus at each corner, surrounding a flat panel with the remains of a design of scrolling foliage and an interlace (guilloche) band, with central rosette and a half rosette (both with bead border) at either end; below the lip of the lid a dentil moulding with blue recesses.
Front and sides of the body (in cast ornament except where noted, the described from the top down): a frieze of palmette alternating with paired calyx on a blue background (unit width 13.6cm); simplified leaf and tongue moulding (gilded wood); within a wide border of enclosed palmette and trefoil leaf (unit width 10.5cm), with corner flower-heads, and innerand outer beading, is a panel made up of a repeat (unit size 34cm wide by about 20.5cm high). Each repeat has a central candelabrum from which rises an eagle with wings extended, flanked by vertebrate scrolling stems. This design (used singly on each side) is repeated along the front with 3 eagles either side of the central coat of arms (with red, blue, and black painted detail) on a beribboned cartouche within a circular laurel wreath, with a flower-head above and below; simplified leaf and tongue moulding (gilded wood); cavetto with what may be described as double calyx with undulating dolphins (unit width 15.5cm); ogee moulding with simplified leaf and tongue moulding (gilded wood, with punching); convex moulding with scale (gilded wood).

Construction
The cassone is essentially nailed together, with a series of nailed mouldings to create the plinth and lid, and small additional mouldings on the front and sides of the cassone above and below the frieze. The front, back (12-15mm thick), sides and bottom are all apparently single planks (possibly poplar) nailed together at lapped joints. The curved front and sides have each been cut from a deep plank (about 9-10cm thick). The front and back are nailed to the sides. The front is apparently held with 3 nails each side while the back is held with 8 cut nails at each side (with different shaped heads but all apparently original) and 9 nails into the bottom. At the left side one wooden peg has also been used to hold the back to the side. It seems likely that as few nails as possible were used to hold the front so as to reduce the risk of disturbance to the gilding.

The sides and front of the plinth are built up in 4 sections of roughly finished wood, nailed together and then fixed to the bottom with nails from inside. Under the plinth circular feet, the rear feet a half round. Under the bottom is a central batten running front to back, nailed from inside and up from below.

The lid is apparently constructed of a single wide plank (without noticeable warp, but sagging along its length) on which are built up four mitred ogee mouldings to form a frame. A lid to this frame is formed from two mouldings which hold a flat panel (decorated with carved and gilded gesso and blue paint, now heavily worn), apparently over a hollow cavity.

The lid is attached to the back with two iron strap hinges (fixed with cut nails), which replace 3 original staple hinges. On the underside of the lid at the sides and front a dentil moulding has been nailed at intervals of 15-25cm; this matches a corresponding plain flange to ensure a snug fit when the lid is closed.

The interior is plain, and painted blue with traces of a white linen lining fabric; where the fabric has been lost it has left its imprint on the painted surface.

Metalwork
At each side a wrought iron handle is held on two rings nailed into the wood, with split ends.

Decorative surface
The original decorative scheme of watergilding and blue paint survives on this cassone. The original effect would have been of a much more uniform, 'solid' gold finish with brighter blue, especially on the flat of the lid, (as opposed to the differences in gilded finish that now appear on the front/sides, and the lid/plinth areas.)

The bulk of the gilded decoration is as follows: wood; gesso duro (containing calcium sulphate) sheets (4-5mm thick) into which a repeat design was pressed at the bench, then attached to the bare wood, probably with a layer of size; a brush layer of gesso sottile (1-2mm thick) which would conceal the joins; reddish bole; gold leaf; blue paint (azurite on indigo) in certain areas, brushed over the gilded surface; burnishing and stippled background achieved by close punching with a small round head.
There is evidence that some glazes were added in certain areas eg eagle heads?
The gilded areas not treated in this way, but with brushed gesso on carved wood are: the flat central panel of the lid to which a layer of gesso was applied (and the design drawn), the background punched, and flat areas painted blue, then cast rosette motifs applied; the dentil moulding on the underside of the lid; the horizontal leaf mouldings (an applied wood moulding) just below the upper, blue frieze, and above the lower, blue/gilded cavetto; the plinth mouldings below the lower cavetto blue/gilded cavetto which are carved wood/gesso with punching; the small 'sight edge' mouldings on the top of the lid, which are carved wood/gesso.

Back: the back is painted with repeat ermine tail motif, arranged in 3 tiers on a black background.

Damage and interventions
A dark varnish has been applied over the lid and much of the plinth, presumably to conceal wear and losses.
Bruising where the handles have been raised.
The lid hinges have been replaced (see above).
The chest was fitted with three lightweight internal locks (originally nailed, now missing) with corresponding hasps driven into the underside of the lid; the two, smaller, lateral hasps (possibly not original?) have been removed, the larger, central one survives.
There are four recent holes near the centre of the bottom, probably used for a wire fitting to secure the lid shut while on display in the Museum.

The back with a long split (glue treatment at surface). There are some flight exit holes. Other than the replaced lid hinges the evidence seems to point to structure and surface in original, though abraded condition.

Gilded and painted gesso with blue paint, on poplar

Bought for £40 from M. Gagliardi, Florence.
J.C.Robinson, in his Art Referee report no. 16199 dated July 16, 1867 (V&A registry, ref. MA/3/23) notes that 'Mr Gagliardi of Florence is here [London] on his usual annual visit, and has brought over a miscellaneous collection of works of Italian art for sale. As on previous occasions, Mr Gagliardi sent to me to make the first inspection and choice on behalf of the Museum...
2. A Florentine cassone or long chest, richly decorated in low relief work with ornaments in stucco, gilded. circa 1480. price £40
...All [four objects inspected] are beautiful and important specimens of the kind and reasonable in price.
...The cassone is of a different type from any which the Museum posessess, and is in the finest possible taste; the method of decoration also is remarkable.'

The coat of arms on the front was identified by Michael Holmes (V&A NAL) c1984 as showing the arms of Gonzaga (sinister), with the arms of Della Rovere in the second and third quarters, and (very faintly) an impalement for Papal Gonfaloniere, but with unusual marshalling and no crowned eagle as would be expected. From this it was suggested that the arms were those of Francesco Maria I, Duke of Urbino and his wife, Leonora, or Eleanor Ippolita Gonzaga, whom he married in 1509.

Research is ongoing as to whether the eagle motif refers to the coat of arms.

The round form of the feet is also seen, on a much smaller scale, on pastiglia boxes.

Thornton calls this a 'goffano' or 'cassone'. Carrying handles on this seemingly static piece may warrant the name of a grand coffer or goffano.

The cassone bears the arms of Francesco Maria I, Duke of Urbino (1490-1530), and his wife Eleanora Ippolita Gonzaga (1494-1570), who married in 1509. Gilt gesso work of this quality was a Venetian speciality. This cassone is in remarkably good condition and retains its orignal iron handles. [Pre-2006]
Chest (cassone)
About 1509

With the arms of Francesco Maria I, Duke of Urbino and Eleanora Ippolita Gonzaga

Although 500 years old, this chest still has its original decoration on the front and sides. Gesso, of a doughy consistency, was pressed into moulds to form pliable sheets about 5mm thick. These were glued to the bare wood and brushed with liquid gesso, covering the joins. The surface was then water gilded. Blue paint, originally brighter, enhanced the overall richness.
[01/12/2012] 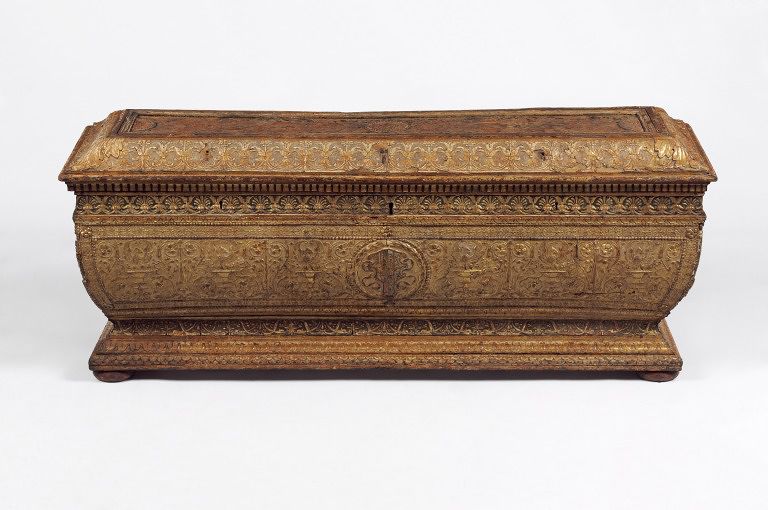