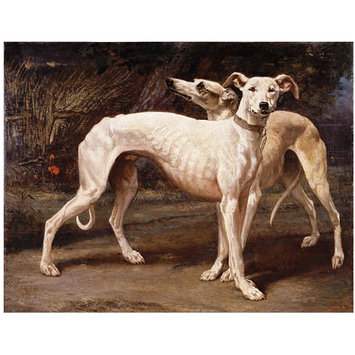 This painting is a fine example of animal painting fashionable during Napoleon III's Second Empire in France. While greyhounds appear to be the very hunting dogs, this work reflects the habits of the Emperor, who revived the glorious hunting past of the French sovereigns, but also the new interest for animals subjects and observation of nature successively reactivated by Romanticism and Realism.

Two greyhounds standing is the courtyard with straw on the left and distant trees on the right background.

Historical significance: This painting is a good example of Jadin's animal paintings. He specialised in hunting scenes and dog portraits under Napoleon III's reign, for whom he painted a large number of animal subjects (currently housed in the Louvre, Paris). The Emperor was particularly keen on hunting, which had been the royal activity par excellence. During the Second Empire, Napoleon III even recreated the office of grand veneur and posts for officers of the hunt. These hunts usually took place in the forest of Compiègne, near Fontainebleau. Two hunting scenes by Jadin are still in situ in the castle of Chambord.
In addition to represent the most beautiful hunting dogs, greyhounds were also usually associated with the aristocracy. In 17th-century Dutch portraiture for instance, they were often portrayed next to the sitter in order to enhance their status.
Although Jadin's subject matter was most likely influenced by Napoleon III's love for hunting. French artists regained interest for animal painting during the 19th century while the society saw the gradual development of industrialisation. On one hand Romantic artists such as Théodore Géricault and Eugène Delacroix were among European artists who gave new vigour to hunting and racing themes; on the other, Realist painters such as Rosa Bonheur produced scenes that often recall Dutch and Flemish masters of the 17th century.

Jadin, who exhibited at the Paris Salon from 1831, specialised in hunting scenes and was famed for his portraits of dogs. Napoleon III dubbed him Peintre de la venerie imperiale. [1987-2006] 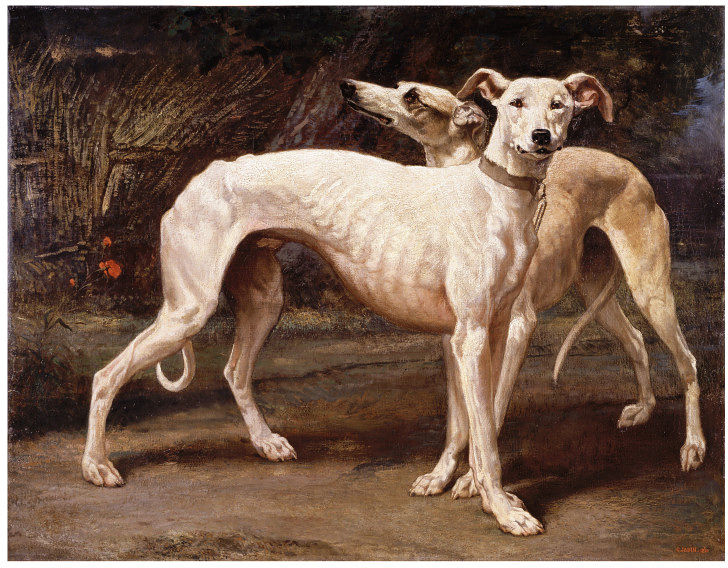