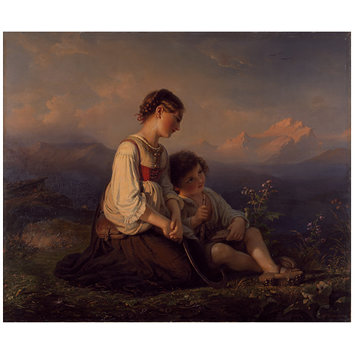 The Vesper Bell: The Young Reapers

This painting is a fine example of Dürck's childhood scenes. It depicts two young children in Helvetic dress with the mountains Alps in the distance. This calm and peaceful scene combines a revived interest of nature, characteristic of the 19th-centry art and the taste for anecdotic genre paintings. This kind of pictures is typical of the Biedermeier movement that develop in the 19th century in Germanic Europe.

A young girl, her hair plaited around her head, kneels next to an even younger boy who sits cross-legged on the ground. The girl holds a scythe in her over-lapping hands, the boy a wooden flute in his right hand and a hunk of bread in his left. They are surrounded by grass and wild flowers. Mountains in the distance.

Historical significance: This painting is a fine example of Dürck's genre scenes. It depicts two young children in a majestic landscape dominated by the Alps in the background. This kind of imagery draws upon the Romantic vision of a spiritualised nature developed in Germany in the 1820s and 1830s. However unlike Romanticism which placed nature as a mirror of the mind, little attempt was made at deeper psychological exploration. The subject matter in indeed dominated here by the peaceful and charming character of the scene.
These pictures attracted patrons and collectors of the 19th-century along with Realist works. This painting was bequeathed by the Rev. Townshend whose collection is a fine example of collectors' taste of the preceding century. The museum owns the most important group of Biedermeier pictures in the U.K.

Frederick Dürck was a celebrated portrait painter based in Muchich, who also worked at the courts of Sweden and Austria. In his later career he produced many idealised scenes of everyday life, usually depicting children. In this Alpine scene the bell for Vespers, the evening service, has just rung, marking the end of the working day.

Dürck, a pupil of Schnorr von Carolsfeld, was based in Munich, although working as a portrait painter for the courts of Sweden (1849) and Austria (1854). He later specialised in genre scenes of childhood. [1987-2006] 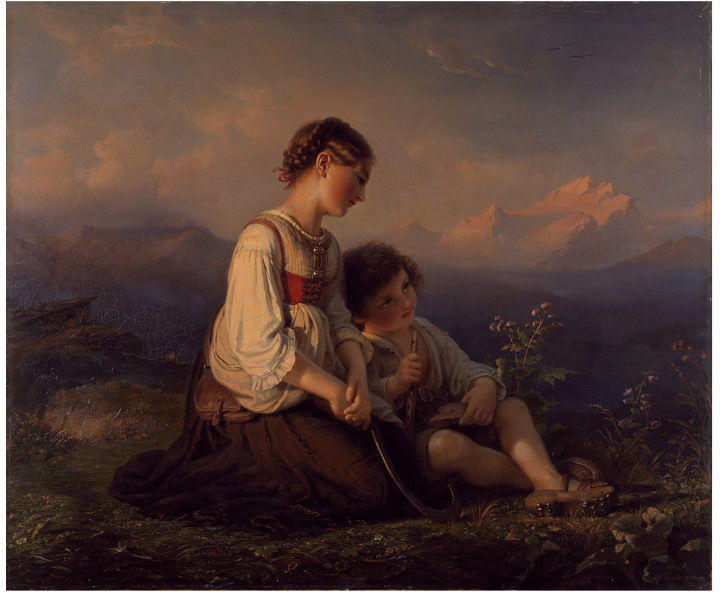