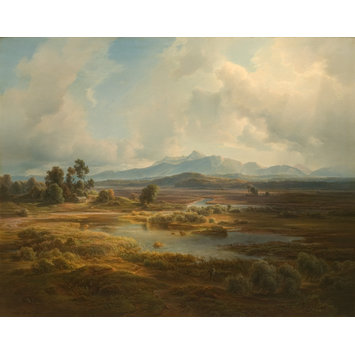 Christian Morgenstern (1805-1867) was born in Hamburg where he trained with Siegfried Bendixen (1786-1864), he later studied at the Kunstakademie in Copenhagen before settling permanently in Munich in 1829. He soon became one of the leading landscape painters of the Munich School.

This painting is a fine example of Morgenstern's art when he started producing larger panoramas while eliminating the immediate foreground. The present painting shows an alpine lake in a wide landscape in brilliant atmospheric colours characteristic of Morgenstern's style. This type of picture was particularly popular with collectors and is a good example of the late Romantic imagery.

Alpine landscape with a lake on a plain scattred with bushes and a few trees on the left; distant mountains vanishing in the mist in the background.

Historical significance: This painting is typical of the landscapes in Munich in the mid century. It is a fine example of the late Romantic imagery which favoured large landscape in striking atmospheric conditions and characterised by a high degree of finish.
Morgenstern was particularly attentive at the direct observation of nature and executed many plein-air sketches in watercolours, which constituted a preparation for his paintings executed in his studio.
Like the early Romanticism of Caspar David Friedrich, Morgenstern emphasised the loneliness and spiritual transcendence of landscape in such similar compositions as Landscape in the Oberbayern, dated 1854, Kunsthalle, Hamburg, and Landscape at Lake Starnberg, dated c. 1830–40, Lenbachhaus Museum, Munich.
This painting was probably bought by the Rev. Townshend before 1854-56, when it was seen in his dining room by Waagen, directly from the artist. It was displayed in London house where it completed there a large collection of 19th-century landscapes paintings. 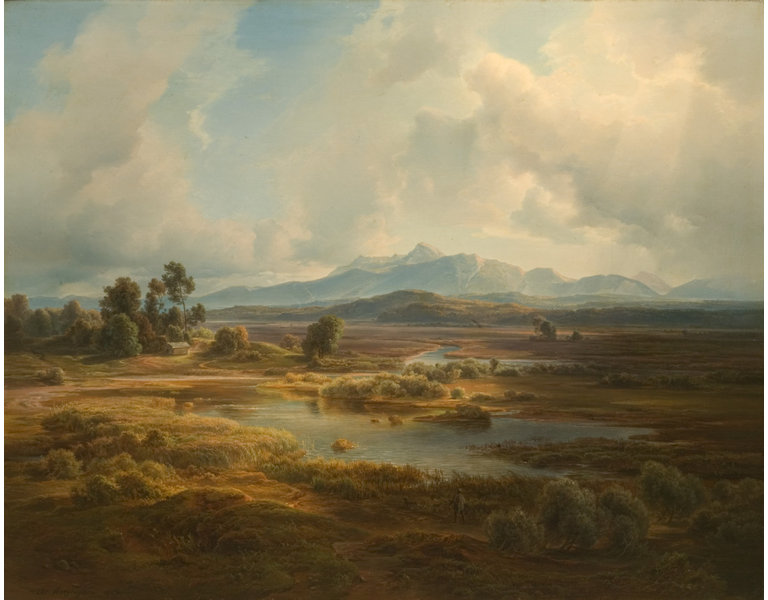