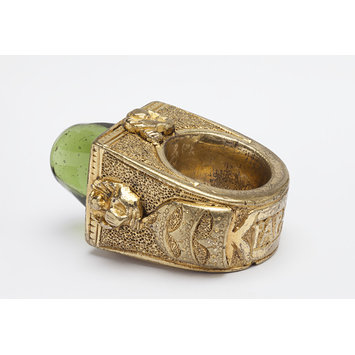 Very large gilt bronze or copper rings set with glass or crystal bezels are often known as Papal rings. They are decorated with the arms of Popes or Cardinals from the 15th century along with papal keys and tiaras and are usually distinguished by their great size and low intrinsic value. Their exact function is unknown but it has been suggested that they were worn as credentials by mounted couriers between Popes and other church figures and sovereigns. They served to prove the identity of the messenger but were not of a value which would tempt thieves. It has also been suggested that they could have been made as pilgrims souvenirs or as gifts for visitors to the Papal court.

This ring is decorated with the symbols of the four Evangelists, Matthew, Mark, Luke and John. The name 'Papa Pio' can be seen on the back of the hoop, referring to Pope Pius II (1458-64) who was born Enea Silvio Bartolomeo Piccolomini. There is a papal tiara on one shoulder of the ring whilst the other has the arms of the Piccolomini family under a pair of crossed keys. A ring bearing the same design in the British Museum collection is engraved 'Thomas Windus FSA Stamford Hill, 1819'.

These rings were very popular with nineteenth century antiquarians and it is likely that out of the 100 plus surviving examples, some were made later to satisfy the demands of collectors. This ring forms part of a collection of 760 rings and engraved gems from the collection of Edmund Waterton (1830-87). Waterton was one of the foremost ring collectors of the nineteenth century and was the author of several articles on rings, a book on English devotion to the Virgin Mary and an unfinished catalogue of his collection (the manuscript is now the National Art Library). Waterton was noted for his extravagance and financial troubles caused him to place his collection in pawn with the London jeweller Robert Phillips. When he was unable to repay the loan, Phillips offered to sell the collection to the Museum and it was acquired in 1871. A small group of rings which Waterton had held back were acquired in 1899.

Gilt bronze Papal ring, the rectangular bezel set with a green paste. The shoulders engraved with the crossed keys above the arms of Pope Pius II (1458-64) with PAPA PIO and the tiara and the symbols of the Four Evangelists are around the bezel

Gilt and engraved bronze set with a green paste

Ex Waterton Collection. There is a ring with the same arms in the British Museum collection. A 19th century papal ring with the arms of the Piccolomini family was sold at the Jurgen Abeler sale, Christies South Kensington 9 October 2012, lot 332, sold for £2125. Christies, King St, sold one for £2990 on 5 October 1994.
The 'Dactyliotheca Watertoniana' of Edmund Waterton has a short section on papal rings:
"Large rings with Papal devices: There exists a class of large and massive rings of brass and of copper-filt, which bear the Papal Insignia, but which from their sizes could never have been intended for wear; neither could they ever have been used for any liturgical purpose. The use of these rings is an enigma which yet remains to be solved. The earliest one of which I know bears (as I am told) the name and arms of Gregory IX - 1370-1378; the latest, those of Julius II, 1502-1513. "

These types of rings are distinguished by their massive size and low intrinsic worth. It is believed they were used as credentials by mounted couriers. The size of the rings made it possible for them to be worn over riding gloves and the low value helped preserve their wearers from attacks by robbers on the road

Gilt bronze Papal ring, the rectangular bezel set with a green paste. The shoulders engraved with the crossed keys above the arms of Pope Pius II (1458-64) with PAPA PIO and the tiara and the symbols of the Four Evangelists are around the bezel, Italy, mid 15th century 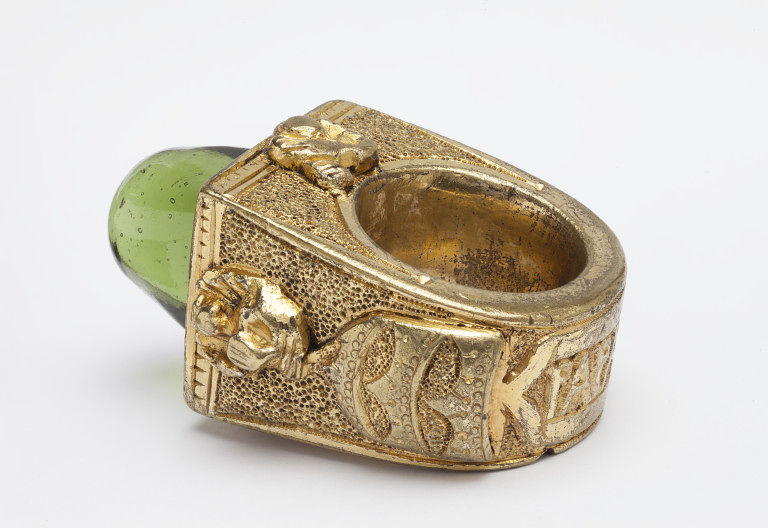