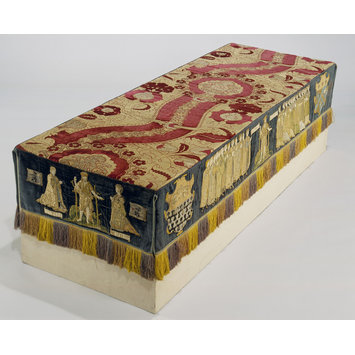 Red velvet funeral pall. The horizontal plane is made of cut and uncut velvet with gold ground; the sides are embroidered with applique figures.

The central panel of cloth of gold, with woven pattern of a wavy stem with conventional flowers and leaves, in red velvet pile of two heights, with gold loops. The four side-panels are of violet velvet, embroidered. In the centre of each of the four panels is the figure of St. John the Baptist preaching. On the two short side-panels his auditors are two kneeling figures, identified by inscribed scrolls as iohn ffayrey and mary ffayrey; two bales bear a merchant's mark and initials 'I.F.' On the two long side panels the audience consists of two groups, one of fourteen men and the other of fourteen women, all standing; the foremost figures of each group are identified by inscribed scrolls as henry ffayrey and agnes ffayrey. The four shields bear the arms of the Merchants of the Staple (with lion), Fayrey (with eagles), the Mercers' Company (with bust), and Butler (with crosses). Fringes of red, yellow and violet silk.

Henry Fayrey died in 1516; his funerary brasses, formerly in Dunstable church, are in the V&A Metalwork collection (museum numbers M.126-1922, M.127-1922, M.2667-1931, M.33-1932). It is presumed that he, or a member of his family, gave this pall to the Fraternity of St. John the Baptist, a religious and charitable group which was founded at Dunstable in 1442 and dissolved in 1547. The unidentified figures on the pall probably represent members of the fraternity. The register of the fraternity is at Luton Museum.

This object was borrowed by the V&A for the 1963 exhibition of Opus Anglicanum, English medieval embroidery.

FUNERAL PALL OF THE FAYREY FAMILY

At the head and foot: St. John the Baptist between John Fayrey and his wife Mary, with inscriptions of their names and merchant's marks. At the side: St. John the Baptist between Henry Fayrey and his wife Agnes, with inscriptions of their names, twenty seven members of the Fayrey family and four shields with heraldry as follows: the Merchant of the Staple, the Company of Mercers, the Fayrey arms, and the Butler arms.

The pall is said to have been given to the Fraternity of St. John the Baptist at Dunstable by Henry Fayrey who died in 1516. []

pall made up in England, but the materials (including the velvet) were probably imported from Italy 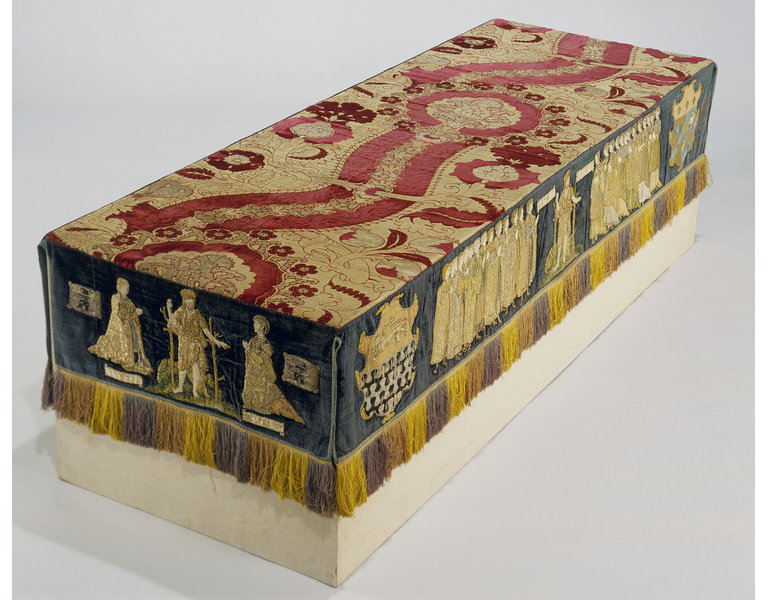