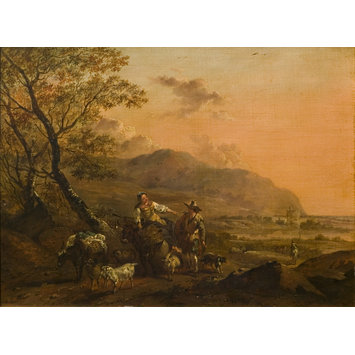 Nicolaes Berchem (1620-1683) may have trained in Haarlem with Jan van Goyen. He was a prolific painter (about 850 paintings), draughtsman and etcher. He joined the Haarlem Guild of St Luke in 1642. From the mid-1650s until his death, Berchem shuttled back and forth between Haarlem and Amsterdam where he died in 1683.

This painting is probably an imitation inspired by the work of Nicolaes Berchem. A print after Nicloaes Berchem engraved by Johannes Visscher (Hollstein, XLI, 94) shows a close albeit inverted composition with similar figures shown from the back. There are no trees in the print but the same architectural element can be found in the background. The print however presents a wider setting than the painting which shows a closer point of view of the same landscape. Berchem had many followers and greatly influenced the art of his time. His son, Nicolaes (van) Berchem, used to imitate his father's style at the end of the century.

Oil on canvas; landscape at sunrise showing two figures on a path, walking towards the viewer. One is a lady on a cow laden with baskets and beside her, chatting, is a man with a dog at his heels. A donkey laden with baskets, sheep and goats also walk with the couple. In the background a man on horseback is driving cattle and there are buildings by a lake or sea.

Bequeathed by John M. Parsons, 1870.
John Meeson Parsons (1798-1870), art collector, was born in Newport, Shropshire. He later settled in London, and became a member of the stock exchange. His interest in railways led to his election as an associate of the Institution of Civil Engineers in 1839, and he was director or chairman of two railway companies between 1843 and 1848. Much of his time however was spent collecting pictures and works of art. In his will he offered his collection of mostly German and Dutch schools to the National Gallery (which selected only three works) and to the Department of Science and Art at South Kensington, later the Victoria and Albert Museum. The South Kensington Museum acquired ninety-two oil paintings and forty-seven watercolours. A number of engravings were also left to the British Museum.

Historical significance: This painting is a good example of Nicolaes Berchem's landscapes at sunset such as Italian landscape at sunset dated 1670-72 in the Alte Pinakothek, Munich, in which he developed a warm golden and pinkish palette. The artist is best known for his imaginary Italianate landscapes. He belongs to the second generation of Dutch Italianate landscapist and had a prolific output with a great diversity of themes. It is not certain whether he actually went to Italy or stayed in the Netherlands and he may have known Italy through the drawings of artists that actually travelled there. It is a good example of how Dutch Italianate painters challenged the traditional division between figural and landscape painting and merged both categories of genre and landscape paintings. Berchem had numerous pupils, including Karel Dujardin, Willem Romeyn, Hendrick Mommers and Dirck Maes as well as the genre painters Pieter de Hooch and Jacob Ochtervelt. The French Rococo painter, François Boucher, owned some of his pictures in the mid-18th century and he also inspired such prominent artists as Francesco Zuccarelli, Marco Ricci and maybe even Antoine Watteau.

Italianates landscapes were particularly praised during the 17th century up to the early 19th century. The term conventionally refers to the school of Dutch painters and draughtsmen who were active in Rome for more than a hundred years, starting from the early 17th century. These artists produced mainly pastoral subjects bathed in warm southern light, set in an Italian, or specifically Roman, landscape. The term is also often applied, but wrongly, to artists who never left the northern Netherlands but who worked primarily in an Italianate style. Eighteenth-century collectors, especially French ones, preferred a view by Berchem or Both to a scene of the Dutch country side by Jacob van Ruisdael for instance. The taste for the Italianates continued undiminished into the 19th century. An early voice denouncing these artists was that of John Constable in 1836 and at the end of the century Italianates had lost favour oartly because of the rise of Impressionism and the appreciation of the Dutch national school of landscape expounded by such eminent critics as Wilhem von Bode, E.W. Moes and Cornelis Hofstede de Groot.

Kauffmann, C.M. Catalogue of Foreign Paintings, I. Before 1800. London: Victoria and Albert Museum, 1973, p. 30, cat. no. 30
A catalogue of the National Gallery of British Art at South Kensington with a supplement containing works by modern foreign artists and Old Masters, 1893, p. 175. 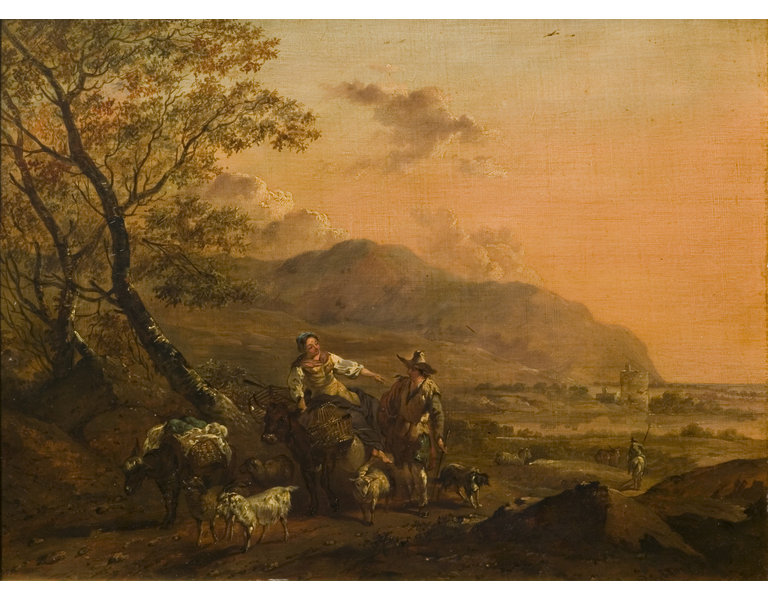