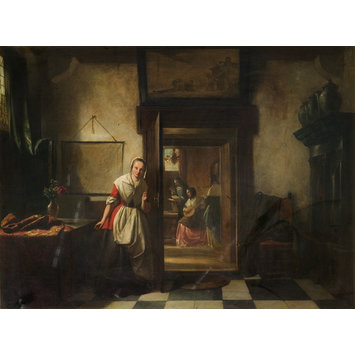 Hubertus van Hove (1814-1865) was born in The Hague and was the son of the painter Bartholomeus Johannes van Hove (1790-1880) under whom he studied. He also trained with Hendrik van de Sande Bakhuyzen (1795-1860). He specialised at first in landscape painting but then turned increasingly to domestic interior scenes. In 1854 he moved to Antwerp where he worked with Hendrik Leys (1815-1869) and resided until his death.

This painting is a good example of the 19th-century revival of Dutch seventeenth-century genre painting, especially domestic interior scenes in the style of Pieter de Hooch, the master of this category in Leyden during the 17th century. 19th-century artists such as van Hove were however less attentive at the rendering of materials and textures and the whole painting is executed in a loose brushwork. The effect of light is preserved but in a golden hue that differs greatly from the white and cool lighting of genuine 17th-century Dutch genre scenes. The creased tablecloth on the table and the hat and cloak thrown on the chair shows how the maid has been distracted from her duty by the music.

A Dutch domestic interior showing a maid eavesdropping behind an open door through which is shown three people having a music lesson.

'Chauncy Hare Townshend (1798-1868) was born into a wealthy family, only son of Henry Hare Townsend of Busbridge Hall, Godalming, Surrey. Educated at Eton and Trinity Hall, Cambridge (BA 1821). Succeeded to the family estates 1827, when he added 'h' to the Townsend name. He had taken holy orders, but while he always referred to himself as 'Rev.' on the title pages of his books, he never practised his vocation... . Very much a dilettante in the eighteenth-century sense, he moved in the highest social and literary circles; a great friend of Charles Dickens (he was the dedicatee of Great Expectations) with whom he shared a fascination of mesmerism... Bulwer Lytton described his life's 'Beau-deal of happiness' as 'elegant rest, travel, lots of money - and he is always ill and melancholy'. Of the many watercolours and British and continental oil paintings he bequeathed to the V&A, the majority are landscapes. He is the first identifiable British collector of early photographs apart from the Prince Consort, particularly landscape photography, and also collected gems and geological specimens.'
The Townshend Bequest was made in 1868, according to the Will of Chauncey Hare Townshend. As can be ascertained from the registered files, the bequest entered the museum in that year. In his introduction to A Descriptive Catalogue of the Historical Collection of Water-colour Paintings in the South Kensington Museum (London: Chapman na d Hall, 1876) Samuel Redgrave also gives the date of the bequest as 1868 as does Kauffman in; Kauffmann, C.M.Catalogue of Foreign Paintings, II. 1800-1900 (Victoria and Albert Museum, London: 1973). However in more recent publications the date has been given as 1869, which is the year in which the objects were catalogued.

Historical significance: During the second half of the nineteenth century the enduring popularity especially of Dutch, Flemish and Spanish seventeenth century genre paintings fostered a taste throughout Europe both for realist paintings of everyday life and for more idealised historicising 'costume pieces' representing domestic subjects set in the seventeenth or eighteenth centuries.

This painting is a good example of the 19th-century revival of Dutch seventeenth-century genre painting, especially domestic interior scenes in the style of Pieter de Hooch (1629-1684), the leading figure of the so-called Delft school, who specialized in architectural paintings and genre scenes. Especially reminiscent of de Hooch's essential characteristics are the palette of reddish-brown tonality and the compositional idea relying upon a black and white draughtboard floor and an open door through which can be seen a group of three people having a music lesson. The floor and the open door convey a deep sense of perspective, a typical feature of de Hooch's output. The eavesdropping subject matter was moreover frequently illustrated by Nicolas Maes' (1634-1693), for example, Interior with a sleeping maid and her mistress (The Idle Servant), The National Gallery, London; The Listening Housewife, Wallace Collection, London; Lovers with a woman listening, Apsley House, London and The Eavesdropper, Rijksbeeldende Kunst, The Hague.

Whereas these images carried a moralising meaning during the 17th century, 19th-century genre paintings lack of such hidden meaning: here the servant is simply listening at a music lesson. The results may be that she is neglecting her duty as the room where she stands is obviously badly managed but there is no comparable denunciation of moral misbehaviour as in 17th-century Dutch pictures. Moreover the pointed finger that used to indicate in 17th-century Dutch picture from where was coming the distraction is now a fixed gesture lacking of precise meaning.

Genre painting involving low class society, especially peasants but also as the decades progressed and the demand for such pictures evolved more elevated class exponents, was popular throughout the 17th century in the Netherlands. These pictures usually depict scenes of everyday life in domestic interiors or the countryside. Scholars are still debating whether they bear a metaphorical meaning and hidden messages, or just feature a close depiction of contemporary events. In both case they are associated with health, pleasure and liberty. Dutch genre painting is also closely related to popular literature and culture, of which proverbs form a very important element. Amsterdam occupies a central place in the history of Dutch genre painting as the city attracted provincial painters from all over the country. However the demand for these pictures was intense and the category developed in almost every well known town (Leiden, Delft, Haarlem, Utrecht and The Hague). The chief leading figures of genre painting in Holland were Jan Steen (1626-1679), Frans van Mieris (1635-1681) and Gerard Ter Borch (1617-1681). Derivative artists like Richard Brakenburgh (1650-1702), Willem van Mieris (1662-1747) and Matthys Naiveu (1647-1726) survived to continue the tradition of genre painting into the eighteenth century however in the second half of the century, there was a discernible shift in the art. The accent moved to the human aspect of the picture and painters were no longer interested in the hidden meaning these pictures could enclose. The motifs of Adriaen van Ostade or David Teniers the Younger reappeared then in civilised form and the great masters of the preceding century (from Veermer, Gabriel Metsu and Gerard Ter Borch) inspired such artists as Adriaan de Lelie (1755-1820) and Wybrand Hendricks (1744-1831) who however could not produce anything else than a sincere expression of their own time. 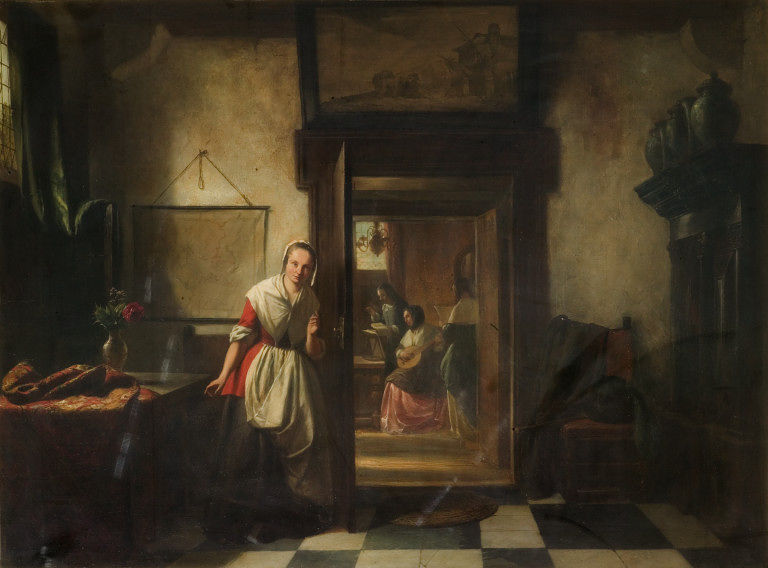