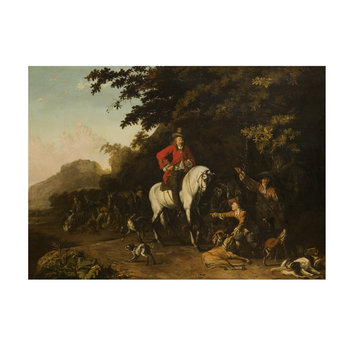 Abraham Hondius (1625/30-1691) was born in Rotterdam and was trained there by Pieter de Bloot (1601-1658) and Cornelis Saftleven (1607-1681). He lived in Rotterdam until 1659 and moved then to Amsterdam. He moved to London in 1666, where he spent the rest of his life. Hondius combined throughout his career several stylistic influences and struggled to develop a style of his own. He however specialised somehow in animal pieces: more than two third of his paintings, etchings and drawings are hunting scenes, animals fighting and animal studies. He also executed landscapes, genre and religious scenes.

This painting, which has long been accepted as a work by Abraham Hondius, shows many similarities in style and composition with Hondius’ hunting scenes of ca. 1650. The majority of these paintings are now in private collections. During those years, Hondius chose to depict quiet moments before or after the hunt, almost invariably set on the edges of a wood. A mountain in distance enhances the depth and provides the whole composition with bigger sense of space. If the figures are quite stiff and wooden, the vegetation is accurately depicted, especially the foliage of the trees and the big leaves in the immediate left foreground , which is used here as a repoussoir so as to structure better the perspective in the whole composition.

On the edge of a wood, a hunting scene with a gentleman wearing a red jacket astride on his horse and two boys with numerous dogs before him; a group of men, horses and dogs are in the mid distance.

Bequeathed by C. D. Rotch, 1962
Mr. C. D. Rotch, of Wimbledon, London, was a collector with a particular interest in furniture. Like other furniture collectors of the early 20th century he was influenced by the furniture connoisseur and dealer R.W. Symonds. Following the prevailing taste of the time, his collection focused on early to mid-Georgian carved mahogany examples and was later bequeathed to the Victoria and Albert Museum on his death in 1962 (see R.W. Symonds, 'Mr. C.D. Rotch's Collection of Furniture', Country Life, 7 June 1924, pp.937-39). At the time, his bequest was described by the authorities as "The most remarkable single gift of English Furniture ever presented to the Museum". The bequest also included just over twenty 17th, 18th and early 19th century portraits and figure studies, in pastel and in oil, as well as a selection of still lives and animal pictures.

Historical significance: This painting closely relates to the hunting scenes by Ludolf de Jongh, a slightly older pupil of Saftleven and as such must be dated around 1655, before Hondius move to Amsterdam. It has long been discussed whether this work was by Hondious himself or de Jongh as it shares many similarities with de Jongh's contemporary hunt scenes. However, de Jongh rarely made big scale format or only when he collaborated with another painter (see Joris van der Haagen and Ludolf de Jongh, Hunt scene, ca. 1665, panel, whereabouts unknown) producing thus somewhat different compositions. Hondius on the other hand executed a series of hunting scenes during the 1650s that correspond to the present painting in style and compositions. The Halt of the chase, ca. 1655, whereabouts unknown, shows a particular close composition with a horseman astride and dogs and human figures at his feet around him. Like in the present picture, the whole company stood on the edge of a wood with a distant mountain receding towards the horizon on the left hand side. Another close composition by Hondius is the Rest of the Hunt, ca. 1654, whereabouts unknown. Both these paintings have the same dimension as the present one. Moreover one can notice that Hondius' work presents a more hard-surfaced and less supple quality to his forms than in de Jongh's works. In this painting, for instance, the figures as well as the animals are quite wooden and stiff. And yet it remains one incongruity which is the signature missing: Hondius tent indeed to sign and date his works of this period.

Genre painting involving low class society, especially peasants but also as the decades progressed and the demand for such pictures evolved more elevated class exponents, became more and more popular throughout the 17th century in the Netherlands. These pictures usually depict scenes of everyday life set in domestic interiors or in the countryside. Scholars are still debating whether they bear a metaphorical meaning and hidden messages, or just feature a close depiction of contemporary events. In both case they are associated with health, pleasure and liberty. Dutch genre painting is also closely related to popular literature and culture, of which proverbs form a very important element. Amsterdam occupies a central place in the history of Dutch genre painting as the city attracted provincial painters from all over the country. However the demand for these pictures was intense and the category developed in almost every well known town (Leiden, Delft, Haarlem, Utrecht and The Hague). The chief leading figures of genre painting in Holland were Jan Steen (1626-1679), Frans van Mieris (1635-1681) and Gerard Ter Borch (1617-1681). Derivative artists like Richard Brakenburgh (1650-1702), Willem van Mieris (1662-1747) and Matthys Naiveu (1647-1726) survived to continue the tradition of genre painting into the eighteenth century. 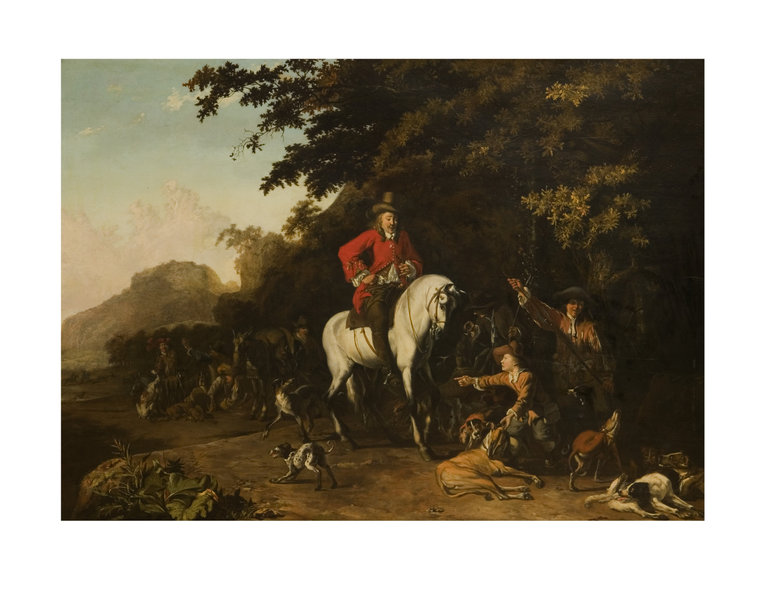