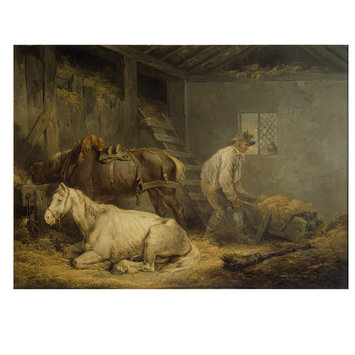 Horses in a stable

This oil painting is one of a large group of objects bequeathed to the Victoria and Albert Museum by Rev. Chauncey Hare Townshend in 1868. It was painted by George Morland (1763-1804) and is signed G. Morland, 1791.

Morland showed a talent for painting at a very young age and exhibited chalk drawings at the Royal Academy as early as 1773, aged only ten years old. He was apprenticed to his father, the painter Henry Robert Morland (1716-1797), for seven years from 1777. During that time he was chiefly employed in the copying and forging of paintings, particularly seventeenth-century Dutch landscapes.

Between 1786 and 1790 Morland established his reputation as a painter of moralizing and domestic genre subjects. From 1790 onwards his focus shifted to rustic genre subjects, notable for their conspicuous lack of incident. This painting is typical of this sort of work and shows the way in which Morland managed to depict such subjects without over-sentimentalising them.

Morland had a prolific output, reputedly painting more than 800 works in the last eight years of his life but his extravagant life-style meant he was often plagued by debt. His paintings were extremely popular and widely copied by engravers to meet the demand that existed for his work in Britain, France and Germany.

The scene takes place within a stable. To the left are two horses: a brown one feeding from a wooden trough, still wearing harnesses and a white/grey one lying down, tied by a rope to the trough the other feeds from. To their right, a young man stoops to push a wooden barrow full of straw/hay, a broom lies on the hay-strewn floor in front of him. Behind the man is a wooden ladder/ramp leading up to the hay-loft. There is a window in the far wall of the building through which can be scene blue sky and clouds. An earthenware jug sits on the window sill.

G Morland 1791
Signed and dated, right hand side, above and to the right of the wheel barrow.

"Chauncy Hare Townshend 1798-1868
Born 20 April 1798 of a wealthy family, only son of Henry Hare Townsend of Busbridge Hall, Godalming, Surre. Educated at Eton and Trinity Hall, Cambridge (BA 1821). Succeeded to the family estates 1827, when he added 'h' to the Townsend name. He had taken holy orders, but while he always referred to himself as 'Rev.' on the title pages of his books, he never practised his vocation... . Very much a dilettante in the eighteenth-century sense, he moved in the highest social and literary circles; a great friend of Charles Dickens (he was the dedicatee of 'Great Expectations') with whom he shared a fascination of mesmerism... Bulwer Lytton described his life's 'Beau-deal of happiness' as 'elegant rest, travel, lots of money - and he is always ill and melancholy'. He died 25 February 1868. Of the many watercolours and British and continental oil paintings he bequeathed to the V&A, the majority are landscapes. He is the first identifiable British collector of early photographs apart from the Prince Consort, particularly landscape photography, and also collected gems and geological specimens."

In 1791 George Morland exhibited at the Royal Academy (no.58), Inside of a stable (from the address : 63, Charlotte St., Rathbone Place); this painting is now in the Tate Collection. This V&A picture, called by the museum simply Horses in a Stable is dated 1791. It is notable that later, in 1794, Morland exhibited a painting at the RA with the title Interior of a stable (no.169), and that additionally the Department File for this painting records that in 1958 a member of the public sent in a photograph of an oil painting in their possession with a similar compostion, "except that the foreground horse is lying in the opposite direction". [The painting was later examined in the museum (see Registered Papers 58/76)]. The subject of the interior of a stable was therefore one much repeated, with variations, in Morland's work. After 1790 Morland chose to move away from the strong narrative content of his ealier paintings, and had begun to paint scenes of everyday life that were almost entirely without incident. From this date Morland was also living in the rural village of Paddington, opposite the White Lion inn, which was used by drovers en route for London. In this setting he found many of the subjects for this new type of painting, and it is likely that this scene was inspired by observing the life of the inn on a day-to-day basis. The Departmental File records that a member of the public owned a pencil drawing (signed and dated 1791) of the boy and the wheelbarrow.

Oil painting on canvas, 'Horses in a Stable', George Morland, 1791

no.16
George Morland : an exhibition of paintings and drawings, London : Arts Council of Great Britain, 1954 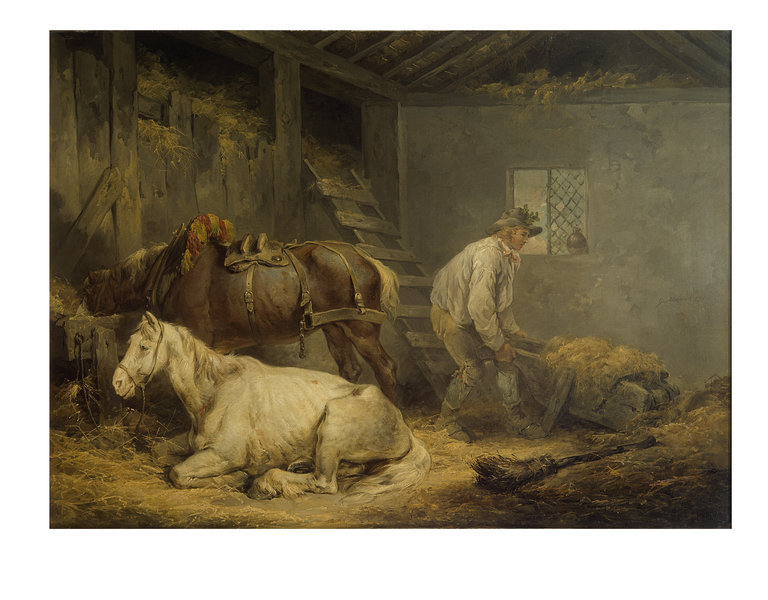