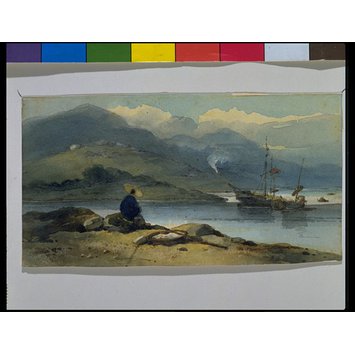 A Chinese River, with a figure on the bank

Watercolour entitled 'A Chinese River, with a figure on the bank'.

China (The artist was British born but spent the majority of his career living and working in India and the Macau region of China, amongst other parts of Asia., painted)

Bequeathed by James Orange, 1928
According to a letter of 1978 on the Departmental file from Geoffrey W. Bonsall, then Director, Hong Kong University Press, and a further e mail from 2000, James Orange was "one of the founding partners in the long-established firm of architects in Hong Kong, Leigh & Orange". Orange wrote a number of works relating to Chinnery and his work, including, the publication of the collection of his friend, the broker Sir Paul Catchick Chater (1846-1926) The Chater Collection, pictures relating to China, Hong Kong, Macao, 1655-1860, London 1924 [copy in NAL]; and 'The life and work of George Chinnery in China', The Studio, Vol.80 (1920) and Vol.94 (1927). According to the catalogue for the exhibition by the Arts Council Scottish Committee (1957), George Chinnery 1774-1852, the Chater collection at Hong Kong disappeared during the Japanese occupation during World War II. James Orange bequeathed to the Victoria & Albert Museum eighteen works by Chinnery from his own collection; two portrait miniatures (Museum numbers P.36 and 39-1928), two oils (Museum numbers P.37 and 38-1928), 14 watercolours and 3 drawings (Museum numbers P.40 to 53-1928, and E.2306-2308-1928), and six sketchbooks (Museum numbers E.1221 to 2300-1928, Pressmarks 92.D.12 to 17). James Orange's collection of orientalia was sold at Sotheby's July 11, 12, 1928 by order of his daughter, Miss E M Orange.

Historical significance: George Chinnery (1774-1852) was born in London, the son of a writing m aster with artistic ambition, who exhibited portraits at the Free Society of Artists in 1764 and 1766. George established himself as a miniature painter (small portraits in watercolour on ivory), exhibiting miniature portraits at the Royal Academy from 1791 to 1795. In 1796 he moved to Dublin, where he had some relations, marrying there in 1799. He began to paint landscapes and large portraits in oil. The abolition of the Irish parliament in 1800 led to many of Dublin's wealthier inhabitants to leave the city, and perhaps for this reason, fearing the loss of potential patrons, Chinnery also departed the city. In 1802 he received permission from the East India company to travel from England to India, where he worked as a painter, leaving his wife and children behind in Britain. He was initially based in Madras with his elder brother, a merchant and employee of the East India Company. Gradually he received more prestigious portrait commissions, and by 1812, he was established in Calcutta as the principal Western artists in the capital of British India. His wife rejoined him there in 1818. While in India he made many sketches in pencil of local life, people engaged in their everyday activities, and painted scenes of local architecture in watercolour. Although he was successful and well paid, he was often in debt. In 1825 he abandoned his wife and creditors and sailed for China. He was based in the Portuguese enclave of Macau, which was to be his home for the rest of his life, apart from visits to Canton (modern Guangzhou), Whampoa and Hong Kong. Trade between China and the West was centred on Canton, but Western merchants were only allowed to stay there briefly, and their families were based in Macau. As in India, Chinnery sketched local scenes in pencil, painting finished topographical scenes in watercolour and in oil back in his studio. He received commissions however for portraits of British merchants, especially those associated with the firm of Jardine, Matheson, and also painted Chinese, Portuguese, American, Swedish and Parsi sitters. Chinnery's Chinese sitters included many Cantonese "hong merchants" who were responsible for all dealings with Western traders. As Hong Kong developed in the 1840s the Western traders and their families began to move from Macau to the new settlement. But Chinnery chose to stay in his home in Macau and died there in 1852 from a stroke.

During Chinnery's last years in China he had a number of Chinese followers, who painted in the European style. As these artists frequently copied his pictures, both portraits and landscapes, and Chinnery himself painted copies of his own works but rarely signed his paintings, inevitably there have been difficulties in securing attributions to Chinnery. The attribution of this painting to Chinnery however has not been questioned.

Chinnery moved to Macau in 1825 at the age of 51. From 1803 until 1830 he had sent no works for exhibition at the Royal Academy, and when he began exhibiting again in 1830, from China, he sent only portraits rather than street scenes such as this one. Chinnery spent much of his time in Macau observing and painting the landscape and life around him, sketching in pencil and working up watercolours and oils in his studio. However, even these worked up paintings were usually on a small scale, partly perhaps because there was a fashion for paintings that could fit the small rooms of the houses of his customers in Macau, Western merchants in the Chinese trade, doctors and the military. It has also been suggested that it was because of his weakened health, though it may also have been the expense of paying for imported materials. But it has been noted that as his works became smaller in scale they became more simple and delicate even when painted in oil. Street scenes such as this one and P.28-1962, were painted either for his own interest or for the expatriate market in and around Macau.

Museum number E.2209-1921, a page in one of Chinnery's sketchbooks in the V&A, shows the umbrella and the figures near it. What is apparently the same umbrella occurs in other sketches by Chinnery in the V&A, as do the railings etc. The railings are those of the church of San Domingo at Macau.

Watercolour entitled 'A Chinese River, with a figure on the bank' by George Chinnery. British School, China, ca. 1825-1852. 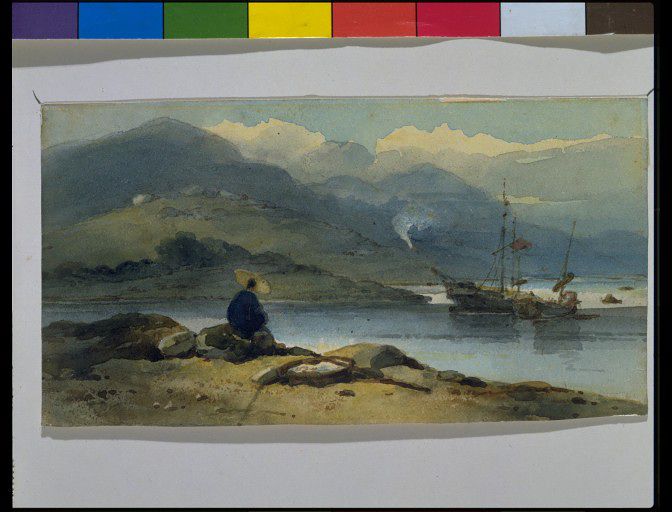