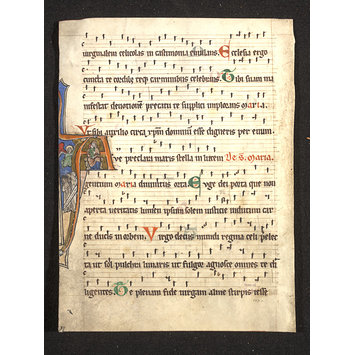 This manuscript leaf would once have been part of an illuminated choir-book. It was not unusual for portraits of those who had commissioned a luxury manuscript to be included in its decoration. This may account for the group of three nuns appearing in the left margin of this particular leaf.

Next to the nun at the front of the group is written "Oda abba" which translates as “Abbess Oda”. She holds in her hand a scroll, which bears the opening words of the main text found on the page: "ave preclara maris stella". In being pictured holding this text the abbess demonstrates her piety by reminding the viewer that she sings from this choir-book as part of her daily devotion. Her image also creates a connection in the mind of the viewer between herself and the Virgin Mary, whom the text on the page is venerating and who is pictured in the initial ‘A’ close by.

This manuscript leaf was part of a collection of unrelated illuminated leaves and cuttings purchased by the museum in 1874 from J. and S. Goldschmidt.

Leaf of parchment or vellum ruled to accommodate 10 lines of text with accompanying musical notation in ruled staves above each line. The text is Gothic Book Script (textualis) and written in black ink. The musical notation is also in black ink and the page rulings are in brown ink. The height allocated for each line of text is equivalent to half the height of each musical stave occuring above it.

The body of text includes an historiated initial 'A' (starting off the fifth line of text down from the top) and six minor initials in alternate red ('E', 'V', 'V') and green ('T', 'E', 'T') ink. The green minor initials have tiny embellishments in red ink. The word 'Maria' appears three times on the page, twice it is written with the second and fourth letters ('a' and 'i') written in red. The third time it occurs it is part of a rubric at the end of the fifth line of text (and therefore written completely in red).

The letter 'A' that is historiated is in red with a black ink outline and whispy decoration in the form of white lines. The apex of the 'A' has a tiny animal head facing toward the main body of text to the right. Within the 'A' is a representation of the Virgin and Child. The Virgin is seated on an Empirical-looking throne (similar to those seen in Carolingian manuscripts) with the Christ-child on her lap. His right arm is raised, taking his mother's face in his hand and pulling it toward his own up-turned face so that they touch cheeks.

The Virgin wears a brown cloak (decorated with white dots arranged in clusters of three) over a blue robe and has a halo which is formed of the same layer of burnished gold leaf forming the background in-fill for the scene. The halo is differentiated from the background by way of a series of 9 tiny circles stamped into the goldleaf forming a curved line around the Virgin's head. The Christ-child is dressed in green and has a cruciform halo.

The left-hand downward stroke of the letter 'A' extends down and out to the left edge of the page and an extension from the apex of the letter extends out and up in the same direction. This has the effect of cordoning off an area of the left margin. Within this space are more figures.

At the same level as the Virgin and Child is an angel, dressed in green, and in the act of swinging a censer. Beneath the angel are three nuns dressed in white robes and white, cross-hatched, head-dresses. All three have their hands raised and look up toward the Virgin and Child. The nun at the front of the group holds a banner in her hand which has written on it in black ink: "ave preclara maris stella". In a pink/brown triangle of colour, beneath the gold ground of the historiated initial and on the inside of the extended downward stroke of the 'A', the words "oda abba[tissa]" have been added in white ink. Above the head of the central nun is a final addition in white ink that reads "Giste".

Behind the nuns and the angel there is a blue background and to their right a strip of burnished gold leaf which runs parallel to the extended downward stroke of the letter 'A'.

Water-based pigments, ink and gold leaf on parchment or vellum

oda abba
Abbess Oda
In a pink/brown triangle of colour, beneath the gold ground of the historiated initial and on the inside of the extended downward stroke of the 'A' in white ink.

Giste
Above the head of the central nun in white ink

Purchased from J. and S. Goldschmidt as part of three portfolios (now Museum nos 234-296) designated as a 'Illuminations: a collection of 338 specimens, pages and cuttings' for the total sum of £100.0.0, received on 15 October 1872; passed on for Register in April 1874 (see Register of Drawings).
A duplicate number MS.20 was assigned to this object in error and was subsequently cancelled.

Historical significance: It was not unusual for portraits of those who had commissioned a luxury manuscript to be included in its decoration. This circumstance may account for the group of three nuns appearing in the left margin next to the historiated initial depicting the Virgin and Child.

Next to the nun at the front of the group is written "Oda abba" which translates as Abbess Oda. She holds in her hand a scroll which has the opening words of the main text the historiated initial begins ("ave p[rae]clara maris stella").

By being pictured holding this text the abbess not only demonstrates her piety by reminding the viewer that she sings from this choir-book as part of her daily devotion but also creates a connection in the mind of the viewer between herself and the Virgin Mary, who the text is venerating and whom is pictured in the initial close by.

The thirteenth century saw a surge in Marian devotion in medieval Europe, a circumstance shown most overtly in the emergence of the Book of Hours, whose central text was the Little Office of the Blessed Virgin, as an independent book of daily devotion. By being pictured with two other nuns, there is also the additional suggestion that the piety of others is guided by the abbess.

MASS
With the Divine Office the Mass forms the basis of Christian Liturgy. It centres on the Eucharist and was attended daily by those in religious orders, the clergy and, with varying frequency, by members of the laity.

Kyriale - the portion of a Gradual containing the ordinary chants of the Mass (i.e. the chants whose text remains unchanged throughout the ecclesiastical year)

DIVINE OFFICE
With the Mass the Divine Office forms the basis of Christian Liturgy. It is a cycle of daily devotions - the prayers of the canonical hours - performed by members of religious orders and the clergy.

The above is adapted from Understanding Illuminated Manuscripts: A Guide to Technical Terms by Michelle P. Brown (London, 1995)

Leaf from a choir-book with historiated initial A depicting the Virgin and child adored by an Angel with a censer and three nuns dressed in white; Southern Netherlands; 1200-50.

Monasteries and convents maintained a
continual cycle of services or ‘Offi ces’. This
leaf came from a choirbook for a convent.
The abbess, Oda, is shown leading nuns
in the singing of an antiphon. An angel
is wafting incense over an image of the
Virgin and Child enthroned. 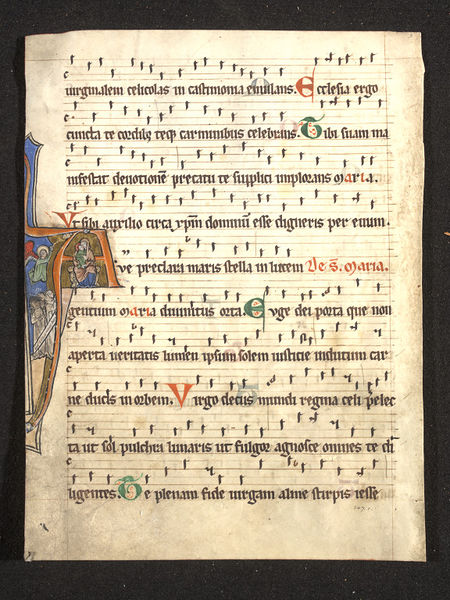