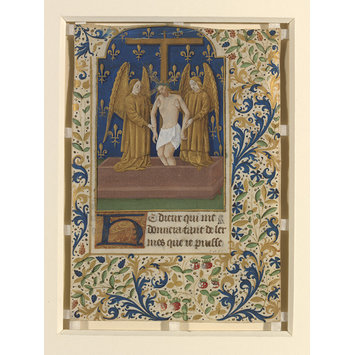 Cutting from a Book of Hours

This miniature shows the body of Christ supported in the tomb by two angels. It was probably cut from a page of a Book of Hours: the standard book of popular devotion during the later Middle Ages and Renaissance. Its central text, the Little Office of the Blessed Virgin (or Hours of the Virgin), is modelled on the Divine Office. It represents a shorter version of these daily devotions performed by members of the religious orders and the clergy at the eight canonical hours.

Books of Hours were often lavishly decorated and each of the eight divisions of the text was usually marked by a full page miniature. These sometimes depicted scenes from Christ’s childhood but subjects such as this one, drawn from the story of Christ’s Passion and Resurrection, were not unusual.

This illuminated miniature with decorative border and text has been cut from the leaf of a medieval manuscript - it would have originally been part of a larger page surrounded by blank parchment/vellum.

The miniature in the top left quarter of the fragment depicts the figure of Christ with his eyes shut, wearing a crown of thorns. He is flanked by two angels who support his body under his arms, the angel to the left does this with its left arm and the angel to the right with its right arm. With their other arms the angels support Christ's forearms. Both angels have long robes and wings painted in a light yellowy-brown with gold ink over the top adding highlights and decorative details to their costume - the over-all effect is one of muted gold. The same gold ink has been used to create thin straight rays emanating from Christ's head.

All three figures rise from an open rectangular tomb. This is completely plain but has an almost Classical, sarcophagus look to it and is painted in a pinky-brown hue. Behind the figure of Christ is a simple cross, painted in the same yellowy-brown colour as the underpainting of the angels' wings and robes. This scene has a plain green ground around and beneath the tomb and a vivid dark blue background with a repeat pattern of gold fleur-de-lis behind the three figures.

The whole scene is outlined in a gold ink border which has straight left, right and bottom sides and a convex, curved edge at the top. The curved top edge extends to the top of the fragment. Outside this outline is a further gold ink border which parallels the left and right edges of the inner border but extends further down the page to enclose a deocrated initial 'H' and three lines of text directly beneath the minature.

The decorated initial is in red on a blue ground with foliate gold chrysography decoration akin to that on the robes and wings of the angels. The three lines of Gothic Book Script (textualis) to the right of the initial are in brown ink and were perhaps once gone over with gold ink - the luminosity of which has now gone.

The miniature and text is surrounded by a decorative border which fills the remainder of the fragment. The decoration incorporates small spherical and conical red alpine strawberries, tiny blue flowers and various types of foliage in blue, green and gold.

Tours (probably, made)
Loire Valley (made)

The Book of Hours was the standard book of popular devotion during the later Middle Ages and Renaissance. Its central text, the Little Office of the Blessed Virgin (or Hours of the Virgin) is modelled on the Divine Office and represents a shorter version of the devotions performed at the eight canonical hours of Matins, Lauds, Prime, Terce, Sext, None, Vespers and Compline.

The text, known from the tenth century, was originally read only by ecclesiastics; it entered into more popular use by the end of the twelfth century, often being attached to the Psalter (the book more commonly used for private devotions before the emergence of the Book of Hours). The private recitation of the Little Office of the Virgin is an expression of the lay person's desire to imitate the prayer-life of the religious.

The Little Office of the Virgin gradually expanded to include other elements such as a liturgical calendar, a litany of saints, suffrages, the Office of the Dead (which had emerged by the 9th century), the Penitential Psalms (psalms 6, 31, 37, 50, 101, 129 and 142 - these were first included in Books of Hours in the thirteenth century), the Gradual Psalms (Psalms 119-133) and prayers. Additional offices, such as the Short Office of the Cross, Hours of the Holy Spirit, Hours of the Trinity and Hours of the Passion could also form part of a Book of Hours.

The earliest independent Books of Hours date from the middle of the thirteenth century. The standard form established at that time continued in general use until the sixteenth century and was particularly popular in France and the Low Countries. The texts of Books of Hours were less variable than those used in the Divine Office itself but still varied slightly in accordance with the 'use' ( Use = the liturgy practiced in a particular geographic region or by a particular group of people) for which the manuscript was made.

Books of Hours were medieval best-sellers and have survived in relatively high quantity. They are nearly always illuminated, in a manner reflecting the patron's budget, and often contain a miniature or set of miniatures for each major textual division. The subjects illustrated could include scenes from the life of the Virgin, Christ or King David, depictions of the saints and themes relating to death and judgement.

The above text is taken (often in large chunks, word for word) from Understanding Illuminated Manuscripts: A Guide to Technical Terms by Michelle P. Brown (london, 1994) and Books of Hours by Janet Backhouse (London, 1985).

'3015 (MS 8833)
BOOK OF HOURS
Leaf, cropped to edge of border decoration, with half page miniature (two angels in a tomb before a cross holding a figure of Christ Crucified, background of fleur-de-lys) for the vision of St Gregory, 3-line decorated initial H (blue letter-shape on red ground with brushed gold acanthus, strawberry plants and flowers

Leaf from a Book of Hours; Miniature of the Body of Christ supported in the tomb by two angels with a background of gold fleurs-de-lys on blue and border of flowers, strawberries and foliage; small letter H in blue on a red ground; Tours or possibly the Loire Valley (France); ca 1480.

no. 72
Watson, Rowan. Vandals and Enthusiasts: Views of Illumination in the Nineteenth Century, London : Victoria and Albert Museum, 1995

The popularity of the ‘Man of Sorrows’
image, as seen here, reflected an
increasing tendency for worshippers
to empathise with Christ’s suffering.
The angels hold up the dead body
of Christ, encouraging readers to
meditate on his sacrifice.

France, Tours or
the Loire Valley
Ink on parchment, with
watercolour and gold
Museum no. 3015 [2009] 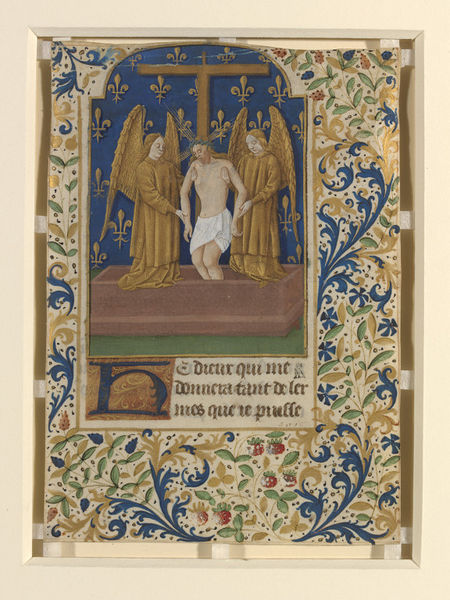