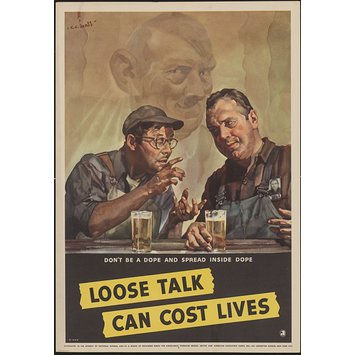 'Loose Talk Can Cost Lives', World War II poster warning against careless talk, depicting two men dressed in overalls, talking at a bar. One wears a cap and glasses, and is gesturing with his hands, while the other wears an identification badge with his photo and work number. Each has a pint of beer, and are pictured as though we are looking over the bar at them. Behind them, as if made of smoke, looms the smiling face of Hitler.

The area where the bar would be is printed black, and at the top of this area, immediately below the image, printed in white, is the message, 'Don't be a dope and spread inside dope'. Below this, printed in black on a yellow 'banner' is the slogan, 'Loose Talk Can Cost Lives'.

'DON'T BE A DOPE AND SPREAD INSIDE DOPE'
Immediately below the main image, printed white on black

'LOOSE TALK / CAN COST LIVES'
Below the image, printed in black against a yellow tape or banner

'ART'
Symbol made of an eagle's head, forming the letter 'a', with the letters 'ART' below, within a squared oval, lower right corner 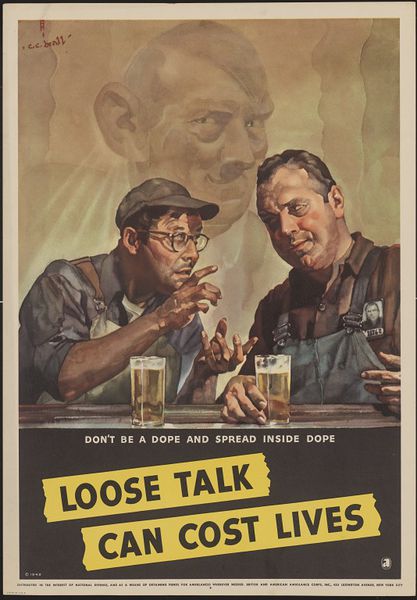