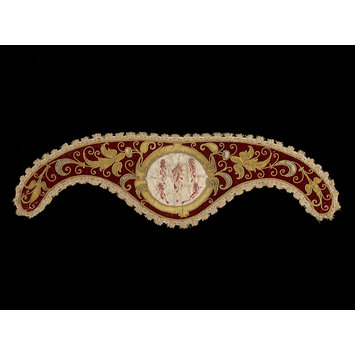 This collar would have complemented a dalmatic, the priestly garment worn by deacons involved in Christian ceremonies. It is made of red silk velvet, to which has been applied a white satin oval embroidered in brown and red. It has lost the cords that were usually attached to the front in order to tie it in place.

It shows the Five Wounds of Christ, or the stigmata. These wounds were the marks from his crucifixion — one to each hand and foot where he was nailed to the cross, and one on his right side where he was pierced with a lance. They drew attention to the suffering he experienced on behalf of mankind.

During the Counter-Reformation from the second half of the 16th century, the Catholic Church encouraged the revitalisation of the arts and in particular their role in arousing intense emotion. In Spain, the country at the forefront of the Counter-Reformation, the Holy Week processions which preceded Easter used a sculpture of Christ crucified and taken down from the cross to produce public fervour among the faithful. The embroidered wounds on this collar are an evocative shorthand for this vivid three-dimensional imagery. A largely illiterate popular audience would have easily understood the reference.

Collar of red silk velvet with embroidered appliqué work in yellow, cream-coloured and blue satin; in places the cream and yellow satin appear tinted with blue water-colour. The pattern is outlined in red and yellow silk cord. In the middle (central back of collar when worn) is the cream-coloured oval panel on which the Five Wounds of Christ are embroidered in fawn and red silk; the oval is surrounded by a yellow appliqué frame which leads the eye towards the stylised appliqué leaves in yellow and blue satin on either side of this central motif. There is a layer of stiffening (paper?) between the appliqué and the velvet base. Round each applied satin motif there is sewn fine yellow silk cording. The collar as a whole is trimmed round the edge with a pinkish yellow silk fringe and lined with glazed blue linen, which is tacked on to the front with red running stitches, visible on both sides. The linen is worn with patches of the original natural colour showing through the blue dye. On the back there are signs that cords for tying the collar in place were once attached (by blue thread), as the tension exerted during tying has created circular worn patches. The cords are no longer attached. The red velvet reveals few signs of deterioration, while the creamish satin is cracked both horizontally and vertically and in certain instances has been repaired.

The Five Wounds are embroidered in two colours suggestive of fresh and drying blood. They are positioned to indicate the wounded parts of Christ's body when he was taken from the cross: the wounds inflicted by the nailing of his hands and feet and the lance wound in his side. This last is the central motif, depicted as a slash. From each wound blood spurts.

Small note on back indicating a price (30/-) and the number and name of the garment: No. 102 Spanish Collar of a Dalmatic.

Bought for £1.10.00 in 1900 from Debenham and Freebody, Wigmore Square, London W. 35 specimens of embroidery were sent to the museum on 15th October 1900 on approval; the Keeper requested an invoice for the 15 he wished to acquire on 3 November 1900. Their acquisition prices ranged from 3/6 for each piece of Persian netting to £7.7.0 for a Persian Prayer Mat. At £1.10.00, this collar fell at the lower end of the spectrum. (RP 89887/1900). [To put this sum into context, it is worth remembering that at the turn of the century, Maud Pember Reeves found that many working class families survived on an income of just £1 per week].

Historical significance: This collar is significant as a example of the impact of the Council of Trent (1545-63) on the design of vestments. While the Council's impact on sculpture and painting is well covered in existing literature on the plastic arts, its interpretation in textiles has largely remained hidden within specialist textile histories (Susan Verdi Webster's work is a recent exception to the rule). This divorce of textiles from the larger picture is unfortunate as priestly appearance was part of the ceremonial around those other more durable objects, and part of the experience of the faithful.

The creation of embroidery and the learning of embroidery skills followed a similar path to that of sculpture and painting, and recently serious research has begun on its professional development in certain local centres (e.g. Marta Laguardia's work on Salamanca). Basically, skills were learnt through apprenticeship in a guild and groups of objects were made according to similar specifications (e.g. the workshop of the sculptor Gregorio Fernandez or that of the painter Francisco Zurbaran). Successful execution of standard imagery was valued (where today 'creativity' and 'originality' are highly prized). In some cases, embroidery was learnt in convents and nuns were skilled needlewomen who could make vestments.

The Museum owns at least 24 Spanish dalmatic collars made in the 16th and 17th centuries, all acquired between 1870 and 1940. They were presumably purchased for their decorative qualities, and the fine embroidery that adorns them. The imagery varies from purely decorative to symbolic. It seems likely that collars may have survived intact longer than other parts of the dalmatic which may have become damaged during church services or been recycled at a later date.

This collar would have complemented a dalmatic, the priestly garment worn by deacons involved in Christian ceremonies. In Spain it became established in the 16th century in place of the amice (Pauline Johnstone. High Fashion in the Church. Leeds: Maney, 2002, p.142). This collar has lost the cords ending in impressive tassels that were usually attached to the front in order to tie it in place. The five wounds gushing blood, embroidered on this collar, represent the Five Wounds of Christ, or the stigmata. These wounds were the marks from his crucifixion - one to each hand and each foot where he was nailed to the cross, and one on his right side where he was pierced with a lance. They drew attention to the suffering he experienced on behalf of mankind. It was probably made in a professional embroidery workshop or in a convent where nuns engaged in the making of ecclesiastical vestments.

Collars such as this one are often depicted in paintings of St Lawrence who died before becoming fully ordained as a Catholic priest; the combination of dalmatic and collar indicate his status as a deacon. Such depictions show that the collar fitted high around the neck of the wearer, curving round the neck so that the maximum height was at the back; the rounded front edges tied together by means of cords attached at each end and completed by a large tassle. Often the imagery or decoration on the collar echoed that of the panels on the front, back and sleeves of the dalmatic, although in miniature because of its size. Good examples appear in two paintings of St Lawrence by Francisco de Zurbaran, the first (1636) is a front view in The Hermitage, St Petersburg and the second (1638-9) is a side view in the Museo Provincial de Bellas Artes, Cadiz. The depth of colour of the dalmatic in the first of these paintings suggests it may represent quite closely the original ensemble which this collar would have complemented. Both are illustrated in Jonathan Brown. Zurbaràn. New York: Harry N. Abrams, Inc., 1991, pp.24 & 100.

During the Counter-reformation in the second half of the sixteenth century and thereafter, the expression of intense emotion was expressed through a variety of religious artefacts, from painting and sculpture to ecclesiastical vestments. The Council of Trent (1545-63) revitalised religious art in order to arouse religious fervour. The imagery on vestments was therefore part of a wider movement in the plastic arts. For example, in Spain, the great power at the forefront of the Counter-reformation and the likely source of this collar, the Holy Week processions which immediately preceded Easter used sculpture of Christ crucified and taken down from the cross to excite emotion in the ordinary people who lined the streets. For much of the year, these sculptures were kept in their own chapels within churches, where they could be venerated. In such pieces, the agony of Crucifixion was evident because the wounds were so realistically depicted on carefully carved representations of human bodies with horrendous gashes of red wounds. The wounds on this collar are an evocative shorthand of this vivid three-dimensional imagery and would have been easily understood by a largely illiterate popular audience. (See for example some of the work of the Castilian sculptor Gregorio Fernandez in Juan Jose Martìn Gonzalez. Escultura Barroca Castellana. Madrid: Fundaciòn Làzaro Galdiano, 1959, p. 155, Fig. 88 Christ on the cross (Valladolid, Iglesia del Carmen); p. 56, Fig. 89 and 90 Cristo yacente (Segovia Cathedral and Valladolid, Museo Nacional de Escultura Policromada, originally from San Neri, Madrid; p. 157 fig. 91, Cristo yacente (Valladolid, Convento de Santa Ana) For Andalusia, see Susan Verdi Webster, Art and Ritual in Golden-Age Spain. Princeton: Princeton University Press, 1998, p. 96, Francisco Antonio Gijòn, Cristo de la Expiraciòn, 1682; p. 115, Fig. 40 Cristòbal de Morales, El entierro de Cristo, early 16th century)

Attribution note: Unique in the sense that made to commission, but probably from a range of fairly standard design options. Probably duplicated on the other vestments in the set.
Reason For Production: Commission 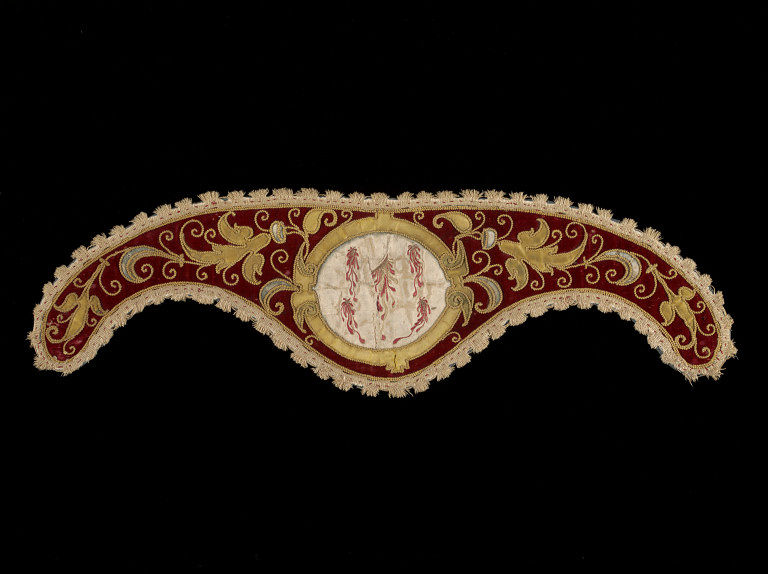