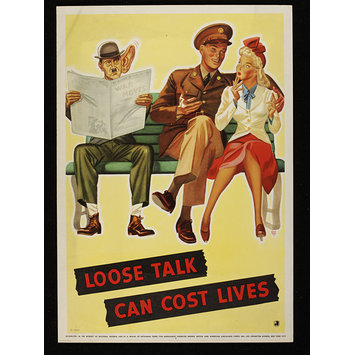 This American poster uses humour to be inclusive, playing on the idea of the incongruity of Hitler turning up in disguise (here in an ill-fitting suit) in a mundane setting, listening in to private conversations. The serviceman is trying to impress his girl by passing on information that may seem innocent, but Hitler's newspaper reminds the viewer that in war any news might prove fatal if it falls into the hands of the enemy.

'Loose Talk Can Cost Lives', World War II poster warning against careless talk, depicting of a soldier and girl on park bench. The soldier, dressed in a brown army uniform, with peaked cap, has his arm around a blonde woman, as he talks and smiles at her. The woman, dressed in a red skirt and hat, blue blouse, and yellow jacket, appears to look at him in awe. Her gaze is difficult to decipher, and she may be looking towards a third person on the other side of the man, also seated on the bench; a caricature of Hitler. He is wearing an ill-fitting green suit, and a bowler hat, and he holds up a newspaper. His left ear is greatly enlarged, indicating that he is eavesdropping on the young man. The scene is set onto a yellow background.

Below the image, printed in red on a black 'banner' is the slogan, 'Loose Talk Can Cost Lives'.

'LOOSE TALK / CAN COST LIVES'
Below the image, printed in red against a black tape or banner 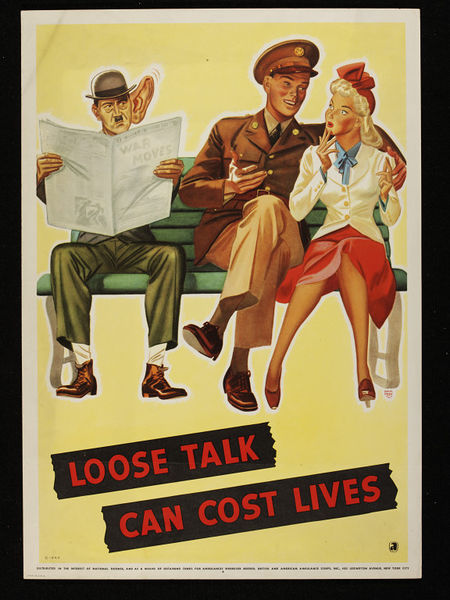