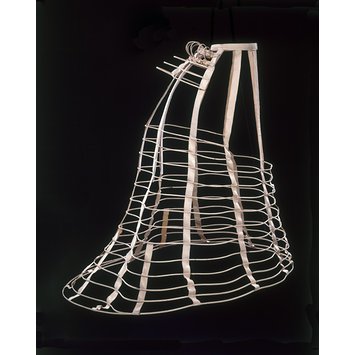 Crinoline cages were worn under skirts to distend them and preserve their fashionable shape. It is not difficult to see why some cage crinolines were known as "skeleton" petticoats. The undulating bands of spring-steel circle the void like a grotesque ribcage. Buoyancy is ensured by the lightness of the steel and the fact that each graduated hoop passes through a stitched opening in the vertical tapes. These tapes are attached to a waistband so that the crinoline sways with the movement of the wearer.

An advertisement in the Illustrated London News of 1865 extolled the virtues of a similar crinoline:

"…so perfect are the wave-like bands that a lady may ascend a steep stair, lean against a table, throw herself into an armchair, pass to her stall at the opera, and occupy a further seat in a carriage, without inconveniencing herself or others, and provoking the rude remarks of observers…thus modifying, in an important degree, all those peculiarities tending to destroy the modesty of Englishwomen; and lastly it allows the dress to fall in graceful folds."

By the late 1860s crinolines were becoming smaller than the earlier bell-shaped cages. The focus of the skirts has shifted to the back of the body with a distinctive flattening at the front and frequently a slight train at the hemline. To support this silhouette the crinoline diminished in size and, as in this example, sometimes gained a spiral coil of spring-steel at the waist to form a bustle.

This crinoline was widely advertised in 1971. These adverts state that the design was 'invented by S.B. Garrard, 57 Westbourne Grove, Bayswater' and sold at Addley Bourne, 37 Piccadilly, London, a Ladies' Outfitter. In The Exchange and Mart, 14 June 1871, p. 740, the jupon was praised for '[doing] away with the unsightly results of the ordinary hoops. It is remarkably light, so that a lady may walk in comfort, ascend a steep stair, lean against a table, throw herself in an arm-chair, pass to her stall at the opera, or occupy a fourth seat in a carriage without inconvenience to herself or others; and, lastly, it allows the dress to fall into graceful folds, in which artists so much delight'.

Cage crinoline made of spring-steel hoops covered in linen. Undulating braid covered steel hoops passed through stitched loops in tapes which are attached to a waist-band. There are 14 graduated from ankle to knee and three at the centre back only, surmounted by a row of loops. The waist band is of tape with a polished steel clasp one half of which is attached to elastic.

'PRINCESS LOUISE JUPON PATENT'
Inscribed on the back of waist-band

Women had to wear many petticoats to support the full skirts fashionable in the late 1840s. These layers were inconvenient, and the search for alternatives began. The cage crinoline, introduced in 1856, was the most successful. It was made from a flexible framework of connected spring-steel hoops.

The waved steels in this crinoline encouraged the dress to fall in artistic, graceful folds. 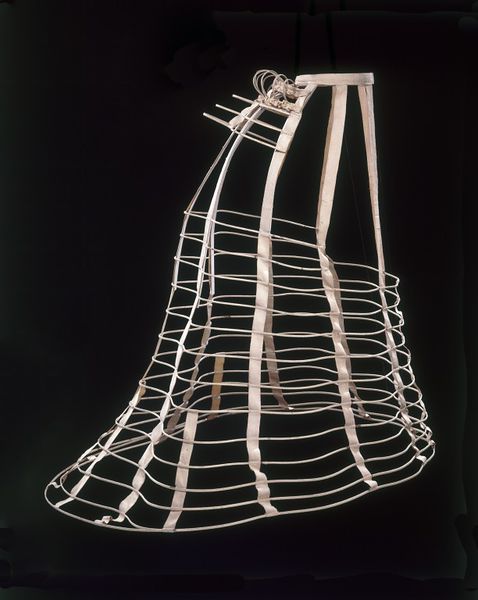