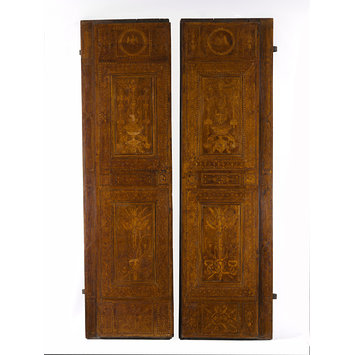 These doors came from the ducal palace of Gubbio in Umbria, Italy. The palace was built by Frederigo da Montefeltro (1422 - 1482), work starting in 1476 and continuing until 1488, six years after his death. It is probable that the doors were designed by Francesco di Giorgio Martini (1439 - 1501), the architect with overall charge of the building, and possible that they were made by Giuliano da Maiano (1432 - 1490), the leading Florentine woodworker of his day. The doors are decorated with the crowned eagle and and the flaming petard, a new type of explosive, which was the personal emblems of Frederigo, the leading mercenary soldier of Italy at this time. The doors are decorated with spindlewood ornaments on a walnut background, in a technique known as commesso di silio. This was a highly fashionable form of decoration in Italy from about 1440, particularly in ecclesiastical and domestic settings.

Pair of door leaves, decorated with commesso di silio (spindle wood ornament inlaid in a walnut background), and fitted on the reverse side with two iron rings that would have formed part of the hinges. A simple rectangular border, in the form of a zigzag frieze of tarsia a toppo (inlay made up of a mosaic of small pieces of different coloured woods), runs the length of the verso side of each leaf and forms the frames of four square panels of plain walnut, together with strips of different coloured woods that create an illusion of moulding. Each door leaf on the recto side is decorated with two large inlaid comesso di silio panels, contained in frames of inlaid scrolls edged with the same zigzag pattern, and separated from each other with smaller horizontal panels containing scroll patterns and flanked by small square panels containing rosettes. Of the larger panels, the upper one consists of a flaming candelabra on a square pedestal resting on lion’s feet. Behind the flame at the top is a swag of laurel from which there hangs a drop at each end, consisting of fruit, foliage and beeds, as well as a flaming petard, one of Frederigo da Montefeltro ( 1422 – 1482) personal emblems and a new form of explosive used in sieges. The lower panel consists of a radicchio-like plant with large leaves and a long stalk, either side of which sprout foliate scrolls. At the bottom of each door-leaf are three panels, one larger one at the centre and two smaller ones at the sides, framing cruciform scroll patterns. At the top of each door-leaf is a circular wreath enclosing the crowned Montefeltro eagle, flanked by small panels at the side which match those at the bottom.

Each door leaf is made up of a central board, about 4.1 cm thick, to which are nailed two thinner boards deocratied with intarsia. The intarsia board on the recto side is about 2.4 cm thick and the one on the verso side is about 1.1 cm thick. Along the edges nearest the door frame runs a narrow strip about 21 cm wide on the recto side, with the zigzag border, arranged in an elongated hexagonal patterns which intersect.

These doors originally came from the ducal Palace in Gubbio. They were bought for £200 from Tito Gagliardi, a dealer based in Florence, in 1886.

Historical significance: Although it was once erroneously claimed that these doors opened into the Gubbio studiolo, they nevertheless came from this ducal Palace and were almost certainly made in the lifetime of Frederigo da Montefeltro (1422 - 1482). Frederigo was a highly successful condottiere or mercenary general, whose powerbases were his palaces in Urbino and Gubbio. His main paymaster, Pope Sixtus IV (reigned 1471 - 1484), made him a duke in 1474, and two years later he began to build his palace at Gubbio. Although a man of action, Ferderigo very much interested himself in the arts, astronomy and the classics, as well as building princely palaces. Those who enjoyed his patronage ranged from Leon Battista Alberti and Francesco di Giorgio Martini to Justus of Ghent and Piero della Francesca.

This door can be compared with other laid doors from Gubbio palace, such as those in the Abegg and Figdor Collections. As a fitting rather than a piece of furniture it has survived largely intact, a fine and rare surviving example, dating from the 1470s, of inlaid decoration in a domestic setting. It noteworthy that when Benedetto Dei wrote his description of Florence in his Cronaca in 1470 (Florence, ASF, MS 119), he singled out the intarsia masters to list by name. Among them was Giuliano da Maiano, whose workshop may have produced this door.

Double doors formed entrances to rooms and apartments of ducal residences, in this case the ducal palace of Gubbio, built by Frederigo da Montefeltro ( 1422 – 1482) during the last six years of his life. (The palace was completed by 1488, during the reign of his son and heir, Guidobaldo.) Although it is not known which room they came from, it is likely that it was decorated in much the same way as commesso side of the door leaves. On the other hand, the more sparingly decorated reverse sides of the door leaves indicate either that the room was less prestigeous or indeed more private. From about 1440, commesso di silio became a highly fashionable form of interior decoration: although it was prone to woodworm, loss of colour, and eventual removal from its domestic settings, it was still widely found in choirs and sacresties of churches from as far north as Brescia in Lombardy to as far south as Padula in Campagna. The finest examples to survive in a domestic, albeit princely, setting are probably the studiolo still in situ in Urbino and the one from Gubbio, which is now in the Metropolitan Museum in New York. Both were built for Frederigo during the 1470s and early 1480s: the former has been attributed in recent years to Benedetto da Maiano(1442 – 1497) and the latter to his elder brother, Giuliano (1432 – 1490). Although no drawings survive, it is quite possible that these doors were designed by Francesco di Giorgio Martini from Florence, the architect with overall charge of the building. A number of doors survive, including a richly inlaid example still in situ at Gubbio and one in the Abegg Collection in Riggisberg, Switzerland.

Pair of door leaves, spindlewood ornament inlaid in a walnut ground, and Tarsia a toppo mosaic decoration, designed by Francesco di Giorgio Martini, and possibly made by Giuliano da Maiano, Perugia, about 1480

Olga Riaggio: The Gubbio Studiolo and its Conservation. I. Frederigo da Montefeltro's Palace at Gubbio and its Studiolo, (New York, Metropolitan Museum of Art, 1999), fig. 4-40 (pp.63-66)
'The high quality of the wooden inlaid doors that Federico da Montefeltro commissioned for his apartment at Urbino suggests tht the same care was lavished on many of the Gubbio palace doors. Only two of them survive: one in the Abegg Collection, at Riggisberg, Switzeland, and the other in the Victoria and Albert Museum in London. A third one, in the Kunstgewerbe Museum in Berlin, was destoryed in World War II.
The Abegg door, which in 1930 wsa in the Figdor Collection in Vienna, is the more complete of the two and has the finer design and workmanship. Its eight front panels, which are carved with large rosettes and the Montefeltro ostrich, were perhaps a reflection of the coffered ceiling above. On the reverse four commesso di silio panels, which display candelabra and symmetrical flower sprays, enclosed by a broad frame of volutes and palmettes, are similar but not identical to motifs used in severl Urbino doors. Frequent use of Federico's emblems is typical of the Gubbio decoration, and in keeping with this, the Abegg door has a band across it with six roundels displaying devices, with four more on the top and bottom borders.
The Victoria and Albert Museum door was bought in Florence from the dealer Tito Gagliardi. its surface has suffered from being planed down, but its decorative designed, executed in commesso di silio, is still legible and has much in common with that of the Abegg door, suggesting that they came from the same Florentine workshop. The candelabra with festoons, hanging garlands, and birds is especially close to the motif on the door at Urbino between Federico's bedroom and audience chamber.

This door comes from the Palazzo Ducale at Gubbio and was acquired along with the sandstone doorway shown in room 12 (102-1886). The doorway was executed between 1474, when Federigo da Montefeltro, Duke of Urbino, became knight of the Garter, and the Duke’s death in 1482. The door, which is decorated with the eagle of Montefeltro, is likely to date from the same time. The door was stated at the time of acquisition to have given acces to the Studiolo of the Ducal Palace, now in the Metropolitan Museum of Art, New York. There is some doubt whether this tradition is correct.
[1967]
FOLDING DOOR
Inlaid work of various woods
URBINO; about 1471-1480
103, 103A-1886

This door comes from the Palazzo Ducale at Gubbio and was acquired along with the sandstone doorway shown in room 12 (102-1886). The doorway was executed after 1474 but before the death of Federigo da Montefeltro, Duke of Urbino, in 1482. The door, which is decorated with the eagle of Montefeltro, is likely to date from the ssame time. At the time of acquisition it was stated that the door had given acces to the studiolo of the Ducal Palace, a small room, now in the Metropolitan Museum of Art, New York; there is some doubt whether this tradition about its original placement is correct. Two further sandstone doorways from the palace are on display in Room 16 (101-1886 and 290-1886). [Pre-2006]

In recent years, the studiolo from the ducal Palace has been attributed to the workshop of Giuliano da Maiano (see references), so it is possible but by no means certain that his workshop also made these doors. It is likely, although there is no documentary evidence, that Francesco di Giorgio di Martini, the architect with overall responsibilty for the ducal Palace in Gubbio, took part in the design of these door leaves.

Attribution note: One of a pair 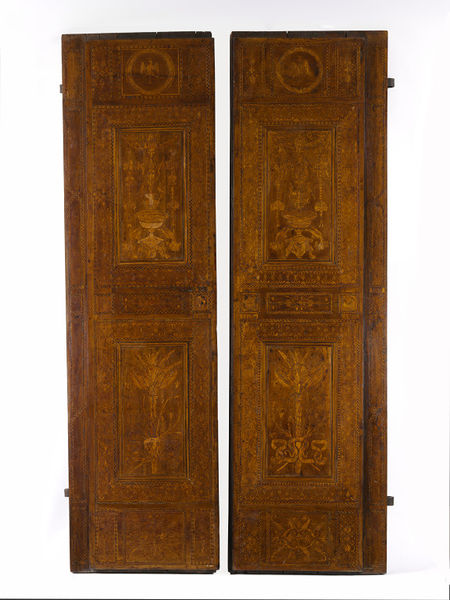