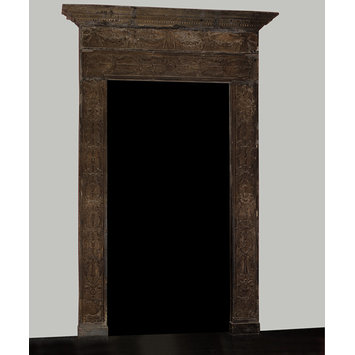 The present cornice of the door is a plaster cast from the companion doorway (101-1886), the original cornice having been destroyed by damp before its removal from the palace. The doorway comes from the Palazzo Ducale at Gubbio, where it formed the outer section of the doorframe of the main entrance to the great hall. Above is a shield with the arms of Montefeltro divided by a pale charged with the banner of the Church, and five eagles.

Doorcase of grey sandstone. Both jambs are decorated in low relief with three foliated stems, which rise from an acanthus plant at the base. The outer stems interlace at regular intervals across the central stem , which is interrupted by shells and other ornaments and terminated is an eagle (an emblem of the Montefeltro). The lintel is carved with two stems which interlace across a bar; in the centre is a rosette. Above is frieze of five spread eagles with festoons of laurels depending from them; in the centre hanging from a nail is a shield which bears the arms of Montefeltro. The shield conceals the central eagle almost completely. There are traces of blue pigment in the frieze. The cornice of this doorcase is missing (having been destroyed by the action of water)and has been replaced by a plaster cast of the cornice from doorway 101-1886. The bases of the jambs are also replacements.

Gubbio (made)
Urbino (possibly, made)

Purchased in Florence (Gagliardi, £150) from the Palazzo Ducale at Gubbio.
An account of the acquisition of this and two other doors is given in a letter by J.C. Robinson dated 24th November, 1884. "When I went to to Italy, on behalfof the South kensington and Birmingham Museums, , three or four years ago, these most important works of Italian quatro centro were brought to my notice in in Florence, to which they had been removed from their original situation, in the old Palace of the Dukes of Urbino at Gubbio. The doorways had been taken down ...shortly before, by a Florentine dealer, who had sold them to the duc de Chalunes, a french nobleman, who possesed a villa near Florence, where he proposed to re-erect them. The Duke, however died shortly afterwards and the doorways, though paid for , had not been delivered. The Duke's executors thereupon abandoned the intention of re-erecting them...It now appear that only a short time ago Signor Riblet, in partnership with with Signor Tito Gagliardi ...finally succeeded in acquiring the doorways from the representatives of the Duc de Chaulnes, and Signor Tito Gagliardi immediately wrote to me"

The doorcase originally framed the major ingress to the salone - or great hall - of the Palazzo Ducale at Gubbio. It's companion doorcase 101-1886 directly coresponded to it on the other side of the same wall.It can be established that 101-1886 was the inner section of the doorway and it follows that the present doorway was the outer section.
The palce was built for Federigo de Montefeltro Duke of urbino between 1475-80. There is no general agreement as to the architect responsible for the palace, but he was almost certainly Francesco di Giorgio. (uciano Laurana and Baccio Pontelli have also been suggested, but whereas the first, a paradigm of refinement, is unlikely to have accepted the crudities of Gubbio, the second, a minor figure, is unlikely to have aspired to them.
The present doorcase was probably designed by Francesco di Giorgio : though depending on Laurana's known work at Urbino (for example Francesco virtualy repeats laurana's cornice from the Urbino Dala delle Veglie) it nevertheless differs from it in being rather broader handled and in its omition of the habitual basal returnswith which Laurana very properly informs his door jambs.
Though the doorway is skillfully carved, its most important aspect (in the era of Piero and Pacioli) was its proportions. Allowing for the restored bases of the jambs, the portal orifice is a double square which gives the object an harmonious appearance.

Francesco di Giorgio (1439–1501) a painter, sculptor, architect, and engineer, born in Siena. Initially trained with Vecchietta and becamed accompalished in all the arts. His early works include cassone paintings and religious works in the tradition of Sienese painting. Eventually he assimilated stylistic traditions from Florence, noticeable in the plastic modelling of the figures in his monumental Coronation of the Virgin (1472–4; Siena, Pin.). As fortifications engineer in the employ of Duke Federigo da Montefeltro from about 1475, he may also have been involved in the design of the ducal palace at Urbino. A number of sculptures, including the Deposition (1474–7; Venice, S. Maria del Carmine) and the stucco Discord (V&A), whose forceful and classical compositions contrast markedly with his painting style, probably date from his time in Urbino.

290-1886
Doorway
Grey sandstone (pietra serena)
Urbino; about 1475-80
The present cornice of the door is a plaster cast from the companion doorway displayed nearby (101-1886), the original cornice having been destroyed by damp before its removal from the palace. Like 101-1886, the doorway comes from the Palazzo Ducale at Gubbio, where it formed the outer section of the doorframe of the main entrance to the great hall. Above is a shield with the arms of Montefeltro divided by a pale charged with the banner of the Church, and five eagles. []

A terminus post quem for the execution of the present doorway can be established from the from the heraldic ornament on the companion doorway 101-1886. The letters FEDVX found on the frieze on 101-1886, could not have been used by Duke Federigo before 21 August , 1474. The arms are shown with the banner of the church in a pale of augmentation , thus referring to his appointment in 1474 as Gonfaloniere of the Church. It follows that the doorway can not have been designed before September 1474, and must have been carved prior to Federigo's death in September, 1482. 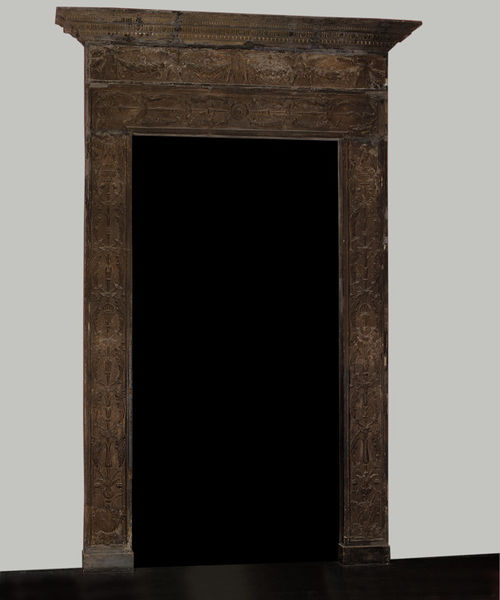