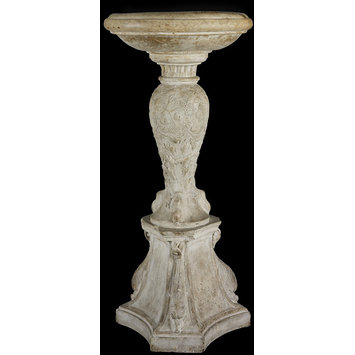 The holy water basin is made of marble which rests on a richly carved stem of Istrian stone. It probably would have originally been placed inside the front door of a Venetian church, as the carving style and the use of Istrian stone is typical of that city. The Latin inscription on the base, AQVA SALVTIS AETERNAE, (Water of Eternal Health) refers to the holy water contained within the basin which was used to bless members of the congregation.

The holy water basin is made of marble which rests on a stem of Istrian stone. The hexagonal-shaped base has three dolphins on its corners, while the stem is covered in grapevines and leaves, and acanthus leaves which end in three large animal toes.

The holy water basin was purchased in 1889 for 118 lire along with 12 other objects from Stefano Bardini in Florence. Bardini described it as a "baptismal font." (Registered papers, MA/1/B359). Upon arrival at the museum it was also described as "chipped, cracked and repaired."

Historical significance: Frida Schottmüller reproduced a closely similar holy water base in the Kaiser Friedrich Museum in Berlin (today the Bode Museum), which came from Adolph von Beckerath's collection. Though the basin was missing, the base was recognized as part of a holy water basin due to the grape leaf motif and inscription. The grape leaf and vine allude to the mixing of water and wine that takes place during the Mass and thus has Eurcharistic significance. The Berlin base is inscribed AQVA EXPIATIONIS QVOTIDIANAE, or "water of daily purification." (Schottmüller, taf. 50 and p.xvi).
The Roman capitals and the arrangement of letters are nearly identical in both the Berlin and the V&A bases. The baluster-shaped stem in each is covered with winding grapevines and leaves, and acanthus leaves which end in large single animal toes (probably a lion toe) at three points, which lead the eye down to the dolphins on each corner of the hexagonal-shaped base. The height of the base and stem (without the basin on the V&A work) of each measures 96 cm. The strong similarities between the two bases make it very likely that the holy water basins were made in the same workshop and might have served as a pair in a church. The different inscriptions, one referring to eternal salvation and the other to daily purification, might allude to different functions or users of each basin.
Schottmüller compared the Berlin holy water basin to the altar of San Zeno in the chapel of the same name in San Marco, Venice as reproduced in Paoletti’s 1897 survey of Venetian architecture and sculpture (Schottmüller, xvi). Paoletti attributed the chapel of San Zeno to Pietro and Antonio Lombardo. However the comparison is not valid, as the plasticity of the grapes, grape leaves and acanthus leaves found on the San Zeno altar is not matched by those on the Berlin or the V&A holy water basins.
The source of both holy water basins is probably Stefano Bardini's collection in Florence. It appears that Adolph von Beckerath also purchased items from Bardini as a letter from Bardini to Armstrong mentioned that a “Beckerath” purchased a terracotta on behalf of Wilhelm von Bode of the Berlin Museum (Letter from Bardini to Armstrong, 17 November 1890 in V&A Registered Papers, MA/1/B359). It is highly likely that Bardini owned both holy water basins and sold one to von Beckerath and the other to the South Kensington Museum. It is not clear if the basins were part of Bardini's private collection or if he purchased them with the intent to sell them.

Holy water fonts and basins have a long history in the Christian church. Most early Christian basilicas had atriums with fountains for cleansing at the entrance. Ritual cleansing practices which occur before entering the sacred spaces of the temple, church or mosque are still shared by the Jewish, Christian and Muslim religions. As church design in the West gradually dispensed with the atrium or forecourt, the fountains became replaced with freestanding basins or small fonts set into the interior wall near the door. Water that had been blessed was kept in the fonts and sprinkled on people as they entered the church.
The socle supporting the stem includes dolphins which were popular as a symbol of Christianity, derived from the fish symbolism used by early Christians. Fish were used as symbols for Christ due to the Greek word for fish (Icthys), an acrostic for Iesous Christos Theou Yios Soter (Jesus Christ, Son of God, Savior). Dolphins were believed to be a type of fish and were often found in Christian imagery as substitutes for fish or whales. They were particularly appropriate for baptismal or holy water fonts because of their associations with water.

2-1890
Holy Water Basin
Istrian stone (stem) and marble (bowl)
Venetian; early 16th century
The naturalistic foliage on the stem is similar to that on the Altar of San Zeno in St Mark's at Venice, which dates from the early 16th century. []