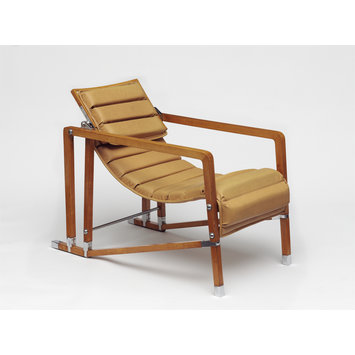 The Irish designer Gray had a glittering career behind her in Paris as an Art Deco designer when she began to take an interest in Modernism, around 1925. Her young Romanian friend Jean Badovici introduced her to the work of Le Corbusier and other Modernists and helped her with a number of architectural commissions, including the house they shared in Roquebrune (1925-9). The design of this house (named E.1027), was the work of Gray, with technical help from Badovici. It turned into a laboratory for a new kind of Modernism, not only in architecture, but even more so in design. Gray admired Le Corbusier, who gave her a set of his architectural drawings, but she also retained an acute and critical eye of her own. Her Modernist furniture designs, many of them created for E.1027, are a case in point. The so-called 'Transat' armchair was beautifully made of sycamore with metal fixtures, evoking the elegant craft of the ship's chandler. Several prototypes exist, but it was to be a long time before it was manufactured commercially. The principle was that of a suspended panel of leather-upholstered material, with a headpiece that could pivot to suit the posture of the sitter. Some versions use an upholstered sling of leather for the seat, like a deckchair, indicating that one of the sources of inspiration was the ocean-liner deckchair. Although Gray used chromed joints and connecting rods to allow for the use of straight sections of wood - simplifying manufacture and enabling the chair to be taken to pieces - the two side frames are expertly mortised in a way that could be industrially produced only with difficulty.

Armchair with open wooden frame formed from square section sycamore fitted with chromium-plated mounts, supporting a leather upholstery sling seat and an independent tilting headrest panel. The frame on each side consists of solid pieces of wood joined with mortise and tenon joints in an inverted u-shape. The ends of the legs and diagonal stretchers are flush-mounted with thin chrome-plated steel mounts. The frame has a 90° angle at the top back on each side and a wider angle at the front with a splayed front leg. The diagonal stretcher slopes back from the front leg and extends behind the frame. The back leg is attached to this by a mount that wraps around the frame and is screwed with eight screws to the leg. An extra back leg on each side - set forward of the main leg - is similarly attached at the base and angled inwards to sit within the arm. Each extra leg is rebated on the outer edge for the fitting of a chrome-plated jointing piece which extends behind the leg, where it is screwed into the inner face of the arm section, within a recessed box so that the fixing is hidden in normal use. The jointing piece also rises above the level of the arm in a swept, tapering rounded form, through the back of which a screw and bolt fixing attaches a second chrome plated mount, with a narrow plate which is screwed to the outer faces of the head-rest. The head-rest can pivot on the screw fixing. The head-rest is composed of an upper cross-piece tenoned between two inverted L-shaped sides; the front face of the U so formed is rebated to receive the imitation leather cushion with 2 horizontal bands of foam padding. The cushion is simply tacked to the front rebate of the frame. At the bottom of the extra legs the connection is by the same mount as with the main legs. A metal rod stretcher connects the two extra back legs at the bottom and is bolted through them. The upholstery is in imitation (plastic) leather, tan coloured, and covers seat and back in a single length unit with foam-filled horizontal sections of padding. This is attached at the head and under the leg to a chromed metal rod, bolted in the same manner as the back stretcher. Above the front rod stretcher is a second which forms the front edge of the chair and is padded with foam within an imitation leather sleeve, gathered at each end.

The transat chair was designed for the Villa E 1027 in Roquebrune on the Cote d'Azur. First drawings of the chair date back to 1924; it was patended in 1927. Eileen Gray was inspired to this design by the desk chairs used on the transatlantic passenger ships.

Around 1925, successful Art Deco designer Eileen Gray turned her attention to Modernism. The so-called 'Transat' chair shows her continuing interest in beautifully finished materials but the geometry of its design indicates her new direction. The chair's name (from 'transatlantique') and slung seat suggest the inspiration of ocean-liner deck chairs.

Jean Désert was the name of a gallery opened by Gray on the Rue du Faubourg-St Honoré, Paris, where she exhibited and sold her own work and occasionally that of other artists.

Gray used this type of chair for her house overlooking the Mediterranean. Its slung seat and reclining position evoke the idea of deck chairs on transatlantic liners.

Although the straight wood elements suggest simple, even mass manufacture, the frames are mortised in a way that requires expert handwork. The chrome plates draw attention to the joints while also covering them. 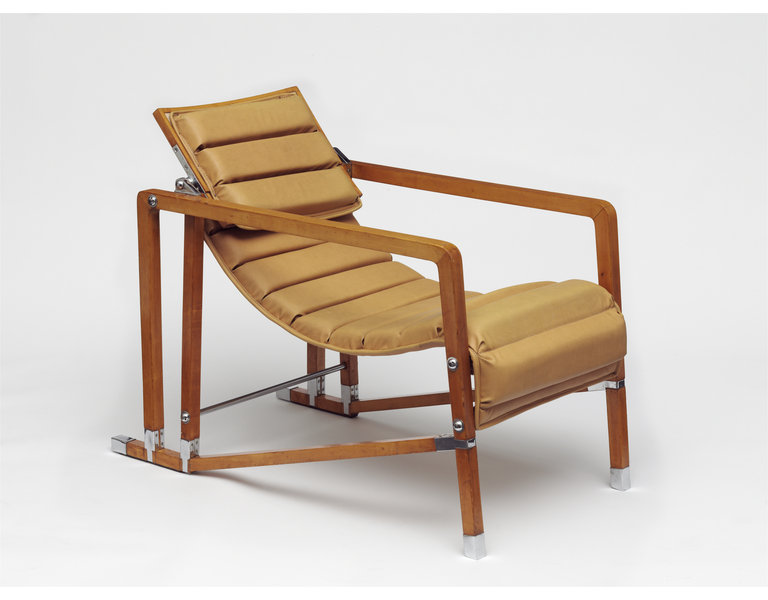