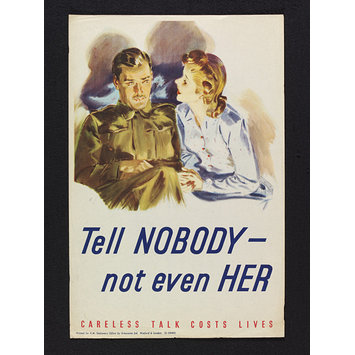 Tell Nobody - not even Her!

In the climate of total war, enemy espionage, spy networks and secret operations seemed a real and ever-present danger. In the public mind, this perception was developed and exploited by governments in their propaganda. Personal gossip and indiscretion presented a threat to national security; information being passed, deliberately or innocently to enemy agents had the potential to cause military and civilian casualties. The danger presented in war time propaganda was generally exaggerated, but as the risk existed, the public, and those in active service, could be made to feel that they were doing something positive for the war effort by keeping sensitive information about themselves or their jobs to themselves. Here, a young soldier, shy and uncertain of the situation in which he finds himself, seems in awe of a young woman - she might be his girlfriend or wife, or, of course, she may be a spy. Her character and morality are not important but the message of the poster is uncompromising: 'Tell nobody - not even Her'.

'Tell Nobody - not even Her!', Second World War propaganda poster depicting a glamorous woman seated with a serviceman. She is on the right of the image. The woman is young and attractive, and she has blonde, shoulder-length hair, in a style typical of the early 1940s. She wears a white blouse or dress, with red polka dots. She is pictured in profile, as she leans towards the serviceman, her hands clasped together. The serviceman is seen face on, his eyes turned towards her, he looks nervous. He has a moustache, and his hair is neatly combed. He sits with his legs crossed. He wears a khaki soldier’s uniform. Behind them, their shadows form the background, which has been 'roughly' applied in brown and buff colours.

Halfway down the poster, below the image, the slogan, 'Tell Nobody - not even Her' is printed in large black sans-serif letters. Below this, at the bottom of the poster, printed in capitalised, red, letters, is the message, 'Careless talk costs lives'. The artist has signed himself 'AY' or possibly 'AJ' under the image (just below the serviceman's arm), and the printing and publishing information, 'printed for H.M. Stationery office by Graycaine Ltd., Watford & London. 51-9980' is printed in small black letters in the lower left-hand corner of the sheet.

'Tell NOBODY - / not even HER!'
Halfway down the poster, below the image, printed in large black sans-serif letters.

'CARELESS TALK COSTS LIVES'
At the bottom of the poster, printed in capitalised red letters.

'AY' or 'AJ'
Artist's signiature, under the image (just below the serviceman's arm).

Poster depicting a glamorous female spy and a serviceman, produced by H.M. Stationery Office, about 1942 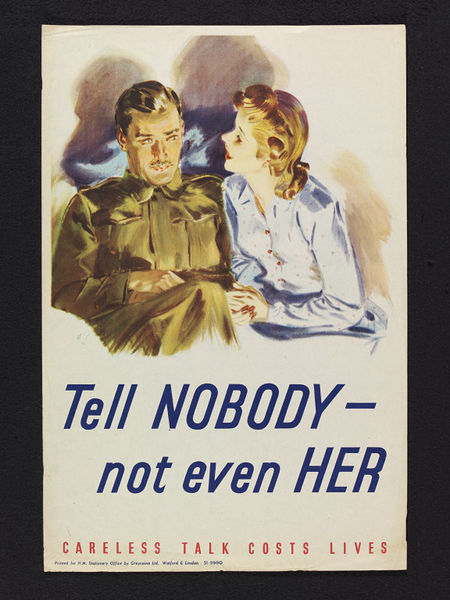