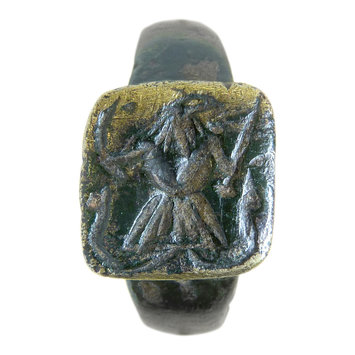 The strange serpent footed creature with the head of a fowl seen on the bezel of this ring is a representation of the figure of Abraxas, often associated with gnostic faiths. The modern term 'Gnostic' refers to a loose group of religions originating in the Middle East around Alexandria towards the beginning of the Christian era. Gnosticism was based on the duality between the imperfect material world and the perfection and light of the true, spiritual world. Although there were parallels between Christianity and gnostic faiths and some Gnostics may have considered themselves Christian, tensions with the organised Church led to accusations of heresy.

The figure of Abraxas is often said to have been revered by Egyptian gnostic sects who saw him as the head of a group of 365 spiritual beings. The name is found engraved on gemstones and on the bezel of rings and has also been found in Egyptian and Greek magical texts. Wearing a ring with the Abraxas figure may therefore have had a magical and amuletic purpose as well as a spiritual one. Some commentators have suggested that Abraxas was in fact an Egyptian solar deity and that the connection with gnosticism is false.

Bronze ring, the square bezel engraved with Anguipes, with the head of a bird, the arms of a man and the body and tail of a serpent

3rd century or 4th century (made)

From the Waterton Collection: Described by Waterton as 'Bronze signet ring; on the bezel is a human figure with a cock's head and the lower extremities ending in two tails. This is the usual type of the God Abraxas with the head of a cock or an eagle, for he was the solar genius'. The Dactyliotheca manuscript describes gnostic gems thus: 'Of the monstrosity of the Gnostic doctrine, it is unnecessary here to speak. It is sufficient to quote a passage from Tertullian which explains the word Abraxas. 'Then appears the heretic Basilides saying that the Supreme God was Abraxas, the creator of the Mind, which the Greeks call vous; from the Mind came forth the Word; from the Word, Providence, Virtue and Wisdom; - from those, the Principalities, Powers, Angels and from these again, an infinite number of Angels by whom he pretends 365 Heavens were made. In the number of these Angels who created the world, he ranks the God of the Jews the last, that is the God of the Law and the Prophets, who he says is no God but only an Angel'." (Dactyliotheca, p. 333)

'Abraxas' gems (engraved with the figure of Anguipes or the inscription Abraxas) continued to be worn in the middle ages. The tomb of a twelfth century bishop in Chichester cathedral contained a bloodstone intaglio carved with Anguipes and mounted in a ring, either a re-used antique stone or a medieval copy.

Bronze ring, the square bezel engraved with frontal view of a cock-headed Anguipes in armour, right hand holding a shield seen from the side, left hand holding a sword (?). Eastern Mediterranean, 3rd or 4th century 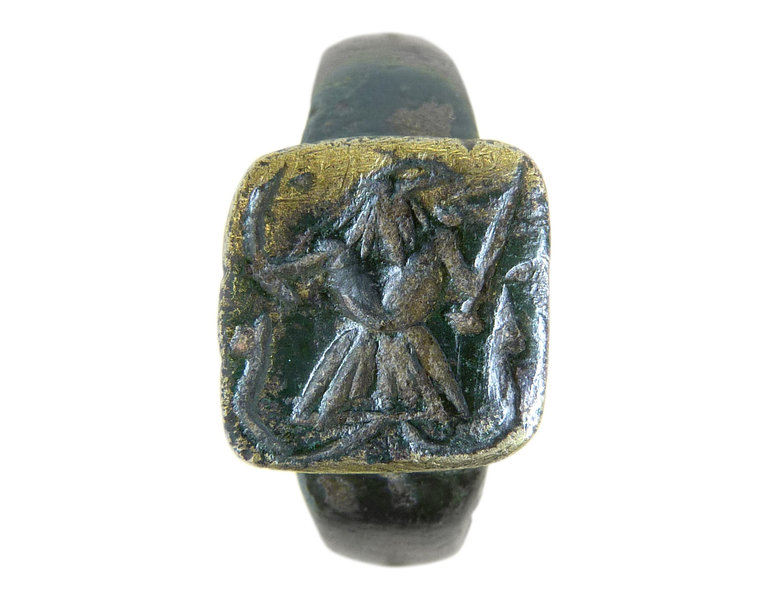