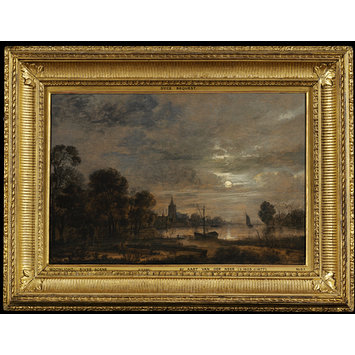 Aert van der Neer (1603/04-1677) spent his youth in Arkel near Gorinchem (Gorkum), a town on the river Waal, east of Dordrecht. He moved to Amsterdam in about 1632 and remained there for the rest of his life. He was best known for moonlight landscapes and winter scenes.

This painting is unlikely an authentic work by Aert van der Neer but a good example of his much copied oeuvre and the attribution to the artist is qualified in the catalogue raisonné (Schulz, 2002) as questionable. The demand for moonlit landscapes by Aert van der Neer was great during his lifetime but also in the 18th and the 19th centuries particularly in 1770-80 and again in the period between 1815 and 1840 in central Europe and England under the influence of Romanticism that led to a series of copies and forgeries often inscribed with fake monograms. The naturalistic elements such as the foliage and the vegetation at ground level look indeed less accurate than in an authentic work by the artist. The earthy palette and the play of reddish brown and dark greyish blue however reflect well the characteristic style of Aert van der Neer who was famous for his use of coloured light and his ability to depict atmospheric effects.

Extensive river landscape under a moonlit sky with a boat at shore in the foreground and a sailing boat with a distant city in the background, a church at mid distance.

AVN
inscribed with monogram in foreground left of centre.

Bequeathed by Rev. Alexander Dyce, 1869
South Kensington Museum Art Handbooks. The Dyce and Forster Collections. With Engravings and Facsimiles. Published for the Committee of Council on Education by Chapman and Hall, Limited, 193, Piccadilly, London. 1880. Chapter I. Biographical Sketch of Mr. Dyce. pp.1-12, including 'Portrait of Mr. Dyce' illustrated opposite p.1.

Historical significance: This work is a typical example of Aert van der Neer's style albeit it does not reach his high quality. Although his paintings were most copied and imitated during his life, the demand for moonlit landscapes by van der Neer was so great particularly in 1770-80 and between 1815-40 that a series of copies and forgeries exist, often inscribed with monograms. 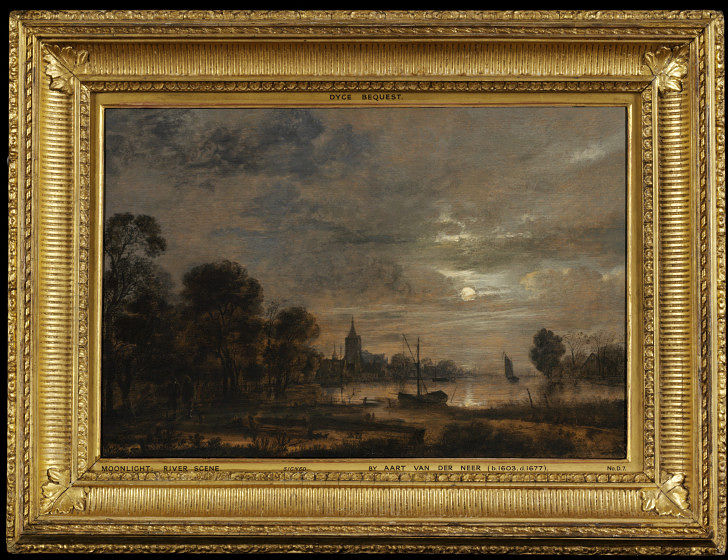