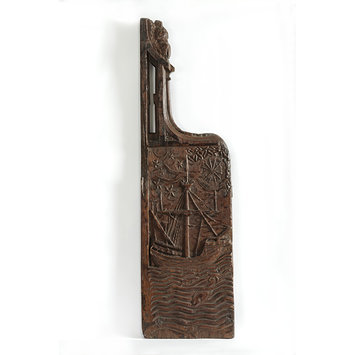 The stalls or benches in medieval churches were often decorated on the end panels, which were most visible. This fragment of a stall-end, on the left of the illustration, depicts a two-masted ship moored or at anchor in deep water. The ship is typical of an early fifteenth-century vessel used for fighting and trading purposes. Stall-ends depicting ships are relatively rare but this is one of two in the V&A's collection from St Nicholas Chapel, Kings Lynn. Both are illustrated here. The subject would have been particularly relevant to the Kings Lynn, given its coastal location.

This fragment was one of many sold by the church wardens of St Nicholas in 1852 to the Royal Architectural Museum. The Architectural Association presented it to the V&A in 1916. It is one of 26 fragments of stall/bench-ends and six misericords from St Nicholas in the V&A collection.

Portion of a stall-end, carved in low relief. At the bottom of the panel are a series of wavy lines representing water, amongst the waves are two fish and a crab. A two-masted ship is moored/at anchor on the water. It is square-rigged on the main mast and lateen-rigged on the mizen; the bowsprit is indistinct, the wood at this point having probably been mutilated. The sails are furled and there are pennons on the end of the main yard, on the top of the main mast, and on the bowsprit. The forecastle, fighting tops, and after castle are clearly shown, and on the latter can be seen the shields of the knights. Other details indicated are the main stay, shrouds and ratlines, lifts, sheets, gaskets, bowlines, rudder and a sheaf of darts in the main fighting top. On the right-hand side of the sky above the ship a sun with spoke-like rays is pictured beneath convoluted wavy lines, perhaps representing clouds. On the left-hand side are six stars beneath a crescent moon. The upper part of the panel is incurved and pierced with tracery. This is surmounted by the figure of an angel who sits resting against the pinnacle of the stall-end.

This description is largely taken from English Medieval Furniture and Woodwork by Charles Tracy (Victoria and Albert Museum, London, 1988), p.96

The representation of the ship has been judged technically genuine (2008, correspondence with staff at the NMM,Greenwich), to the extent that ‘no 19th century faker could have made either the detail of the stylization of the depiction so utterly convincing’.

By comparison with 15th century woodwork that survives in the chapel of St Nicholas, (and St Margaret’s) Kings Lynn, the form and iconography of the two ship bench ends (W.6-1916 and W.16-1921) are unusual, but this may not be significant as only a fraction of the 1419 woodwork survives, almost certainly not in its original configuration. We do not know the ensembles of which they formed parts. In their carving and condition they are in keeping with the other surviving woodwork (in the Museum and still in the church), and the distinctive curly cloud motif above the ship on W.16-1921 is also found running below the crescent moon with Virgin on one of the stall ends that survives in the chancel, and which Charles Tracy (in correspondence says was commonly used in the middle ages in all media). The pierced ‘mast’ of W.16-1921 bears comparison with the semi-detached column on W.9-1916, and the squarish rounded shoulder at the front conforms to others from St Nicholas (eg W.5, 7, 8 -1916). As the vertical edges of the bench end show some signs of having been tidied up, it is possible that a narrow plain border (at least on the leading edge) has been cut back, leaving the design ‘bleeding’ to the edge, but it does not seem possible that an animal was originally perched on the shoulder, as W.8-1916. The front and back of W.16-1921 are of essentially the same thickness, with similar (though slightly irregular) concave mouldings. The reverse shows worm damage, especially along the bottom and inside edge (where it was built-in), and bruising along the seat mortice (crudely filled with a later batten) entirely consistent with the age and use of the piece.

Historical significance: Stall-ends depicting ships are relatively rare but this is one of two in the V&A's collection from St Nicholas, Kings Lynn, with such a subject (the other, W.6-1916, depicts a single-masted ship). Other examples can be found on the early sixteenth century bench-ends at Bishops Lydeard, Somerset, St Winnow Cornwall and Budleigh, Devon.

As is the case with Budleigh, the depiction of ships is particularly relevant to the coastal location of Kings Lynn. The two-masted ship depicted is typical of an early fifteenth century vessel used for fighting and trading purposes and would have been particularly resonant to the local community who raised funds for the re-building of the chapel in the early fifteenth century. A St Nicholas choir-stall finial features the arms of the town of Kings Lynn. Both this and the two bench-ends depicting ships show the way in which decoration of specific relevance/interest to the community was included in the woodwork scheme.

The term ‘Stall’ or ‘Bench End’ literally refers to the wooden element which constitutes the end of a stall or bench used for sitting on, in this context located within a church. Like early communities of monks, medieval congregations in parish churches were obliged to stand for the duration of the Mass. Unlike the monks, who stood in the choir of the church, the lay congregation stood in the nave. The nave was used for secular as well as religious purposes, preventing any large-scale permanent seating arrangements until these secular activities were moved outside the church or to a separately constructed church building.

It is thought that the benches at Dunsfold in Surrey are the earliest surviving examples in Britain. These date from the early fourteenth century but wooden benches did not appear in churches in any significant number until the latter half of the fifteenth century. It is not entirely clear why they started to appear in such numbers at this time, as it does not coincide with any significant change in ritual practice. However, despite the sermon not being universally adopted in church services until the seventeenth century there was a general tendency in the later middle ages for friars to preach sermons and this may have encouraged the introduction of church seating. It was also a time of increased prosperity in parish communities and funds were often put to use re-building local churches on a grand scale. Improving comfort on the inside of the building by introducing seating may have been part of the new brief.

Stall/bench ends can be divided loosely into two styles which correspond with the two geographical areas where the majority of medieval stall/bench ends survive: East Anglian and the West Country. East Anglian stall/bench ends generally date from the late fifteenth century onwards. Most have a finial, or poppy-head, at the top and a moulded arm rest, often with a figure carved on top. The face of the bench end can either have relief carving or be left plain. West Country stall/bench ends usually date from the sixteenth century onwards and are square-headed. They are usually decorated with relief carving on the face of the bench end but sometimes, as at Madron in Cornwall, the subject matter was carved on the top.

While stalls/benches often had carved backs and fronts, the ends received the most attention because it was these elements that were most conspicuous. They were normally made from a single piece of oak which could be up to 127mm thick.

St Nicholas, Kings Lynn is England’s largest chapel of ease, a chapel dependent on a church (St Margaret’s and the priory attached, dissolved under Henry VIII) and serving part of the parish for the convenience of parishioners nearby, staffed by a chaplain. It only obtained the right to administer the sacraments of baptism and marriage in 1627. It was built c1200, (possibly replacing a temporary timber structure), rebuilt c1400-1419. It stands to the north of the town, and the spire was an important sea-mark for approaching ships. It is a huge building, lit by great windows at two levels. There was a rood screen (still standing in 1738) and various local guilds had chapels inside the church. Until the 16th century the church was rich in stained glass, plate and vestments. In 1851-3 wholescale ‘restoration’ stripped out almost all the medieval woodwork in the chancel and nave, though two stalls were retained as pulpit and reading desk and several benches

Portion of a stall-end depicting a two-masted ship on water with stars, crescent moon and the sun above; St Nicholas Chapel, Kings Lynn; ca. 1419

Portion of a bench end, carved in low relief. A two-masted vessel of the 15th century, used for ﬁghting and trading purposes, is represented moored or at anchor. It is square-rigged on the main mast and lateen-rigged on the mizen; the bowsprit is indistinct, the wood at this point having probably been mutilated. The sails are furled and there are pennons on the ends of the main yard, on the top of the main mast, and on the bowsprit. The forecastle, ﬁghting tops, and after castle are clearly shown, and on the latter can be seen the shields of the knights. Other details indicated are the main stay, shrouds and ratlines, lifts, sheets, gaskets, bowlines, rudder, and a sheave of darts in the main ﬁghting top. In the sky the sun is shining from beneath the clouds; on the opposite side are six stars and a crescent moon; below in the sea are ﬁshes and a crab. The upper part of the panel, which is incurved, is pierced with tracery and surmounted by a ﬁgure of an angel (PL. 55).
Oak. About 1419
Purchased
95 X 28 cm Mus. No. W.16-1921 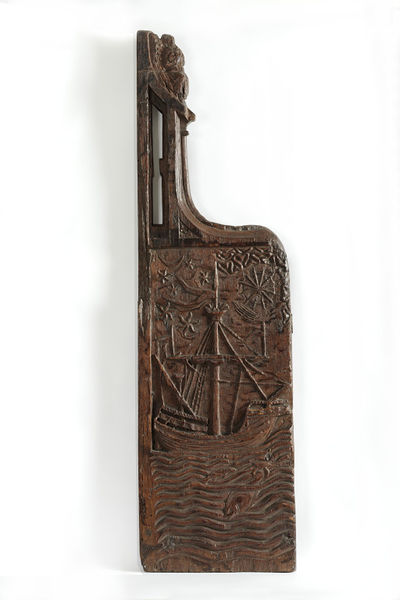