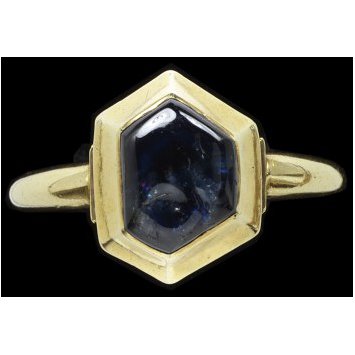 The hexagonal shape of the bezel on this ring was made to fit a large polished sapphire. Gemstones were highly valued in the medieval world, sapphires, rubies, garnets, amethysts and rock crystal being the most commonly used. Diamonds were highly valued but much less common. They were prized, as now, for their colour and lustre but also for their perceived amuletic or talismanic powers. Books known as 'lapidaries' listed the powers attributed to each stone. The Liber Lapidum of Marbodus of Rennes (1067-81) was one of the most widely read and claimed that sapphires could protect the body, cool fevers and headaches, calm the eyes and cure stammers.

Gold ring, the hexagonal bezel is set with an uncut sapphire.

Gold set with a cabochon sapphire

Gold ring, the hexagonal bezel is set with a cabochon sapphire, Western Europe, 1300-1400. 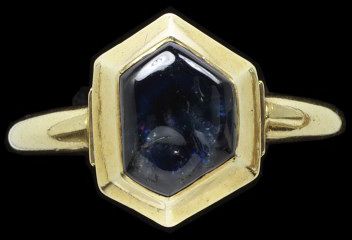