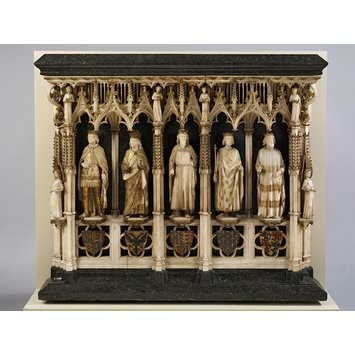 This model for the proposed restoration of the monument to Queen Philippa of Hainault is designed by Sir George Gilbert Scott in ca. 1850-1, with the statuettes made by John Birnie Philip, the marble background and alabaster niches by Samuel Cundy and the painting and gilding work executed by Thomas Willement.

The question of the restoration of the royal tombs was much debated in the 1840s and 1850s. Both national pride and the growing interest in the authentic reproduction of medieval art made the battered state of the Westminster monuments appear intolerable. Shortly after his appointment as Surveyor, Scott undertook a scholarly reconstruction of the tomb of Philippa of Hainault (died 1369) which was translated into this full scale model by the skills of Samuel Cundy, the Abbey Mason and John Birnie Philip, one of the finest and most prolific contemporary sculptors.
Although this model was shown at the Great Exhibition of 1851 and three years later Parliament voted £4,500 towards the restoration of the royal tombs, nothing structural was done. Instead from 1857 onwards, Scott treated the tombs with a particular concoction of shellac which reintegrated their flaking stonework.
While Scott's design gives an accurate impression of the intricate detail and the colouring of the monument as originally conceived, it remains a High Victorian evocation of the Middle Ages. The model was exhibited at the Great Exhibition in 1851 and at the Architectural Exhibition in 1852.

Scott (1811-1878) was an architect. He was educated at home and with his uncle. Then he became a pupil of Sir Robert Smirke and afterwards practised both independently and also in partnership with W.B. Moffat. He was much concerned with the Gothic revival. As such he was responsible for the building or restauration of many churches, cathedrals, chapels and public buildings, like workhouses and schools. He also designed for example the Albert Memorial in Hyde Park, the Glasgow University building and St. Pancras Station.

A series of five canopied niches applied to a grey marble background. Occupying the niches from left to right, are alabaster statuettes (all with gilt metal crowns) representing Edward the Black Prince, Queen Philippa of Hainault, Edward III, King John of France and William Count of Holland and Hainault. Each figure stands on a foliated corbel, below which is a pierced quatrefoil on which is applied the relevant coat of arms. On either side of the centre canopy and at the top left and right corners are winged angels with gilt metal crowns. On the left ad right returns are winged angels supporting scrolls.

Painted and gilded alabaster and marble 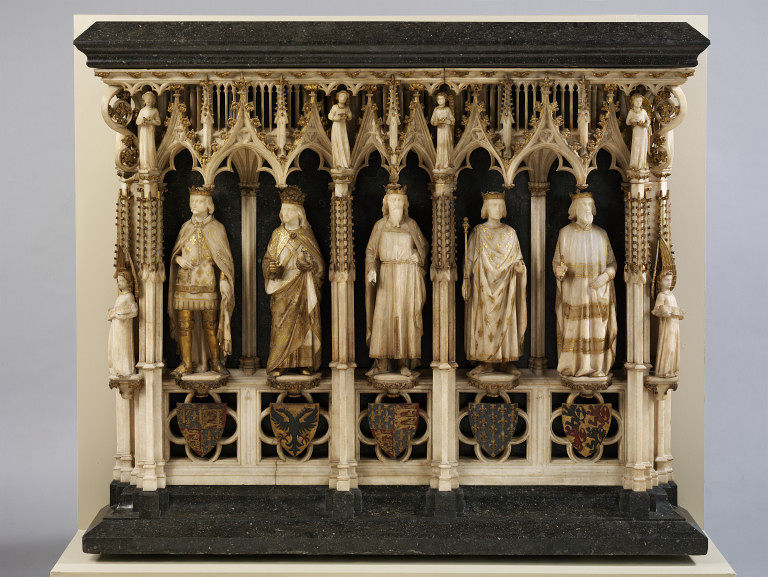