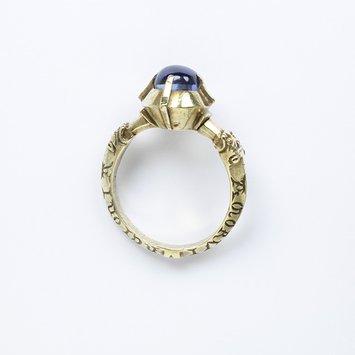 On medieval jewellery, love and affection were frequently expressed in inscriptions. Rings so inscribed are known as 'posy' rings (from 'poesy', or poetry). Such inscriptions can be in Latin or in French, both languages fairly widely understood or spoken by the elite in Western Europe. Love inscriptions often repeat each other, which suggests that goldsmiths used stock phrases. Perhaps the most commonly found inscription is 'Amor Vincit Omnia', a motto found on a brooch worn by the flirtatious Prioress in Chaucer's Prologue to the 'Canterbury Tales', written around 1390.

'Ave Maria gracia plena' (Hail Mary, full of grace), the salutation used by the angel Gabriel to the Virgin Mary when announcing that she would bear the baby Jesus, is also commonly found on rings, purse-mounts and other small, personal items and may have had a magical or protective intention.

This ring is part of a large group of jewels given by the art historian and collector Dame Joan Evans (1893-1977). Dame Joan came from a family of distinguished archaeologists and scholars. Her interest in art and jewellery was formed at the knee of her father Sir John Evans and she wrote her first book 'A History of Jewellery' at the age of 17. She was one of the first women to take a full degree at Oxford which she followed with a distinguished career as an author and academic researcher. In 1933 she became a Fellow of the Society of Antiquities and later a director. She had a long association with the V&A, making numerous lifetime gifts of jewellery and bequeathing her collection at her death in 1977. 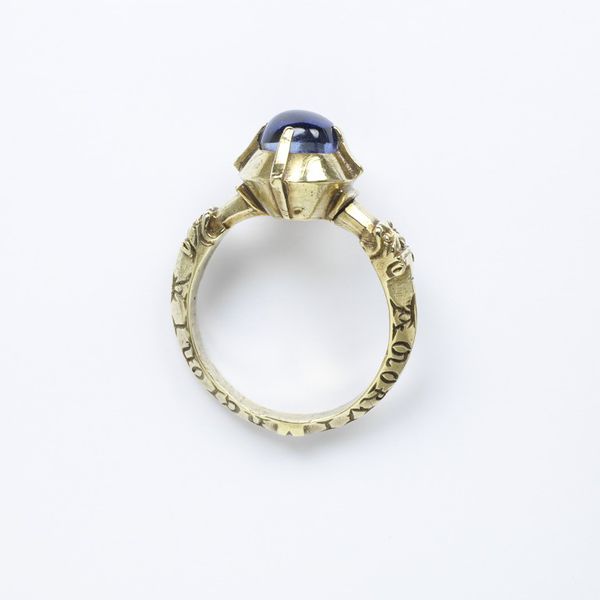