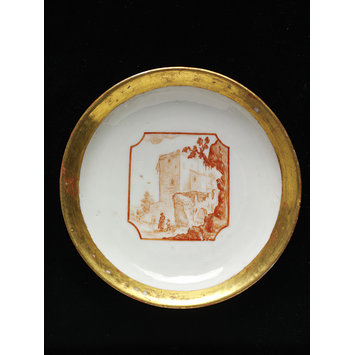 This beaker and saucer was made in the early years of production at Carlo Ginori's Doccia porcelain factory in Florence, Italy. Ginori was an important statesman and entrepreneur who, above all for reasons of prestige, wanted to re-establish porcelain manufacture in Italy, as none had been made there since the closure of the Vezzi factory in 1727. On the death of the last Medici Grand Duke of Tuscany in 1737, Ginori, a Senator of the Florentine State, went to pay homage to the new ruler of Tuscany, Francis Stephan of Lorraine, husband of the Empress Maria Theresa of Austria. While in Vienna he visited the porcelain factory of Claudius Innocentius Du Paquier and persuaded the painter, Karl Wendelin Anreiter and the kiln technician Giorgio delle Torri, to follow him back to Florence and work at his new factory.

This beaker and saucer is part of a documented service (probably intended for chocolate), made in 1742 with the arms of the Marchese Francesco Brignole of Genoa. The saucers have landscape panels painted in iron-red and are typical of Anreiter's work.

Tall beaker and saucer of hard-paste porcelain, painted by Carl Wendelin Anreiter von Ziernfeld with a landscape and the arms of the Brignole family of Genoa, made by the Doccia porcelain factory in Florence, Italy, 1742.

Kräftner, Johann,ed. Baroque Luxury Porcelain: The Manufacturers of Du Paquier in Vienna and of Carlo Ginori in Florence , with text by Claudia Lehner-Jobst, Andreina d'Agliano and others, catalogue of the exhibition held at the Liechtenstein Museum in Vienna, Prestel, 2005, p.335, no. 178
1. Cup and saucer
1742
CarlWendelin Anreiter von Ziernfeld (painter)
hard-paste porcelain painted in colours and gold
cup h 7,3 cm; saucer diam. 13 cm
under the cup a “V” in underglaze blue
inv. C.12&A-1941
gift: H.E. Backer
This cup is entirely gilded on the inside and on the foot and has a coat-of-arms painted in colours on the outside. The back side of the cup as well as the saucer with its gilded edge, have a landscape scene painted in red surrounded by a hexagonal red frame. The presence of ferrous impurities in the clay, the bubbles in the very glassy glaze and the use of red under the gilding, suggest that the set was made in the earliest years of the factory. The cup and saucer, in fact, belong to the set made in 1742 for Marquis Gian Francesco Brignole Sale of Genoa, as demonstrated by a letter sent to Ginori by the ambassador of the Republic of Genoa (for information on Gian Francesco Brignole Sale see BUONADONNA, MARCENARO 2007, p. 113; also, A. d’Agliano, in BAROQUELUXURY PORCELAIN 2005, p. 334-335, cat. 176-178 and relative bibliography).
The quality of the decorations and the gilding on the inside suggest that the cups in this set were painted by the chief painter at Doccia, Carl Wendelin Anreiter (1702-1747).Documents in the archives confirm that the gold, because of its high cost, was used only by the director of the “Pittoria” (the exclusive porcelain decorating section of the factory): “reimbursed to Antonio Corsi the cost of a golden booklet sent to Doccia to Carlo the painter so that he can gild the porcelain” (AGL, Libro Contabile, 1737- 1746, 1742, fol. 18;BIANCALANA 2009,p. 128).
The little iron-red landscape scenes inside the cartouches are very similar to the engravings by Aegidius Sadeler and Jan Vischer based on paintings by Jan Brueghel the Elder, Roeland Savery and Jan van de Velde: research conducted on the iconographical sources used by Carl Anreiter has demonstrated that he used these sources for the decoration of his porcelain pieces (A.d’Agliano, in BAROQUE LUXURY PORCELAIN 2005, p. 78-80).
The blue letter which appears on this cup and others of the same service, as well as the coffee cup with the arms of the Electress Palatine, in the past has been identified as a signature of Anreiter (GINORI LISCI 1957, p. 17- 20). This attribution is generally accepted despite the fact that there is no confirmation of it other than the stylistic affinities with other objects that were signed by him (A. d’Agliano in BAROQUE LUXURY PORCELAIN 2005 p. 334, cat. 176; BIANCALANA 2009, p. 128- 129). There are other cups from the same service in the Lokar collection in Trieste (D’AGLIANO2013, p. 174-175, cat. 79) and the Gardiner Museum in Toronto (A. d’Agliano, in BAROQUE LUXURY PORCELAIN 2005, p. 335, cat. 177) and there was also one in the Leproni collection(MORAZZONI,LÉVY 1960, plate 168a).
A. d’A.
Bibliography: L. Ginori Lisci, in TWILIGHT OF THE MEDICI 1974, p. 426, cat. 252; LANE 1954, plate 46a; A. d’Agliano, in BAROQUE LUXURY PORCELAIN 2005, p. 335, cat. 178 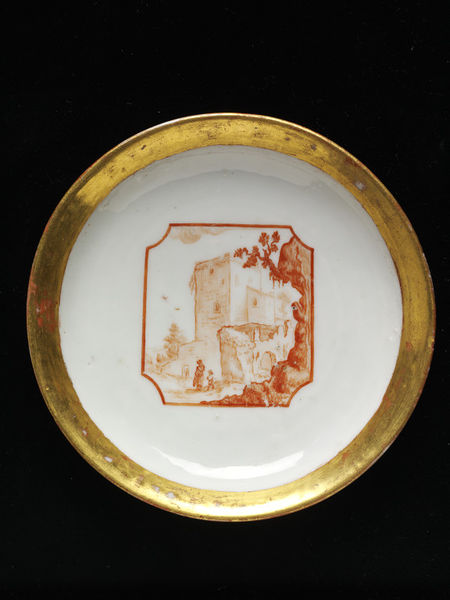