Last updated: 19 Oct 2020
Or are you looking for Search the Archives? 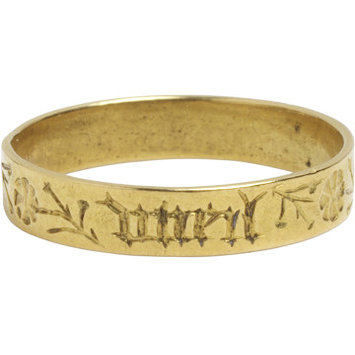 This ring is known as a posy ring, deriving from the French 'poesy' (poetry). Posy rings were plain hoops inscribed with mottoes or saying, that might express sentiments of faith, commemoration, friendship and love. It was an especially popular type of ring in the fifteenth century. The inscription on this ring, autre ne vueil (desire no other) would have been a stock phrase used by goldsmiths.

Gold ring, the outside of the hoop engraved with sprigs and inscribed in French Autre ne vueil.

'Autre ne vueil'
'Desire no other'
Inscribed around the hoop, in French.

Found at Bartlow in Essex

Jewellery was worn by men and women as a symbol of wealth and status. In the 14th and 15th centuries however, sumptuary laws were introduced to regulate and reduce the amount and type of jewellery worn by the public. In France in 1285 laws sought to forbid townspeople and their ladies from wearing precious stones, belts of gold and gold coronets. In 1363, English law attempted to limit the wearing of gold and silver to richer noblemen. There is little evidence to suggest that these laws were heeded, although the survival of base metal jewellery suggests that the less wealthy tried to find alternatives to silver and gold to display their status.

This gold ring was made in the 15th century after the introduction of sumptuary laws. It may have been owned by a very wealthy member of society, permitted to wear gold and gems, or by someone willing to disregard sumptuary laws. Gold jewellery was expensive, yet popular with all those who could afford it. It remained a strong symbol of status throughout the medieval period.

The ring's small size shows that it would have been worn originally by a woman or a child. However, rings were often exchanged as gifts or given in wills to friends and relatives. In the circumstance that the ring did not fit the new owner, they were worn around the neck, or sometimes secured to the finger with a ribbon around the wrist.

Historical significance: Posy rings were among the most common type of ring worn in the later Middle Ages and were especially popular in the fifteenth century. The inscription on this ring is one of the standard stock phrases used by goldsmiths of the period.

Posy rings (derived from the French poesy, poetry) were plain hooped rings inscribed with mottoes or sayings that expressed sentiments of faith, commemoration, magic, friendship and love. Posies with amorous messages were worn both as wedding rings and given as love tokens. They were often inscribed with stock phrases such as autre ne vueil; rings expressing more personal messages are not as common. The words of the inscription were often divided by symbols of sentimental significance such as pansies, roses, and pinks.