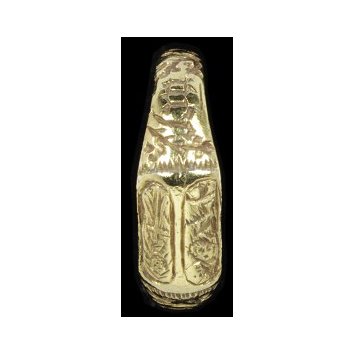 Silver or gold rings engraved with figures of saints have become known as 'iconographic' rings. They seem to have been a particularly British type and sometimes combine religious imagery with romantic posies. They feature the most venerated saints of the middle ages: Sts Christopher, Catherine, Margaret, Barbara, John the Baptist and George. The choice of saint was probably dictated by local loyalties, membership of confraternities devoted to a particular saint or the desire to invoke that saint's help with a particular matter. Saints in pre-Reformation British belief played an important role as helpers and intercessors - wearing a ring engraved with an image of a favoured saint was a way of maintaining a direct and personal relationship with them.

Gold ring depicting St. Christopher and St. Paul, with the shoulders inscribed in black letter with an illegible inscription and with engraved sprigs, England, 1400-1500.