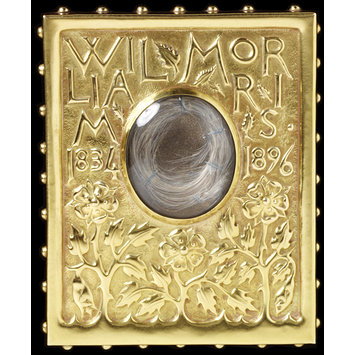 Gold plates on a wooden carcass with a locket fitting at the back for Morris's hair.

London (made)
England (made)

For folk unborn this shrine doth hold Thy silvered lock, Oh! heart of gold Should time's hand mar it, yet thy mind Shall live, in deathless words enshrined.
Plaque on the back inscribed with a verse by F.S. Ellis. Hallmarks for 1896-1897.

There are two similar cases containing William Morrris's hair. One of the cases is in silver and has no hallmarks. It was donated in 1963 to Kelmscott Manor, a house in the Cotswolds which belonged to William Morris, by Virginia Surtees who had been given it by Sydney Cockerell, private secretary to William Morris and later Director of the Fitzwilliam Museum, Cambridge. A photograph of the silver case has the caption 'Silver. designed and executed by me R.C.S', Robert Catterson Smith. Catterson Smith was an artist, illustrator, and silversmith. From 1901-3 he was headmaster of the Vittoria Street Branch School, Birmingham, and from 1903-20, head of the Central School of Art, Birmingham.

It is reasonable to suggest that Catterson Smith also chased the gold version of the case in the V&A, which has similar but not identical lettering and decoration. It was bequeathed to the V&A by May Morris, younger daughter of William and Jane Morris. It bears London hallmarks for 1896-7.

The last letter of the sponsor's mark is partly concealed. The mark is not precisely like any of those published in John Culme, Directory of Gold and Silvermarks...1838-1914, Woodbridge, 2 vols., 1987. The most likely candidates whose marks are listed by Culme are:

Charles James Fox, a smallworker who registered a number of marks between 1884 and 1910.

Charles John Hall Marlow, described as a casemaker in 1896, and described elsewhere as a watch and watchcase maker in Coventry.

Charles Jabez Padgett, goldworker, who registered a mark in 1873. He was described as a black ornament maker (i.e. jet and other kinds of black jewellery) and registered a design for a buckle or a clasp in 1873, but is not mentioned by Culme later than 1878.

Charles John Plucknett, goldworker, registered a mark in 1889. The firm seems to have specialised in tools and materials, and, at one point, chain making.

Christian John Reid registered a mark in 1885 as a plate worker when the Newcastle assay office (the long-established firm was based in Newcastle) closed. He died in 1891, but the mark may have been used until other marks were registered for the firm in 1901.

Given that none of these has a mark precisely the same as that on the case, certainty is impossible, but the most probable maker appears to be Charles James Fox whose work on small articles of silver is well known, for example on items for toilet services.

Engraved with a verse by Morris's friend and publisher F.S. Ellis. 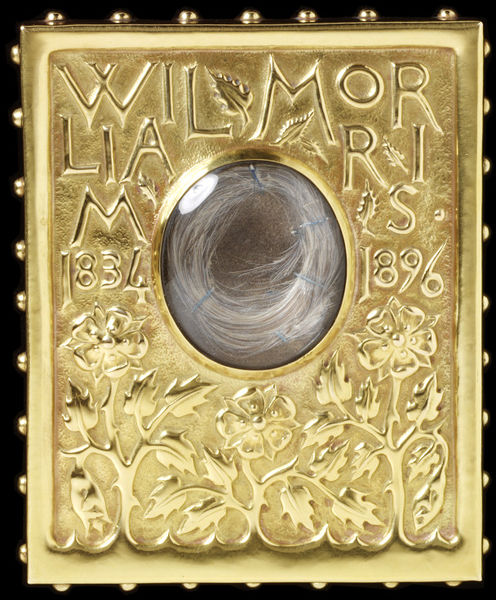