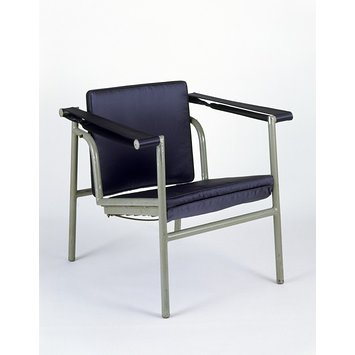 In his lecture 'The Furniture Adventure', delivered in Buenos Aires in October 1929, the architect Le Corbusier explained the thinking behind the three tubular-steel chairs that he had already designed in collaboration with Pierre Jeanneret and Charlotte Perriand: people are comfortable sitting in a range of different ways to match their actions - talking, reading, eating, writing - and chairs should be flexible accordingly. Of the three chairs, the chaise longue was designed for total, lounging comfort, like the Wild West cowboy with his feet on the table. The 'grand confort' club chair was a variant of the luxurious English club armchair, big enough to move about in and find comfortable positions while reading a book, talking or listening to music. This 'fauteuil à dossier basculant' was a working chair, based on the traditional wooden 'colonial chair', with its leather strap arms.

Perriand had had the three chairs made up by her workmen some time in the winter of 1928-9 and prototypes were made for two houses designed by Le Corbusier's architectural office: for Raoul La Roche, and for Henry and Barbara Church. Different textiles were used in these chairs. The most common textile used for the 'fauteuil à dossier basculant' was blue satin. Five of those delivered to Henry Church for the villa designed by Le Corbusier were covered in blue satin and three in brown satin, while another was covered in parchment. This chair appears to have been one of those nine chairs, though its grey paint is almost certainly not original. These early prototypes were made by a number of manufacturers, including the firms of Duflon, Hour & Le Gac (Duflon was one of Le Corbusier's trusted metalworkers) and Labadie. When the chairs went into manufacture by the German firm Thonet in 1930, they were more usually finished in leather or calf-hide.

Armchair with grey painted tubular steel legs and frame, and blue replacement upholstery on the seat and tilting back. The arms are formed from strips of the same blue fabric slung between fittings at the top of the front and rear and legs.

France (designed and made)

This chair is thought to be one of those originally designed by Charlotte Perriand for the Villa Church. In 2004 the upholstery on the chair was investigated in preparation for the Modernismexhibition in 2006. Reseach into the history of the upholstery, including notes published in Charlotte Perriand Livre du Bord 1928-1933, edited by Arthur Ruegg, Basel 2004, indicate that square cushions covered in dark blue satin, with arm rests formed of satin bands held with d-shaped rings, were used for five of the chairs for the Villa Church. The same scheme was recreated for the Museum's chair, using satin from Macculloch and Wallis Ltd, 25 Dering Street, London W.1.

Swing-back armchair of tubular steel, with upholstery of silk satin over a spring

In 1929 Le Corbusier and his colleagues designed a small group of chairs suitable for the different activities of the day: talking, reading, eating, writing and, in this case, working. Though made of tubular steel, it was based on a traditional wooden 'colonial' chair with leather strap arms. The blue upholstery reproduces the original made for the Villa Church.

The inspiration for this design was the canvas and wood 'Indian Chair', sometimes referred to as a 'Campaign' chair, manufactured by Maple & Co. of London and others from the mid-nineteenth century. Corbusier and his colleagues used Maple furniture in more than one commission but with the advent of tubular steel furniture,decided to design their own version of the British chair (although this radically modern version did not fold).

This version made for the Villa Church. (maker unknown). Later versions made by Thonet. 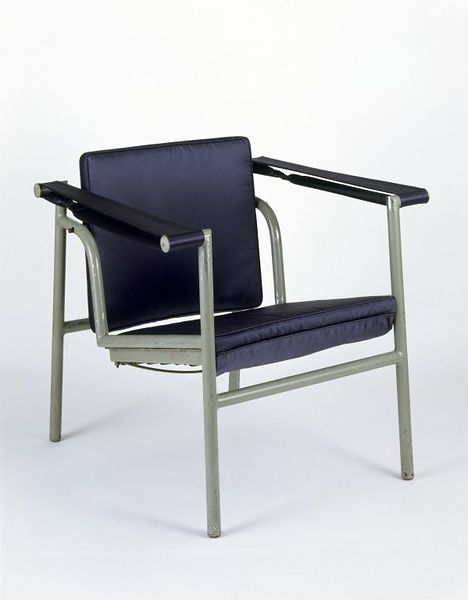