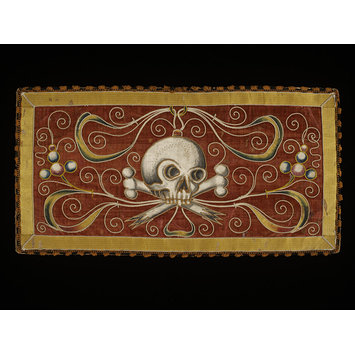 This panel belonged to a set of ecclesiastical ornaments used during Christian ceremonies. In the language of the Church, the colours and the imagery of this object were appropriate for funeral services. The skull and crossbones, a well-established symbol, dramatically reminded the congregation of the transitory nature of life. They appeared on grave stones, monuments and paintings as well as in textiles.

During the Counter-Reformation from the second half of the 16th century, the Catholic Church encouraged the revitalisation of the arts and in particular their role in arousing intense emotion. Different media were used publicly to produce awe and fervour among the faithful during church services, including funerals.

Rigid apparel of embroidered brownish red silk velvet bordered with a band of yellow silk satin (1 inch in width), and edged with a narrow black and brown silk braid. The red velvet bears a strong image created through the application of silk satin and couched cord: a skull and cross-bones dominates the centre of the panel and is surrounded by decorative scrollwork. The applique white satin is tinted or painted in black and grey on the skull and elsewhere in blue and red. The applique of yellow satin in blue (which creates areas of green). The applique satin is outlined in a couched yellow and white cord, and certain elements of the design are emphasised by the use of a similar couched outline, such as the teeth on the skull. In the centre of the skull there are needle or pin holes that suggest it may have been stitched to something at one point (they form a zig zag shape). Drips of, possibly, candle wax have dried on the surface of the panel.

The panel is backed with coarse undyed, probably, linen in a plain weave, and possibly glued to the silk (to go by the rigidity of the piece) although a few stray thread ends on the back suggest that some of the stitching was executed after the linen was put in place.

This panel and four others of the same materials and with the same imagery were given to the Department of Textiles by Madame Tussaud's Limited, Marylebone Road, NW1 on 14th September 1967. The curator's intention was 'to keep them available for loan to any provincial museums which might want to exhibit this type of material.' (King to Chapman, 14.09.1967) They were in better condition than anything comparable in the collection at the time. Lady Chapman in the Archives and Records section at Madame Tussaud's was happy to have found a home for them as 'They are really rather nasty and I could not see any possibility of ever finding a use for them, yet at the same time they were interesting, and it would have been a great pity if they had ever been thrown out as mere junk.'(Chapman to King, 19.09.1967)

The panels had come to light in 1965 due to rebuilding operations, during which Madame Tussaud's had been making 'copious inventories of "relics" in the wardrobe and elsewhere'. Other finds included Chinese robes, an Arab woven scarf and some 18th and 19th century women's dress (Chapman to Wingfield Digby, 12.09.1965). Madame Tussaud's sent these items to the Department for the purposes of identification. Donald King identified the panels thus: 'The embroideries which you sent into the Museum for an opinion are the apparels of a dalmatic. They are Spanish work of the early 17th century and were most probably intended for use at Requiem Masses.'(King to Chapman, 17.08.1965) In the light of this identification, the company believed that they had probably been purchased a number of years previously 'when the late Mr John Tussaud was considering making a tableau of the Spanish Inquisition', an idea that was abandoned (Chapman to King, 25.08.1965). (RP 65/2003)

Historical significance: This panel is significant as an example of the impact of the Council of Trent (1545-63) on the design of church ornaments. While the Council's impact on sculpture and painting is well covered in existing literature on the plastic arts, its interpretation in textiles has largely remained hidden within specialist textile histories. This divorce of textiles from the larger picture is unfortunate as priestly appearance was part of the ceremonial around those other more durable objects, and part of the experience of the faithful.

It seems likely that panels from dalmatics may have survived intact longer than other parts of the dalmatic which may have become damaged during church services or been recycled at a later date. Similarly, the wear and tear on chalice covers was probably less severe than on other church textiles. The dried wax on the surface of the panel is an important component of its history, probably revealing the panel's use in the vicinity of candles, a crucial component of church services, and a serious danger to the well-being of the any materials with which they came into contact.

Attribution of date and place based on strength of Counter-Reformation in Spain and similarity with surviving examples in Segovia Cathedral and Murcia. Original attribution by Donald King in 1967 when he identified the object for Madame Tussaud's - he gave no justification for his attribution.

Attribution note: Vestments tend to be made to commission, even if their motifs are often taken from a standard vocabulary of motifs.

This object belonged to a set of church ornaments, probably fulfilling the function of a panel on a dalmatic (the priestly garment worn by deacons). It is one of a set of matching ecclesiastical embroideries whose colour and imagery were appropriate for the liturgy of the dead and were therefore used at funerals. The Spanish style of dalmatic had matching apparels on the front, back and sleeves, those on the body being substantially larger (squarer) than those on the sleeves (rectangles). Usually, those on the body of the garment were attached between the waist and the hemline, those on the sleeves towards the edge with the imagery clearly visible when the arm was at rest by the wearer's side. (Pauline Johnstone. High Fashion in the Church. Leeds: Maney, 2002, p.142). The other panels in the collection that arrived with this panel and match it in design, seem to be two for the body of a dalmatic and two for the sleeves. They would probably have been attached to a garment of some variety of black silk (possibly velvet). Our own collection has a sixteenth century funerary dalmatic intact, with its panels in the correct position (T.766.1919).

The creation of embroidery and the learning of embroidery skills followed a similar path to that of sculpture and painting, and recently serious research has begun on its professional development in certain local centres in Spain (e.g. Marta Laguardia's work on Salamanca). Basically, skills were learnt through apprenticeship in a guild and groups of objects were made according to similar specifications (e.g. the workshop of the sculptor Gregorio Fernandez or that of the painter Francisco Zurbaran). Successful execution of standard imagery was valued (where today 'creativity' and 'originality' are highly prized). In some cases, embroidery was learnt in convents and nuns were skilled needlewomen who could make church ornaments.

By the seventeenth century the stark imagery of skull and crossbones was well-established shorthand for the fragility of human life, the transitory nature of the flesh, being used on gravestones and monuments as well as in painting and textiles. The raw drama of this imagery fits in with the principle of arousing deep emotion in the viewer, a principle promulgated in the Council of Trent (1545-63) and adopted in countries that espoused Counter-Reformation ideology. In many ways the imagery and its attention to the fragility of human life echoes the 'vanitas' paintings of the seventeenth century, such as the works by Juan Valdés Leal, In Ictu Oculi and Finis Gloriae Mundi in the Iglesia del Hospital de la Santa Caridad in Seville. (Juan de Valdés Leal (1622-1690). Cordoba: Caja Sur Publicaciones, 2001, pp. 48-9)

Maria Dolores Vila (Museo Nacional de Artes Decorativas, Madrid) indicates that there are magnificent examples at the Monasteries at El Escorial and Guadalupe in Spain, but almost all convents or small parishes had some such items, and great houses had them with their coats of arms added (Personal communication by email, 30 May 2006). She noted the publication of certain objects in Las Edades del Hombre: el arbol de la vida. Catedral de Segovia, May-November 2003, pp.391-392, 275-78; Huellas. Catedral de Murcia, 2002, p. 340. Similar emphasis on skeletons, crosses, etc. is found in embroideries on chasubles etc. Johnstone illustrates a particularly dramatic chasuble made in Augsburg before 1630, and a dalmatic made in the Northern Netherlands in the second quarter of the seventeenth century. Its apparels follow the Netherlandish rather than Spanish fashion (Johnstone, p.96.)

Apparel of embroidered silk velvet applied with silk satin, probably made in Spain, 1600-1650. 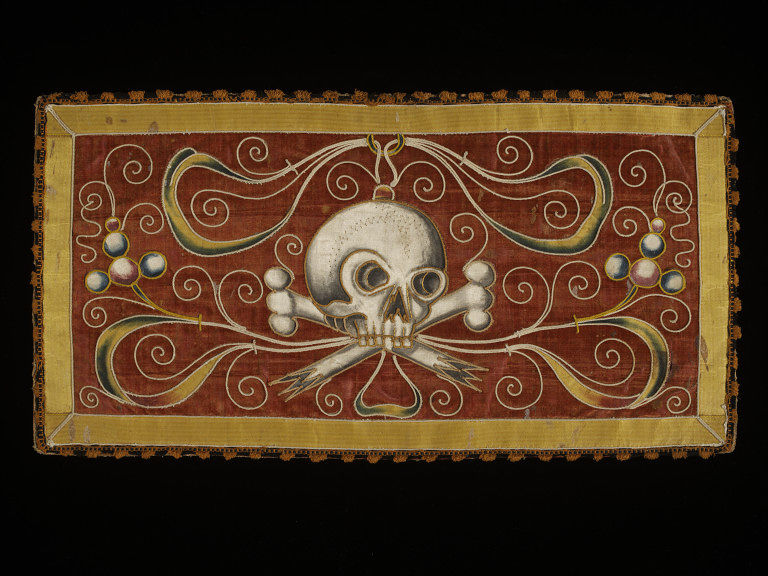