Like many of Alvar Aalto's furniture designs, this chair was conceived of for the Paimio sanatorium (1927-32), an isolation hospital for tuberculosis patients. This model was for its lecture hall. Anxious to provide seating that was as welcoming and comfortable as possible, Aalto decided against tubular-steel designs and opted for an all-wood construction. These armchairs, manufactured for sale by Otto Korhonen's firm and from 1935 by Artek, became among the most successful of Aalto's productions in the 1930s. The structural rationalism of separating support and supported was a fundamental principle of Modernist design. The delightful juxtaposition of coloured plywood seat and back and light birch frame has an organic quality to it, which invites one to sit down in the chair. By this time Aalto had mastered the possibilities of forming plywood in hot metal presses; the freeform curve of the seat and back is both an expression of the free will of the artist and a masterly deployment of the elasticity of the material. The chair is still in production by Artek.

Plywood armchair with one-piece seat and back formed from a single sheet of curved plywood, painted red, supported on two frames of moulded laminated wood that form the arms and legs on each side of the chair.

Each laminated frame is stamped '103' on its underside. The two frames for Aalto chairs were always made from a single sheet of wood (the sheet cut in half and each piece used to make the laminations for a single frame). By stamping each outer veneer, the two halves from the same sheet could be matched when the chair was constructed. This armchair also has a label for 'Finmar' on its underside. Finmar were the British distributers of Aalto furniture - the chairs were often sent to Britain in pieces, meaning that the stamps on the frames were needed to match up parts before assembly.

The cuts into the chair back do not appear on all Paimio chairs - they tend to have been used only on early production versions. It isn't clear whether these were purely aesthetic, or if they had a practical role in bending the tight plywood curve at the top of the chair back. After Artek was founded in 1935, production of Aalto's furniture designs became increasingly standardised (with less choice of colour, and less oportunity to order to an individual specification in terms of size). This standardisation was in part an attempt to increase the quality of production while meeting increasing demand for large orders.

Painted, moulded 7-ply birch plywood seat and 4-ply laminated birch frame with solid birch struts. The paint is not original to the chair.

The seat is 7 ply, cross-grained. The veneers are between 1 and 1.2 mm thick

There are 3 struts on the chair – two that attach the seat to the frame and one that braces the legs under the seat. All 3 are solid wood.

This chair was designed for the Paimio
Tuberculosis Sanitorium in Finland and
made by a small factory. In 1933 the
factory began manufacturing the chairs
for general sale, alongside other furniture
designs by Finnish architect Alvar Aalto.
Aalto’s furniture was exported in large
quantities to the UK and the USA, where
its innovative use of plywood had a
significant impact on other designers.

This chair, the best known plywood chair of its time, is one of the defining objects of 'humanised' Modernism. Intended for the Paimio sanatorium, it has an organic, biomorphic quality that invites the user to sit down. The design has been widely imitated and remains in production today. 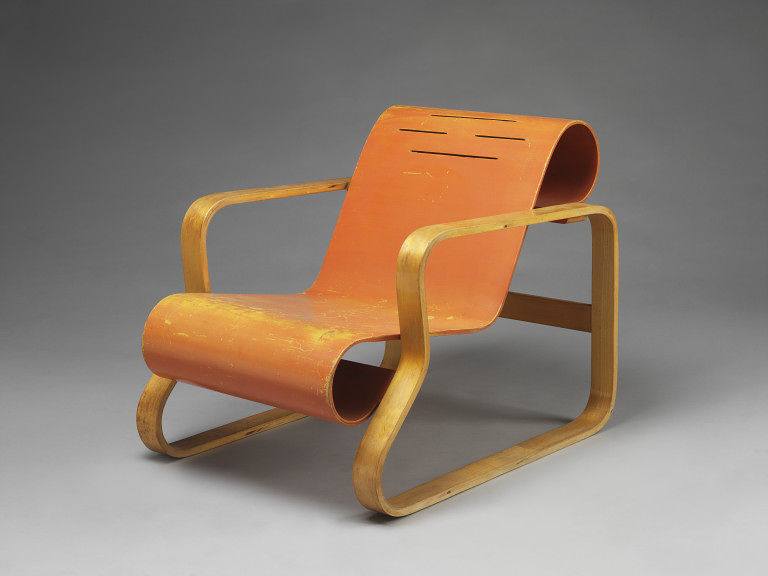