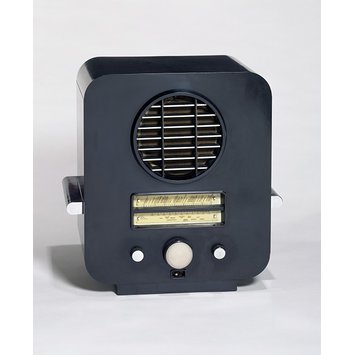 Radio emerged as a global mass medium during the 1930s. This created unprecedented opportunities to design the new medium's visible presence. Landmark studio and headquarters buildings were designed, such as Broadcasting House in London, and Radio City in New York, and designers turned their attention to domestic wireless receivers. Most consumer radios were essentially rectangular wooden boxes, often with some Rexine or fabric detailing. However, one of Britain's largest radio manufacturers, the Ekco company of Southend, adopted the plastic Bakelite. This had been created by Dr Leo Baekland in the US before the First World War, as a synthetic material that lent itself to cheap mass-production moulding. To promote the status of what many consumers regarded as an inferior substitute for wood, the firm's founder E.K. Cole commisioned radical modernist designs. The two most famous were by the architects Chermayeff and Coates.

The Russian-born Chermayeff was firmly in the Modernist camp in Britain. He was a successful designer of modernist tubular-steel furniture and a member of MARS (Modern Architecture Research Society), which was devoted to the promotion of Modernism. Shortly after designing the EC 74 radio, he worked with Erich Mendelsohn on the design of the De La Warr Pavilion in Bexhill-on-Sea, Sussex, one of the most important modernist buildings in Britain. His approach to the radio could also be considered architectural, emphasizing the two basic forms already associated with this apparatus, the squared box and the circular tuning dial and knobs. He combined them in a simplified geometric whole, which also suggests something of a machine-age 'face'.

Vertical rectangular black plastic cabinet, with rounded corners, it is stepped and undercut at its base. About a third of the way up on both sides is a moulded, horizontal, rounded projection running from the back of the cabinet and stopping short of the front; this projection is faced at the front with chromed metal. These projections function as handles. Within the top half of the front of the cabinet is situated a large, circular loudspeaker aperture. It is recessed behind a black plastic grille, and has a fabric covering. The horizontal elements of the grille are faced with chrome. Below the loudspeaker and in-line with both handles is a horizontal rectangular tuning scale, this scale being subdivided horizontally into two narrow segments. Tunring markings are printed onto transparent celluloid detachable strips. Below the scale, centrally placed, is a large circular control knob with a serrated edge. The front of this knob is faced with chrome. To the right and left of this knob, and in-line, is a smaller knob of similar design. Immediately below the central knob is an on/off switch.

Purchased by the Museum in 1977, from Ruperts of Ealing [77/1001]. On entry to the Museum, the condition of this radio was noted as 'good, some minor scratching'.

Chermayeff was a leading Modernist architect and furniture designer. In creating a radio, he combined the squared box and circular tuning dial and knobs into a simplified geometric whole with an oddly machine-age 'face'. Coates's radio rejects the box form in favour of a circular design that resembles a loudspeaker or the control panel of an aeroplane. 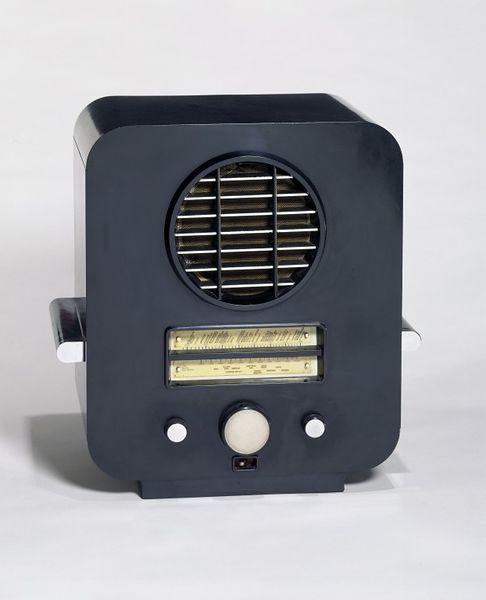