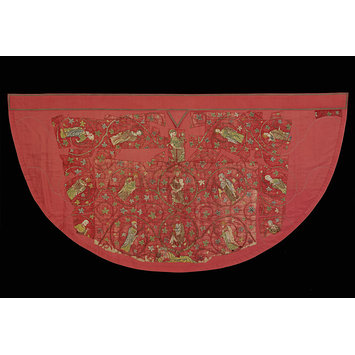 Fragments of a cope, pieced together. The orphreys, hood and side fronts are missing. Red (faded) silk in twill weave, embroidered with silver-gilt and silver thread and coloured silks in underside couching and split stitch, with details in laid and couched work. The shape of the pieces suggests that the cope was cut up into an altar frontal or dossal and chasuble.

Embroidered with silver-gilt and silver thread and coloured silks in underside couching and split stitch, with laid and couched work, on silk twill reinforced with linen

The cope was in the Roman Catholic chapel at Brockhampton, near Havant, Hampshire, from 1718 until 1857-58; then given to Mr Dunlop of Southampton, who in turn sold it to Rev. Father H. Van Doorne, Brixton Hill.

According to Donald King, copes of red samite decorated with the Tree of Jesse are frequently mentioned in the reigns of Henry III and Edward I.. There was one at St Paul's Cathedral in 1245; Bishop Middleton of Norwich (1278-88) gave one to Canterbury, and Bishop Bitton (1292-1307) gave one to Exeter. Stylistically, this example is related to the Vatican cope in the Museo Sacro of the Vatican Library, Rome, the copes of Saint Bertrand de Comminges, and the John of Thanet panel (V&A T.337-1921).

Embroidered fragments from a cope with The Tree of Jesse 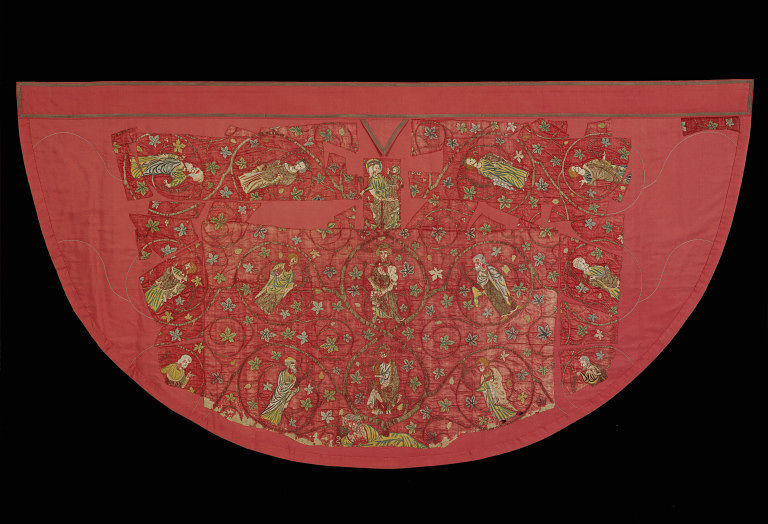