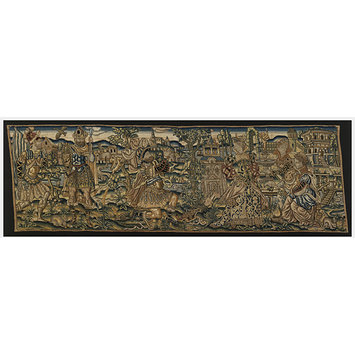 This embroidered panel would have belonged to a set of three valances, their purpose to adorn the head of a bed, concealing the pole and rungs of the bed curtains. Often embroidered with brightly coloured wools and silks, valances provided a means of decorative insulation from the draughts, cold and humidity that could plague sixteenth-century houses.

Beds and their textiles figure prominently in inventories of effects from the Renaissance, an indication of how greatly they were valued. Individuals of high rank conveyed their position to their contemporaries through conspicuous consumption, with a lavish display of costly textiles.

This valance is worked entirely in tent stitch, a term that is derived from the French word 'tendre', meaning to stretch or extend. This was a reference to the stretching of the canvas on which the embroidery would be worked. French embroiderers, however, employed a different term for the stitch, calling it petit point, or 'little stitch'.

The lively scene depicted here is that of the mythological union of Mars and Venus in the Garden of Love. Mars has laid his weapons aside and is kneeling in supplication to Venus, an act that symbolised Love vanquishing Aggression. This was a most appropriate subject for a valance, destined as it was to adorn the head of a bed.

Valance embroidered in coloured wools and silks in petit point on canvas. Three female figures in french court dress are positioned on the right: one of them is seated, one standing and one rising from a seated position with her arm outstretched, pointing to the standing female and kneeling male figures who are the focal point of the scene. Three men dressed as warriors are positioned on the left; they wear cuirasses and plumed helmets. The male figure farthest to the left carries a white banner; the man in the centre stands sentry-like holding a shield and a spear; and the last and most elaborately dressed figure is kneeling on the ground, his sword and shield cast aside.

The subject of the valance is Mars (Roman God of War) and Venus (Roman Goddess of Love) in the Garden of Love. In this scene, Mars has laid his weapons aside and is kneeling in supplication to Venus, with both deities flanked on either side by their attendants. This symbolic act represents Love vanquishing Aggression. Venus, clearly delighting in her triumph, turns towards her attendants, casting an imperious backward glance at her suitor. As if to reinforce further the humbling of the God of War, a nearby squirrel mimics Mars's pose. This scene of courtship takes place in palace grounds with an abundance of flowers, trees and shrubbery, against a backdrop of an architectural landscape, through which flows a river. Animals are interspersed throughout the landscape, including a dove, a pigeon, a squirrel, rabbits, swans and snails.

The Garden of Love, here made known to us by the prominent fountain of Cupid, shown with his quiver, raising a single arrow in the air, was a common parable in the renaissance ornamental repertoire, characterised by its idyllic landscape and the languid couples who people it.

Canvas embroidered in wool and silk

Owned by Richard Greville Verney, the 19th Lord Willoughby de Broke (1869-1923), whose family seat, Compton Verney, Warwickshire, was sold in 1921. The valance, along with four other valances and panels (including 'Lucretia's Banquet'), embroidered in the same style, were removed from the manor house and sold to the museum in November 1913. This was no doubt an attempt on Verney's part to recoup some funds in the face of considerable debt. In the correspondence in the acquisition file, Mr. Kendrick reports that Willoughby de Broke had expressed the intention to use the profits to meet the cost of framing a tapestry that had been on loan to the museum from Compton Verney (now in the V&A museum's permanent collection: T.1-1921). (RP/1913/2883M)

Exactly when the valance entered the Willoughby de Broke family's possession is unknown; Compton Verney had been in the family's ownership for nearly 600 years. The family papers are held at the Shakespeare Birthplace Trust Records Office in Stratford-upon-Avon. It follows that the 1642 inventory of Greville Verney's effects might be worth consulting. Robert Bearman's publication mentions that the inventory lists velvets and tapestries etc.

Reference:
Bearman, Robert. Compton Verney: A history of the house and its owners. Stratford-upon-Avon: The Shakespeare Birthplace Trust, 2000.

Historical significance: The valance bears witness to the late renaissance vogue for 'petit-point' embroidered hangings, depicting richly costumed figures within a scène galante. This valance belongs to the rarest of three categories identified by Margaret Swain: that of depictions of figures in French court dress in a verdant landscape. Of particular note is the valance's thematic and uncharacteristic treatment of love. Unlike many contemporary embroidered bed hangings, in which allegorical references to love are made by the presence of anonymous figures promenading generic landscapes, engaged in amorous pursuits, this valance depicts a specific mythological union unfolding within an identifiable site: that of Mars and Venus in the Garden of Love.

Function
This embroidered panel would have belonged to a set of three valances, their purpose to adorn the head of a bed, obscuring the pole and rungs of the bed curtains. Embroidered with brightly coloured wools and silks, valances provided a means of decorative insulation from the draughts, cold and humidity that plagued sixteenth-century houses.

Beds and their textiles figure prominently in inventories of effects from the Renaissance, an indication of how greatly they were valued. Those individuals who were of high rank, conveyed their position to their contemporaries through conspicuous consumption, with a lavish display of costly textiles.

Embroidery
The valance is embroidered entirely in petit-point, the French name for tent stitch (also known as half stitch), which enjoyed a period of great popularity in the last few decades of the sixteenth century. Despite being a relatively simple stitch, which enabled the embroiderer to cover large areas of ground comparatively quickly, petit-point nevertheless aspired to the same elevated status as tapestry and was distinguished from other stitches by its classification as needlework tapestry (la tapisserie à l'aiguille). By virtue of its simplicity, petit point was practised by amateur and professional embroiderer alike. The stitch lent itself well to naturalistic motifs and bold, albeit somewhat geometric compositions. This valance would most likely have been worked by a woman of noble birth; embroidery was held to be an essential skill for any accomplished woman of aristocratic rank. However, due to the size and complexity of the composition, the possiblility remains that it may have been executed by a professional embroiderer, who may have been employed as part of the household.

Subject
The Garden of Love, identifiable here by the prominent fountain of Cupid, shown with his quiver, raising a single arrow in the air, was a common parable in the Renaissance ornamental repertoire, characterised by its idyllic landscape and the languid couples who people it. The garden served not just as a suitable and decorative site for courtship, but as a visual metaphor for love itself. This was a device frequently employed in the decoration of Italian furniture, most commonly employed for objects commissioned as wedding gifts. Thus, allegorical depictions of love on valances such as this one, reinforced to the viewer both the role and status of the bed and the part it played in the conjugal relations that were pivotal to the continuation of a family's lineage. The enduring theme of love vanquishing aggression, as depicted on this valance, was a subject entirely suitable to the the context of the bedroom.

multi-coloured embroidered, wool on linen, 1575-99, French; Mars and Venus in the Garden of Love