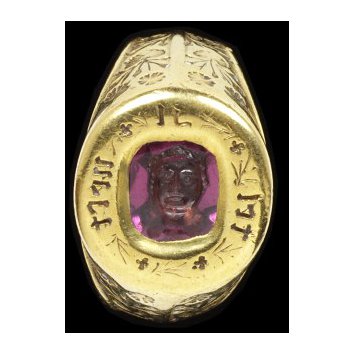 Rings are the most commonly surviving medieval jewels. They were worn by both sexes, across all levels of society. Some portraits show wearers with multiple rings across all their fingers. Although rings were worn for decoration, they also had important practical functions. Signet rings such as this one were pressed into sealing wax to create a unique, legally recognised signature. It has been suggested that this finely carved spinel may be the stone listed in the 1379 inventory of King Charles V of France, described as The signet of the King which is the head of a king without beard; and is (made) of a fine oriental ruby; this is that which the King seals the letters which he has written with his (own) hand.

The head on the ring resembles that of Charles V seen on coins, but the style of the ring itself is more typical of the 15th century. It is possible that although the spinel was carved in the mid 14th century, it was reused in a slightly later ring.

Gemstones were highly valued in the medieval world, sapphires, rubies, garnets, amethysts and rock crystal being the most commonly used. Diamonds were highly valued but much less common. They were valued, as now, for their colour and lustre but also for their perceived amuletic or talismanic powers. Books known as 'lapidaries' listed the powers attributed to each stone. Rubies and spinels (known as balas rubies) were said to promote health, reconcile enemies and combat excessive lust.

Gold signet ring with an oval bezel set with a purple spinel intaglio of a crowned head and engraved in black letter tel il nest The shoulders engraved with sprigs, with traces of enamel

England (made)
France (intaglio, made)

ex Arundel and Marlborough Collections. Listed on the Beazley Archive website as http://www.cvaonline.org/XDB/ASP/recordDetails.asp?recordCount=1&start=0

Gold signet ring with an oval bezel set with a purple spinel intaglio of a crowned head and engraved in black letter tel il nest ('There is none like him'). The intaglio France, late 1350-1400, the setting England, 1400-1500. 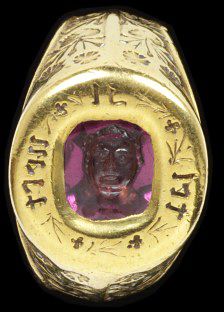