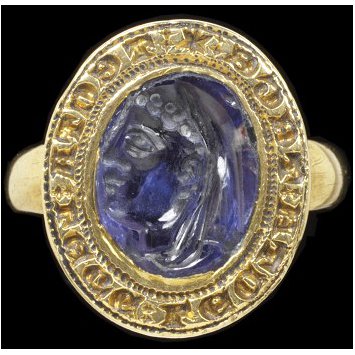 This medieval ring is set with a much earlier sapphire intaglio, probably carved in the Greek World around the first century BC. In the Middle Ages, between the 12th and 14th century, ancient gems were frequently re-set for use as personal seals, authenticating letters and legal documents. Roman or Hellenistic images of gods or mythological figures were not so much misunderstood as re-interpreted in a Christian framework. A Ptolomaic princess such as the one on this seal, might therefore be used to symbolise the Virgin Mary, often shown with a veil over her head. In medieval Constantinople, gemstones engraved with subjects from classical antiquity were sometimes labelled with the names of Christian saints such as an amethyst portrait of the Roman emperor Caracalla which was recut and renamed as Saint Peter.

The inscription around the bezel of the ring: 'Tecta lege, lecta tege' is translated as 'Read what is written, hide what is read' and shows the ring's use as a personal signet. The sapphire is set in an open-backed mount, allowing it to touch the skin of the wearer. Direct contact of the stone with the skin was believed to convey a medicinal or amuletic benefit. A lapidary describing the powers and uses of gemstones, written by Marbode, the eleventh century bishop of Rennes claimed that sapphires had the power to dispel envy, detect fraud and prevent witchcraft.

Europe (possibly set in England, made)
Alexandria (made)

'*TECTA: LEGE: LECTA: TEGE'
'Read what is written, hide what is read'
Engraved around the rim of the bezel, in Latin, in Lombardic lettering

Found in a well in Hereford in 1824. Exhibited at the Society of Antiquaries by the Rev. Charles J. Bird, FSA and documented in the Gentleman's Magazine, 1830,vol. 100, part1, p.65. Also exhibited by Edmund Waterton to the Society of Antiquaries, Thursday March 8th, 1855 and recorded in the Proceedings:
‘Edmund Waterton , Esq. F.S.A. exhibited Seven Rings, five of gold and two of silver, from his Collection, found at different places. One, of the gold, representing the Holy Trinity, the Virgin Mary, and St Anne and a Pieta, dug up at Offord Abbey; and another set with a Sapphire on which is engraved a veiled female head, around which is the legend in Gothic characterss, TECTA. LEGE. LECTA. TEGE. One of the silver rings, dug up at Bury St Edmund’s in 1853, had a monogram.’

Shown at the 1862 Special Loan Exhibition at the South Kensington Museum.

The sapphire was identified by Dr Martin Henig in 2006 as a high quality Hellenistic carving, possibly cut down from a larger stone. A comparable example is cat. 387 in Dmitri Plantzos 'Hellenistic engraved gems', Oxford, 1999.

Gold signet set with a sapphire intaglio of a woman's head. Inscribed around the bezel :*TECTA: LEGE: LECTA: TEGE. Possibly set in England, 1275-1325 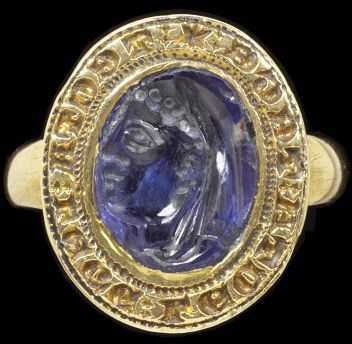