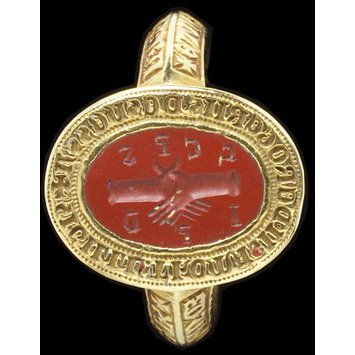 This fine thirteenth century ring combines a engraved gold hoop with a re-used Roman intaglio of the third century AD. The design of two clasped hands was known in Latin as 'dextrarum iunctio' or 'joined right hands' but nineteenth century collectors called these rings 'fede rings', from the Italian 'mani in fede' or 'hands clasped in trust'. In Roman times, it was a sign of alliance or union and in medieval rings, the symbol is often associated with romantic inscriptions and found on love or marriage rings. Ancient carved gemstones were often re-used in the middle ages to show the erudition of the ring's owner. Roman stones might have been found in the ground as casual finds or preserved and traded through the Eastern Mediterranean and Italian cities.

This ring would have been used as a signet. Personal seals (secreta) provided an essential legal safeguard and were used to witness documents such as wills, deeds of gift, loans and commercial documents, personal letters and land indentures. The ring gains an additional signifcance through the phrases engraved around the bezel and hoop. Alongside the name of the owner, Thomas Roggerri of Suessa, there are religious inscriptions which may have been intended to have an amuletic effect. The phrase 'Et verbum caro factum est et habitavit in nobis' (And the Word was made flesh and dwelt amongst us, John, i, 14), according to a manuscript in the Chapter Library at Canterbury, could also be written on a scrap of parchment and worn as an amulet against paroxysms or fits.

Said to have been found in the church of Santa Maria in Comedia, Suessa Arunca (near Naples), in 1845. The ring was exhibited to the Archaeological Institute by Sir Frederick Madden at the meeting of 7 November 1851, whilst in the collection of George Borrett. It passed into the Guilhou Collection. Sold at the Guilhou Collection sale, Sotheby & Co. 1937, cat. 564. and acquired by Dame Joan Evans.

It has been suggested by C. Edwards in 'History and Poetry of the Finger ring' (New York, 1855) that the owner may have been a member of the Neapolitan family Roggieri.

Gold signet ring with an oval bezel set with a Roman jasper intaglio with a fede device and the initials CCPS/ IPD, and inscribed in lombardic characters with religious passages and phrases, Italy, 14th century, the intaglio 3rd century. 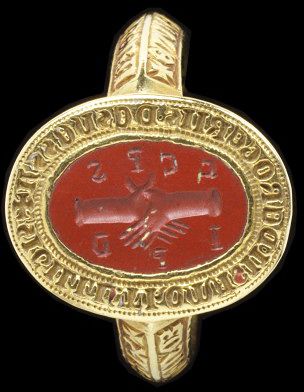