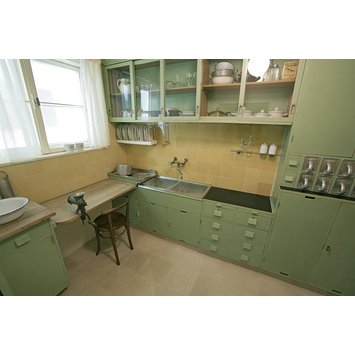 Between 1925 and 1930, Frankfurt was a centre of advanced social and architectural thought and was the only German city where all municipal construction was controlled by modernist architects. This is one of perhaps 10,000 kitchens made to the designs of the Austrian architect Margarete (Grete) Schütte-Lihotzky, installed in flats in Frankfurt during the 1920s. Schütte-Lihotzky worked in the Municipal Building Department, which controlled all aspects of building in the city, including housing. The so-called Frankfurt Kitchen should be regarded as part of a modernist effort to make all aspects of daily life more rational, efficient and hygienic, and less time-consuming. It was the first fitted kitchen and the prototype for all subsequent built-in kitchens. In its day it was widely publicized in Germany and abroad, and a film was even made about it in 1928.

The design of the kitchen was based on the principles of F.W. Taylor's 'Scientific Management', a system that analysed the most efficient ways of undertaking tasks in the home and workplace. The kitchen was only big enough for the housewife to work alone (few men in the 1920s would have spent time there). All the surfaces are easy to clean and without mouldings that trap dirt. A noticeable feature is the bank of metal storage containers for commodities like flour, rice and sugar. The housewife could easily reach them without even opening a cupboard door. There were no electric refrigerators at the time, but a low-level cupboard was vented from the outside to keep food cool. The ironing board was hinged to the wall and could be lowered to use. Even the disposal of rubbish was considered: the waste-bin was in its own cupboard that could be emptied from outside the kitchen in the hall.

Three different sizes of kitchen were made for various sizes of flats. This kitchen was recently rescued from a Frankfurt apartment after almost eighty years of use. It had only been repainted once in that time, and is seen here restored to its original paint scheme. The electric and solid fuel stoves probably date from the late 1930s.

The vast Frankfurt housing projects built by Ernst May's Municipal Building Department (where architect Grete Lihotsky worked) aimed to standardize building elements and mechanize construction along Taylorist and Fordist lines. These attempts at rationalization and efficiency applied also to the design of flats and, notably, to the design of this kitchen, versions of which were installed in around 10,000 of the Frankfurt flats. The Frankfurt Kitchen (as it was known at the time) was not the first fitted kitchen, or even the earliest Modernist fitted kitchen, but it was the first to be made in quantity. It was undoubtedly the most successful and influential kitchen of the period, and stood as a symbol of the principles of 'scientific' professionalization of the domestic workspace.

Like many designers aiming at efficiency in the home, Lihotsky would have been conversant with Erna Meyer's hugely popular manual for the home, Der neue Haushalt (The New Household, 1926), which was itself based on the classic American text The New Housekeeping: Efficiency Studies in Home Management (1913) by Christine Frederick. In these, the bodily movements and circulation patterns of the housewife as she engaged in daily work were analysed to arrive at new principles for household design and labour. These were reflected in the close analysis of the positioning of each element of the Frankfurt Kitchen in relation to others to minimize unnecessary steps, and in the provision of features aimed at saving labour and providing physical comfort. Among these were the work table for preparing food under a light-giving window and adjacent to the sink, both at a height for using while seated; the storage chutes with handles and pouring spouts for dry comestibles, obviating the need for the steps involved in opening cupboards, then jars, and spooning out the contents; and the drop-down ironing board, omitting the need for another object requiring assembly and storage.

Not only was the idea of labour-saving important to the layout of the kitchen, but it was central to its construction and cheap price. The cabinets had no backs and, owing to the continuity of the units, there was just one side wall required. Financing was offered to flat residents to enable them to buy a kitchen, which they paid off through their monthly rent. The kitchen was made in three sizes, to fit different flats, including those with no servants, one or even two servants (which was possible even for those living in municipal housing, given the low wage costs at the time). The small size of the kitchen reflected a pursuit of efficiency, the belief that eating in the kitchen was unhygienic, and a desire to save space for the living areas of the flat. The principle of the compact kitchen owes much to the design of galleys in ships and trains of the era.

Grete Lihotzky's kitchen was built into about 10,000 Modernist flats constructed by Frankfurt's Municipal Building Department. Though not the first fitted kitchen, it was the most successful and innovative and the first to be made in quantity. Designed for maximum efficiency and hygiene, it stood as a symbol of the 'scientific' professionalisation of the domestic workspace. The layout was based on careful analysis of the bodily movements and circulation patterns of the housewife as she engaged in daily work (see diagrams to your right). Every element was designed to save unnecessary labour and movement. 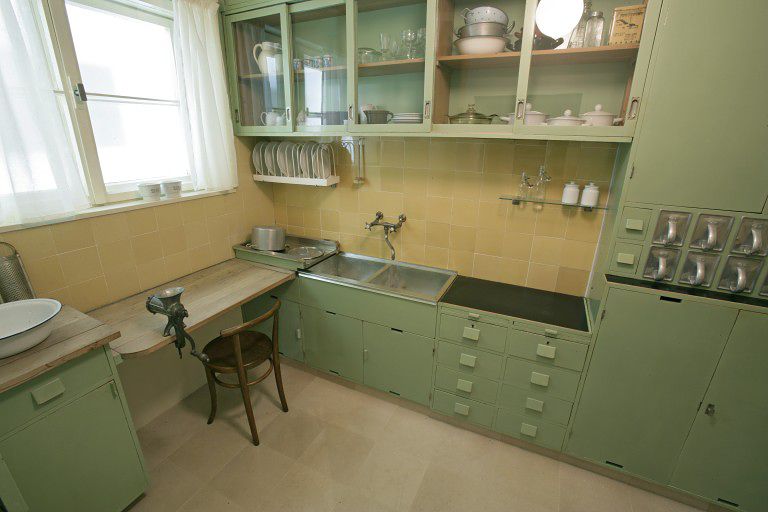