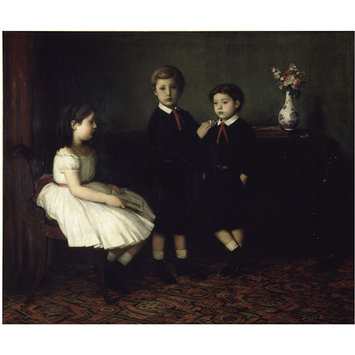 Georges Bellenger (1847-1918) was a French painter, illustrator and lithographer. A pupil of Horace Lecoq de Boisbaudran (1802-1897) at the ‘Petite Ecole’ in Paris, he exhibited work at the Salons in Paris from 1864 and in London between 1875 and 1879. He was notable for his still-life and landscapes but he also produced portraits such as this one. He was perhaps best known for his illustrative work for French writers such as Emile Zola.

This particular painting is one of a group of 20 family portraits commissioned to different artists. This work portrays C.A. Ionides’s eldest children: Euterpe, Alexander Constantine called ‘Alec’ and Constantine Albert called ‘Cotz’. They are portrayed in their home, 8 Holland Villas Road, which presents a typical mid-19th century bourgeois interior with a Turkish rug, Neo-Renaissance table and a porcelain vase with floral motifs, items which are representative of their father’s furniture collection. Ionides extensive collection included also over a thousand paintings, drawings and prints and was bequeathed to the museum in 1900.

On the left, a young girl in a white dress sits on a chair in profile, she holds an open book in her hands; ext to her stands a boy looking straight out at the viewer; his arms rest on the shoulder of a shorter boy who stands with his hands in his pockets and his right leg crossed in front of his left; both boys wear a dark, knee-length suit; in the background is a table on which are two books and a blue and white vase containing pink, red and white flowers.

Historical significance: This oil painting on canvas is signed and dated 'Georges Bellenger 1869'. It depicts the three eldest children of Constantine Alexander Ionides (1810-1890) and his wife Agathonike Fenerli (1845-1920) - Euterpe, Alec and Cotz in their home at 8 Holland Villas Road in London. As the painting was made there, Bellenger probably made the journey from Paris to London that year. Like a few compatriots such as Alphonse Legros and Henri Fantin-Latour, Bellenger was probably seeking for new commissions and patrons on the London art market. Under the influence of Alphonse Legros, a close friend with whom he travelled abroad, Ionides bought a wide selection of nineteenth-century French paintings, which adds up to a consequent collection of Italian and French Old Masters.
This painting is a typical example of Realist portrait paintings which developed in France in the second half of the 19th century. It presents a direct objective representation of the sitter in the vein developed by Courbet and his followers. The Turkish rug and Neo-Renaissance table in the background as well as the vase are representative of a mid-century 'bourgeois' interior but also reflects Ionides' taste for collecting furniture and ceramics. This particular painting is one of a group of 20 family portraits which, while part of the original bequest, did not come to the museum until the death of his widow in 1920. 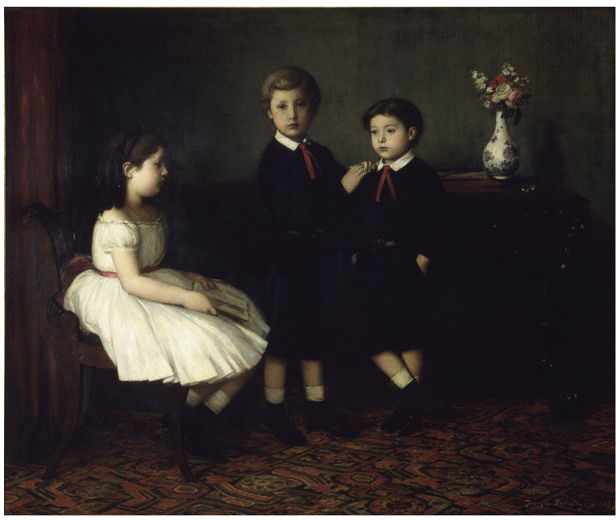