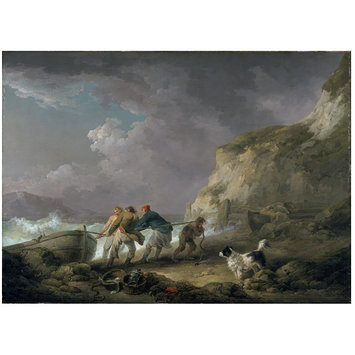 Seashore: Fishermen Hauling in a Boat

This oil painting is one of a large group of objects bequeathed to the Victoria and Albert Museum by Rev. Chauncey Hare Townshend in 1868. It was painted by George Morland (1763-1804) and is signed G. Morland, 1791, on the rim of the boat being hauled ashore.

George Morland showed a talent for painting at a very young age and exhibited chalk drawings at the Royal Academy as early as 1773, aged only ten years old. He was apprenticed to his father, the painter Henry Robert Morland (1716-1797), for seven years from 1777. During that time he was chiefly employed in the copying and forging of paintings, particularly seventeenth-century Dutch landscapes. He also made several sea-pieces after the French painter Claude-Joseph Vernet (1714-1789). This training no doubt informed his later work.

From 1790 onwards Morland was producing larger canvases than he had previously and became particularly associated with rustic and smuggling scenes. He had a prolific output, reputedly painting more than 800 works in the last eight years of his life but his alcoholism meant he was often plagued by debt. His paintings were extremely popular and widely copied by engravers to meet the demand that existed for his work in Britain, France and Germany.

The lower left quarter of the painting depicts four fisherman hauling a boat up onto the shore from a choppy sea. Another boat containing a basket and fishing nets is already safely stowed on the beach to the right of the image. A black and white dog watches the men's endeavours. Two baskets, one containing two fish, the other a lantern, lie amongst a mass of fishing nets and rope at the forefront of the image. The top half of the canvas shows brooding grey skies over cliffs which rise from the shore.

G Morland 1791
signed and dated on the far left hand side, on the rim of the boat.

Bequeathed by Rev. Chauncey Hare Townshend, 1868
Taken from Parkinson, Ronald, "Catalogue of British Oil Paintings 1820-1860", (Victoria & Albert Museum, HMSO, London, 1990), p.xix.
"Chauncy Hare Townshend 1798-1868
Born 20 April 1798 of a wealthy family, only son of Henry Hare Townsend of Busbridge Hall, Godalming, Surre. Educated at Eton and Trinity Hall, Cambridge (BA 1821). Succeeded to the family estates 1827, when he added 'h' to the Townsend name. He had taken holy orders, but while he always referred to himself as 'Rev.' on the title pages of his books, he never practised his vocation... . Very much a dilettante in the eighteenth-century sense, he moved in the highest social and literary circles; a great friend of Charles Dickens (he was the dedicatee of 'Great Expectations') with whom he shared a fascination of mesmerism... Bulwer Lytton described his life's 'Beau-deal of happiness' as 'elegant rest, travel, lots of money - and he is always ill and melancholy'. He died 25 February 1868. Of the many watercolours and British and continental oil paintings he bequeathed to the V&A, the majority are landscapes. He is the first identifiable British collector of early photographs apart from the Prince Consort, particularly landscape photography, and also collected gems and geological specimens."

This painting is reproduced as the frontispiece in BLK Henderson, Morland and Ibbetson, (London, P.Allan & Co., 1923). Henderson also offers a critique of the work on page 97; "Fishermen hauling in a Boat. If anyone wishes to test the criticism that Morland's pictures have no movement in them, or that the water is woolly, this study will prove that, in regard to his best work, such strictures are unjust. The drawing of the men shows strain throughout. The actual strain is visible in the bare muscular arm of the fair-haired man, and it is carried along through the group, and along the taut rope to the fourth and somewhat diminutive man who, with rope over shoulder, is an emblem of strain itself. The muscles of his calf swell with effort. Over the massive boat (suggestive of Robinson Crusoe's abortive first attempt) one sees a leaping wave. The water is liquid, transparent, and the crest has broken into spray that actually leaps, while crest after crest of this pale, green water rises and falls along the stormy surface. A mass of limestone towers to the right. In the distance, across the sea, hills are seen upon which the lowering storm has descended and great cloud-wracks sweep ragged and menacing over the sky. The paint is so thinly applied that one can see the grain of the canvas beneath."

Morland had begun to visit the Isle of Wight on a regular basis from about 1790, and continued to do so until the end of his career. This experience added a further dimension to his work, as he embarked on painting coastal scenes, including figures of fishermen, as well as more romantic characters of smugglers and dramatic scenes of shipwreck. The latter were inspired less by direct observation than by Morland's early training with his father, during which he had copied paintings by such artists as Claude Joseph Vernet (1714-1789). Vernet was a French painter who had worked in Rome and whose paintings had become popular with British collectors and who had specialised in such shipwreck scenes.

Catalogue entry from The Romantic Tradition in British Painting 1800-1950: Masterpieces from the Victoria and Albert Museum, selected by Mark Evans, V&A [Japan: Brain Trust], 2002: "In this painting Morland exploits the sensibility of his contemporaries to the concept of the 'Sublime', as defined by Edmund Burke. This aesthetic legitimised and popularised the evocation of terror and related responses, and led to a taste for paintings of shipwrecks. Morland does not dwell on the emotions of the fishermen although they have obviously just returned from risking their lives, out in the tossing sea. Nonetheless the picture inevitably invites us to contemplate their daily struggle with the elements and the ever present threat of death. (Katherine Coombs)". 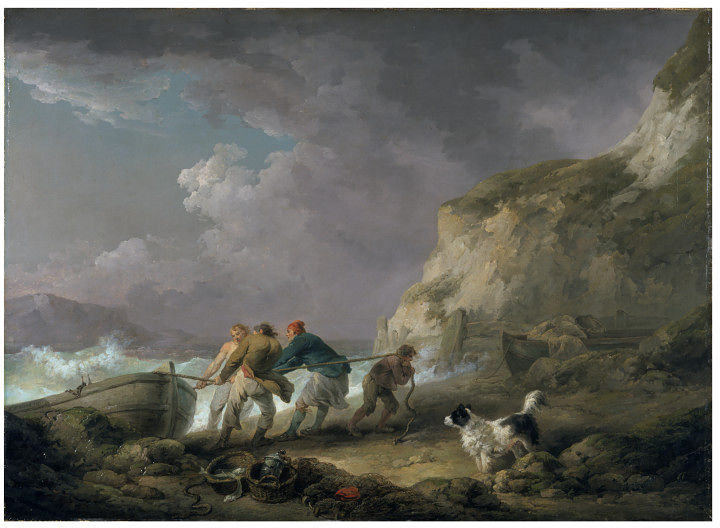