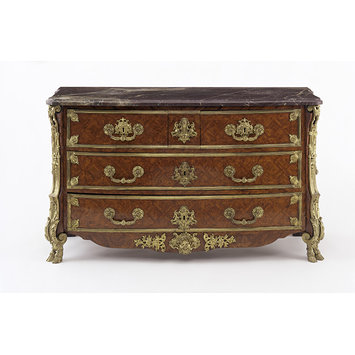 Commodes, essentially wide chests of drawers, were a form of furniture developed in France in the late 17th-century. The commode went on to become one of the most important and prominent objects in the 18th-century European interior. This is a very fine example of an early 18th-century French commode. Clearly made in an important Paris workshop, it is at the height of fashion for the 1710s - showcasing the geometric marquetry and marble top that were newly-fashionable in the period. The decorative elements on the commode were designed to have maximum effect on the room in which it was placed. The shimmering surfaces of the commode's marquetry would have been picked out by its elaborate and very finely chased mounts, resulting in a rich object that could have manipulated the effects of light and reflection in an early 18th-century French interior.

The commode has a softwood carcase, and is built as a dovetail box. The case top is made from softwood and oak planks, the case back is softwood planks painted black. The drawers are constructed from walnut, with softwood fronts and a purplewood veneer along their top edge. The front, sides and legs of the commode are entirely veneered with a complicated parquetry pattern, in kingwood. The marble slab is campan mélangé, a French marble from the Pyrénées.

Two very distinctive gilt-brass mounts run up the length of the commode's front corner edges. These have cloven hoofs at their bases, a single flower and scroll at their tops, and a floral and foliate design along their length. The mounts play more than a purely decorative function: the front of the case is supported on their feet, resting on a curve on the inside face of the mount.

Attached to each side of the commode is a large gilt-brass handle with a gilt-brass mount above it. Three gilt-brass acanthus leaves, two at the top and one at the bottom, adorn the outward-facing side of each back leg.

The drawer handles are twisted, with a mask at the centre of each. Each is attached to the commode via two rosettes, the rosettes of oak leaves and acorns. The central escutcheons are each flanked by two sphinxes. There are two additional escutcheons above the centre of the handle on each of the short drawers. These escutcheons are of a more simple design, with a floral, scrolling outline.

There is a gilt-brass mask in the centre of the apron, flanked on either side by horizontally-spreading sprays of flowers.

This commode was bequeathed to the Museum as part of the John Jones collection, in 1882. John Jones was a military tailor who made his fortune outfitting the British army. When he died, he left the South Kensington Museum a very large collection of French 18th-century decorative and fine art, including an important group of furniture.

The commode's provenance before entering Jones' collection is not known, and it has not yet been firmly attributed to any particular cabinet-maker. Two historians have suggested that it may have been made in the workshop of Andre-Charles Boulle, cabinet-maker to Louis XIV, but there is no definitive evidence to support this.

Regardless of whether or not it originated with Boulle, the commode was clearly made in an important Parisian workshop, as evidenced by the fineness of its construction, marquetry and mounts.

The commode was a decorative form of furniture which developed in France in the late 17th-century. Essentially a wide chest of drawers, commodes became one of the most prestigious and fashionable pieces of furniture in the 18th-century European interior. French commodes typically stood between windows, usually underneath a mirror. They would often have a marble top that matched the chimney-piece, and their sides were usually richly decorated with either marquetry or lacquer panels.

This commode is a very fine example of a type that started to be made in around 1710, in which a marble slab replaced a tradional marquetry top. The geometrical decoration on the commode would also have been high fashion in the early 18th-century - representing a trend away from floral marquetry.

Sargentson, Carolyn, 'Looking at Furniture Inside Out: Strategies of Secrecy and Security in Eighteenth-Century French Furniture', in Furnishing the Eighteenth Century. What Furniture Can Tell Us about the European and American Past, ed. Dena Goodman and Kathryn Norberg. New York and London: Routledge, 2007 (ISBN 10:0-415-94953-X), pp. 205-236, this piece discussed on p. 206.

Commode
1715-20
Essentially a chest of drawers, the commode developed in France in the late 17th century, becoming an increasingly desirable feature in the 18th-century interiors. This commode was the height of fashion in its time. The design shows taste moving away from floral to geometric marquetry patterns and from wood to marble tops, often made to match chimneypieces. Candlelight would have highlighted the fine gilded metal mounts.
France (Paris)
Softwood veneered with kingwood; walnut drawers; gilded copper alloy mounts; marble top
Bequeathed by John Jones [2014]
[Label text by Peter Thornton}
Commode
French (Paris); about 1710
Pine veneered with parquetry of kingwood; gilt bronze mounts. Slab of Campan melangé marble

This is an early example of the commode, a largely ornamental piece of furniture developed from the essentially practical chest "of drawers". The bold mounts are here not merely decoratie but perform the function of protecting vulnerable points.
It has been suggested that this impressive piece of furniture came from the workshops of the royal cabinet-maker Andé-Charles Boulle (d. 1732) since it is believed that drop handles backed by circles of acorns may have been a feature exclusively used by him.

The marble slab appears to be original. Marble from the Campan valley was exported on a large scale during the period of Louis XIV. 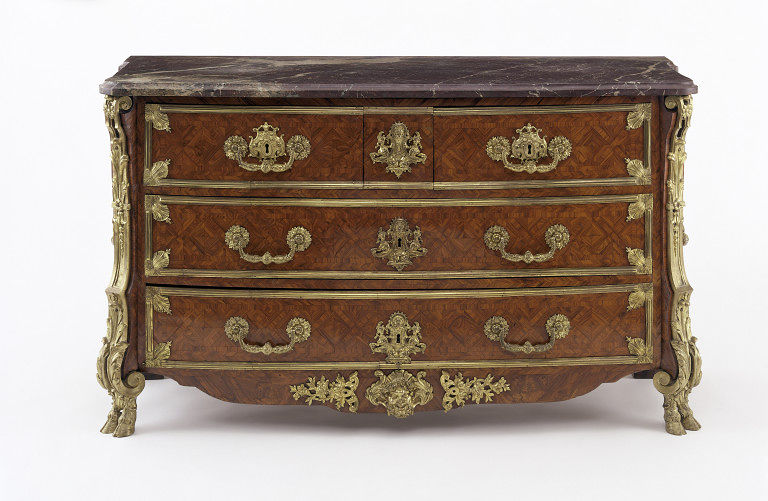