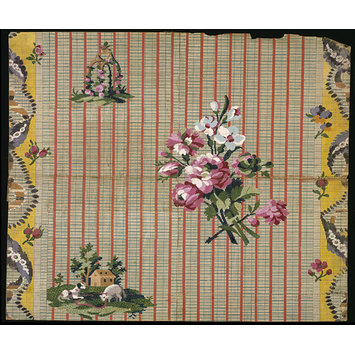 This design is a preparatory technical drawing for a patterned silk. It acted as instructions for the weaver about how to tie up the threads on the loom and then weave in the pattern. It is one of a group of 1577 such designs commissioned by a silk manufacturing partnership active in Lyon, the most prestigious centre of the silk industry in Europe from the 1660s onwards.

The partnership was called L. Galy, Gallien et cie from 1761 until the beginning of 1771 when the senior partner Louis Galy retired. Louis Gallien continued the business under the name L. Gallien et cie into the late 1780s, by which time he was specialising in plain rather than patterned silks. It was one of Lyon’s 400 manufacturing concerns mid century and it kept good records, noting on the back of the designs the company name, the number of the design, the date, and minimal instructions on how it should be woven. Such information allowed the manufacturers to go back to the original design work if they received requests for a reweave of the design.

The inscription on the back reveals that this design was completed on 26 July 1771 and was no. 1531 in the archive of L. Gallien et cie.

The design is painted in gouache on to point paper (a kind of graph paper). The pattern consists of a wide vertical stripe (half on each extremity of the paper) between which there are narrower stripes forming the ground of the fabric and three separate motifs - on the right a bouquet of stylised flowers, on the upper left a small rose covered pergola, and in the lower left an island with a sheep, a dog and a small house in front of a group of trees. Horizontal blue stripes are painted on every fifth row. On the front the name of the printer of the paper is engraved along with the type of paper. On the back is inscribed in handwriting in ink the name of the manufacturer, the date of the design, its number, the type of the fabric and some instructions for weaving.

The paper on which this design is painted reveals its origins in Lyon, centre of the French silk industry in the 18th century. It belongs to a group of thirty-one designs with similar motifs acquired by the V&A in 1972; they all date to the decade between 1761 and 1771. The manufacturer who commissioned this particular design was L. Gallien et cie., the heir to the firm of L.Galy, Gallien et cie.(1759-71). At a later date, the designs belonged to the designer Robert Ruepp (b. 1854) whose address was 7 rue Bergère in Paris and who exhibited silks of extreme Art Nouveau design at the International Exhibition there in 1900 and other rather less original designs in 1925. They passed into the hands of Sir Frank Warner, head of the famed English silk manufacturing firm, from the archive of which, part being sold at auction, the V&A acquired them in 1972.

The name of the company which commissioned and owned this design is on the back, L. Gallien et cie., but the designer employed to make the design is unknown. The date is handwritten on the back.

Attribution note: This is the second stage of design for woven patterns in silk, the technical drawing that allows the loom to be mounted. 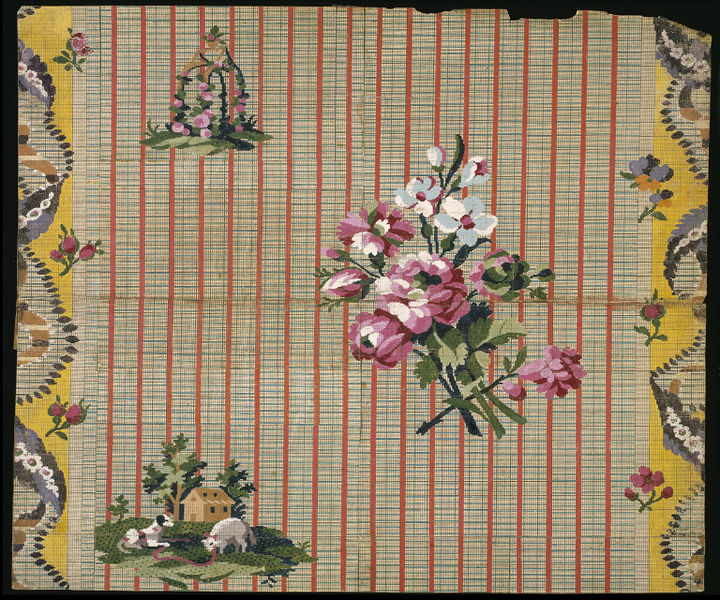