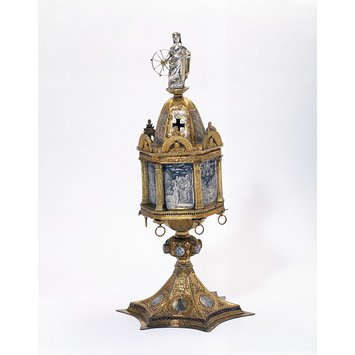 The history of this reliquary is inscribed on it. The arm bone of St Catherine of Alexandria was brought to Reggio from the East by a Franciscan friar, Fra Simone Donzelli. In 1496 the bishop of Reggio granted an indulgence ( indulgences were believed to speed entry into Heaven after death) to anyone who kissed the reliquary. St. Catherine, holding her symbol of martyrdom, the wheel, can be seen standing on the top of the reliquary.The inscription also notes the benefactor of the object, and other important religious figures relating to the town. The reliquary, designed to be viewed from all sides, may have been used in procession (the rings may possibly once have carried bells on them)on important church holy days, and on the feast day of the saint. This public use of the reliquary was an important reflection of the town's status as a devout community.

The bones and possessions associated with the saints and the possessions associated with Christ are known as relics. In the Middle Ages these were generally believed to have miraculous powers and were greatly venerated. Relics were kept in containers called reliquaries, which took many forms. Some were shaped to represent the saint or various parts of the body such as an arm, head, leg or finger (so-called 'speaking image' reliquaries). Others were designed as a monstrance, which placed the relic on view inside a glass cylinder (monstrare= to show). Another style of reliquary followed an architectural design. This piece is an example of a such a reliquary.

Reliquary, gilt copper and parcel gilt, with panels and medallions of niello work, crowned by a figure of Saint Catherine of Alexandria (holding her attribute, the wheel).

Hexagonal base ornamented with six silver medallions nielloed with the figures of Christ and some saints. These are placed on a ground of laurel decoration and leaf ornament. Above, six circular bosses, nielloed with busts of saints, sacred symbols and a heraldic shield, project from the knop.

The main structure is also hexagonal, with six foliated ornaments suspending six rings below. The pillars at each corner of the hexagon are surmounted by a cornice over which are lunettes enclosing busts of females. In between each of the pillars is a silver panel. Four are nielloed, illustrating scenes from the life of St Catherine (see label), one contains an inscription, the sixth has signs of an engraved border matching the other pictoral panels, but no other traces of niello and engraving. It appears unfinished.

The lid of the reliquary consists of a conical six-sided dome of silver, repoussé, chased and parcel-gilt. On one side of the dome is a hinged door with a cross shaped window, through which the relic would be viewed.On top of the dome is a figure of Saint Catherine, crowned, holding her wheel in her right hand.

From the Castellani Collection

The archives of Reggio record that in 1482 it was decided to make a receptacle for the relic, which was at that time in the Church of S. Spirito and later transferred to the cathedral. The reliquary was finished not later than 1496, the date of the indulgence recorded in the inscription, and remained in the cathedral until 1867, when it was sold to Signor Castellani, from whose collection it was acquired by the Museum in 1884.

Historical significance: St Catherine of Alexandria was known for protesting against Christian persecution to the Emperor Maxentius (306-12AD). She successfully debated with the philosophers sent by the Emperor to silence her and converted many of them. Maxentius ordered her to be tortured on a spiked wheel (now known as a Catherine Wheel), but the machine broke at Saint Catherine's touch. She was beheaded.
Reliquaries were rich in meaning. They were believed to be imbued with the holiness of the relic they preserved. The faithful believed that by touching a reliquary, they would receive some of this holy quality. Relics attracted pilgrims, who hoped for cure from illness and salvation by praying before them. Many made gifts and monetary donations to the Church in which the relics were held. Local people also gave in honour of their saint and to gain protection for themselves and families and their town. Thus relics could often reinforce a sense of identity within the community. Some reliquaries were used in religious processions or festivals, on holy days and the saint's day.
The object is a strong symbol of the identity of the town of Reggio. The inscription notes the artist and benefactor of the object, as well as other important religious figures relating to the town. The reliquary, designed to be viewed from all sides, may have been used in procession (the rings may once have carried bells on them). This public use of the reliquary reinforced the town's identity as an important and devout community.

Relics were kept in containers called reliquaries. Reliquaries took many forms. Some were shaped to represent the saint or various parts of the body such as an arm or finger (so-called 'speaking image' reliquaries). Others were designed as a monstrance, which placed the relic on view inside a glass cylinder (monstrare= to show). Another style of reliquary followed architectural designs, often in the Gothic style. This object is an example of a such a reliquary.

Reliquary, gilt copper and silver parcel-gilt with niello work and a figure of Saint Catherine of Alexandria, made by Raffaello Grimaldi, Italy, 15th century

Reliquary of the Arm-bone of St Catherine from the Cathedral of Reggio (Emilia).

Gilt copper and silver parcel-gilt, with panels and medallion of niello work; surmounted by a figure of the saint. The panels bear scenes from the legend of St Catherine: 1) The mystical marriage. 2) The conversion of the philosophers. 3) Martyrdom. 4) (Wanting) 5) The saint adored by the faithful. 6) An inscription. The medallions represent our Lord in the tomb, various saints, emblems and the arms of Reggio. 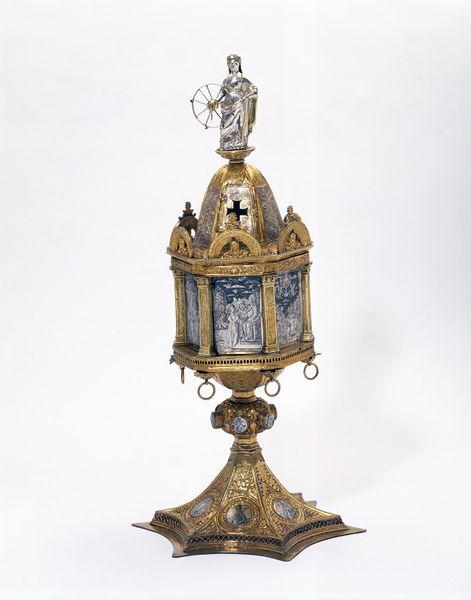