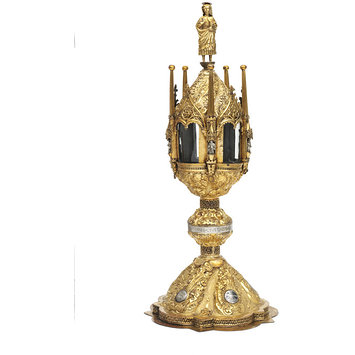 According to the inscription, this reliquary was commissioned by the Shoemakers' Guild of Reggio Emilia to contain a relic of St Homobonus of Cremona, who died in 1197. St Homobonus was their patron saint, and is also the patron saint of clothworkers and business people, as well as of the town of Cremona, where he lived. He is shown standing on the pinnacle of this reliquary.
The bones and possessions associated with the saints and the possessions associated with Christ are known as relics, which were kept in containers called reliquaries. In the Middle Ages relics were generally believed to have miraculous powers and were greatly venerated. The Reggio guild of shoemakers commissioned the reliquary both to honour their patron saint, and for the protection of their community. Relics attracted pilgrims who said their prayers and made gifts and monetary donations to the Church in which they were held. Local people also gave in honour of their saint, to gain protection for themselves and families, and for their town.

Quatrefoil foot with running foliage and set with five roundels of nielloed silver, depicting the Resurrection and the Instruments of the Passion. The knop is embossed with foliage and encircled by a silver band with a nielloed inscription. The main body of the reliquary is cinquefoil in form with five openings. Between each window are buttresses each with a niche containing a small cast figure of a Saint. Below are five rings which originally held bells. The figure of St Homobonus stands at the top of the canopy, which is pierced with tracery.

'S[ancti].Ho[mo]. Boni. Reliqui[a]e.Sutores. Civitatis.Regii.Hic.Locu[m].Dedere'
The shoemakers of the city of Reggio gave the reliquary of St Homobonus to this place.

According to the inscription, this reliquary was made at the expense of the Shoemakers' Guild of Reggio Emilia to contain a relic of St Homobonus of Cremona.

Historical significance: Reliquaries had a complex symbolic meaning. They were believed to be imbued with the holiness of the relic they preserved. The faithful believed that by touching a reliquary, they would receive some of this holy quality.

Reliquaries were central features of the Medieval Church Treasury. They symbolised the status and authority of the Church. Relics attracted pilgrims who made gifts and monetary donations to the Church in which they were held. Local people also gave in honour of their saint and to gain protection for themselves and their town. Thus relics could often give a sense of identity within the church community. Some reliquaries were used in religious precessions or festivals, which both involved the community and also reinforced the status of the Church.

St Homobonus (Italian= Omobono) was a 12th century layman who worked in order to support the poor. He was the son of a prosperous tailor and merchant and gave much of his wealth to the less fortunate. Homobonus was a devout Christian. He died in 1197 while attending mass, prostrated at the altar, his body forming the shape of a cross. Pope Innocent III made him a saint two years later.

St Homobonus is the patron saint of clothworkers and business people as well as the town of Cremona where he lived. The guild of shoemakers in Reggio therefore commissioned this reliquary in honour of their patron saint.

Reliquaries took many forms. Some were shaped to represent the saint or various parts of the body such as an armhead, leg or finger (so-called 'speaking image' reliquaries). Others were designed as a monstrance, which placed the relic on view inside a glass cylinder (monstrare= to show). Another style of reliquary followed an architectural design, often in the Gothic style. This object is an example of such a reliquary.

The mortal remains of saints were known as relics. Believed to effect miracles, cures and good works, they were kept in elaborate containers known as reliquaries. This example was made for the relics of St Omobuono, a 12th-century merchant from Cremona who was renowned for his generosity. It is crowned with a figure of the saint, shown taking coins from his purse.

Museum no. M.514-1956 [2008]
RELIQUARY
Gilt copper, with plaques of nielloed silver
North Italian (Reggio Emilia); about 1500
The saints were believed to effect miracles, cures and good works through their mortal remains. Many churches therefore kept large collections of relics, housed in reliquaries made of durable materials like metal, ivory and crystal. This gilt copper reliquary was made for the relics of St. Omobuono, a merchant from nearby Cremona, who was renowned for his exceptional generosity. A figure of the saint, shown taking coins from his purse, can be seen on top of this reliquary which may have been made to commemorate the guild's charitable work. The niello plaques on the base depict Christ's Resurrection and the instruments of the Passion. [] 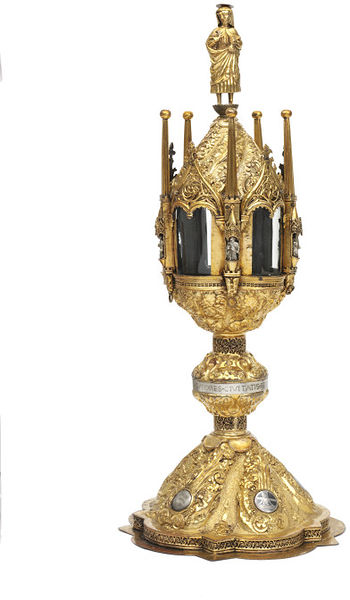