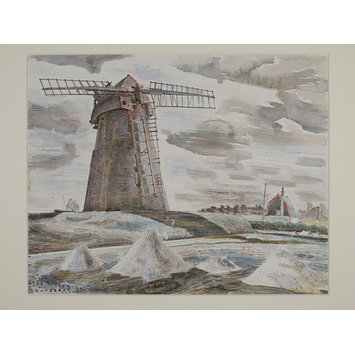 Michael Rothenstein lived in the village of Great Bardfield, Essex, from the late 1930s; the village became something of an artists' colony, with other residents including the Neo-romantic artists Edward Bawden, Eric Ravilious and Kenneth Rowntree. Gibraltar Tower Mill, the oldest (c. 1660), and one of the largest and finest tower mills in Essex, dominates its surroundings. The mill's working life ended in 1930, and in this 1943 watercolour, signs of dilapidation are apparent. However, it was one of the county's relatively few windmills to have escaped total dereliction following the war, being converted into a private house in 1957.

A watercolour showing a large wooden tower windmill dominating a farm; a barn in the middle ground is dwarfed by the windmill. Signed and dated.

This watercolour depicts one of the largest windmills in Essex, Gibraltar Tower Mill, which is one of relatively few mills to have survived to the present day. It was converted into a private house in 1957-58.

Michael Rothenstein lived in the village of Great Bardfield, Essex, in the late 1930s and through the beginning of the war. The village was something of an artists' colony, numbering Edward Bawden, Kenneth Rowntree, and Eric Ravilious among its residents; although these four artists' styles varied greatly, they were all, at the time, painting topographical watercolours.

Gibraltar Tower Mill is probably the oldest (c. 1660) in Essex. It was twice converted into a house, first in the eighteenth century (it then reverted to its original purpose in 1751 and remained a working mill until 1930), then in 1957-58. It remains a privately-owned house today. 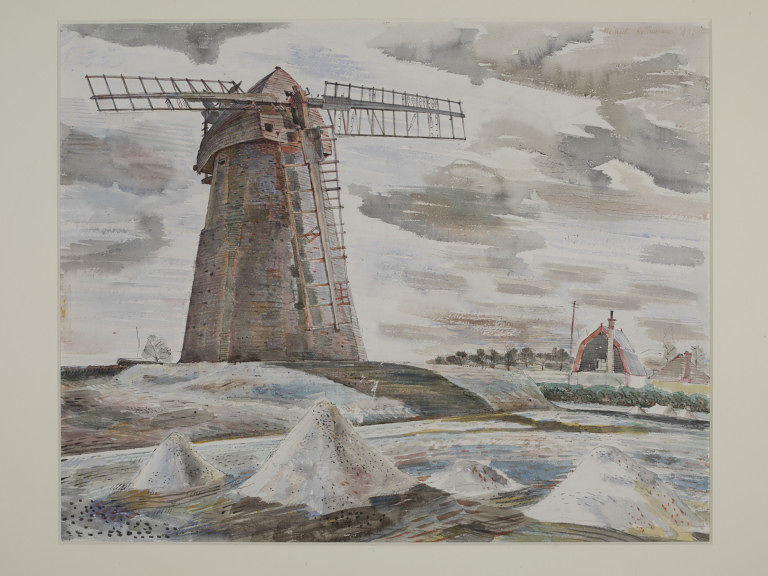