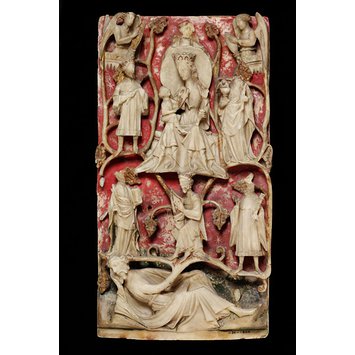 This alabaster panel represents the popular medieval subject of the Tree of Jesse. The reclining figure at the foot of the panel is Jesse, the father of David, with a vine/tree winding upwards out of his chest and up through the panel, representing his lineage. Descendants sit within the vine, including at the top the Virgin and Child.

In the New Testament Christ's direct genealogical link to David, and hence to Jesse, was emphasised. The subject of the Tree of Jesse was widespread in the Middle Ages, featuring in stained glass, wood and stone sculpture, as well as in alabaster. Jesse's descendants can include figures of kings, prophets and even Sybils.

Other representations of this subject in alabaster do survive, although they are not very common. They usually show a broadly similar composition to the V&A panel, including a reclining figure of Jesse, with the same figures of King David and the Virgin Mary above. In this example, the iconography of the Virgin and Child is unusual in that the bird held by the Virgin has grasped the Child's finger in its beak.

The reclining bearded figure of Jesse lies across the bottom of the panel, leaning on his right elbow with his head resting on his right hand, and his left hand touching his raised left knee. He wears a long gown, and out of his chest grows a vine which winds upwards up the panel, embracing two main rows of figures. On the lower level, from left to right, are (1) a standing figure wearing a robe and cloak and carrying a book in his left hand and a sceptre in his right, (2) the seated figure of David, bearded and wearing a crown, facing to his right and playing a harp, and (3) a standing king, wearing a short robe, tippet and lappets, holding a sceptre. On the upper level, from left to right, are (4) a standing crowned king, dressed similarly to (3) above, and (5) the seated Virgin and Child. She is crowned, with the Dove of the Holy Spirit on her breast, wearing a gown and cloak, and looks down to the Child, sitting cross-legged on her knee. He looks up at the bird which he is feeding with his left hand, and holds an orb in his right. Finally, to the right of the Virgin and Child group, is (6) St John the Evangelist, standing, wearing a gown and cloak, and carrying his emblems of a palm in his right hand, and a chalice with a demon rising out in his left. The Virgin is flanked to the upper left and right by angels in little pulpits playing harps.
There are numerous areas of damage, and losses. The angel in the top right hand corner of the panel is a later alabaster replacement. Some coloured wax restorations of the vine leaves and tendrils remain (17.1.06). Major losses include the heads of figures (1), (3) and (6).
The background is green with the usual daisy decoration in the lower part, with the upper part having a red ground, dotted with white stars. There is little paint on the figures, but some gilding.
The back of the panel is completely hidden by a backing of wax, and then a wooden panel.

Carved alabaster, with traces of paint and gilt

Brought under the bequest of F. R. Bryan from S. W. Wolsey in 1954. Previous history is unknown.

The Tree of Jesse was a popular subject in medieval art, as a visual representation of Jesus' genealogy dating back to Jesse, the father of David. It features in stained glass, stone sculpture (eg Christchurch Priory, Hampshire) as well as in alabaster. The tradition of Christ's descent from David is based on biblical references from the Old Testament and the Gospels. The Fathers of the Church and Latin hymns both also refer to the tree of Jesse with reference to Mary (virga ex radice = branch or offshoot of the root of Jesse). Based on these literary sources, the visual renderings of the Jesse tree all show Jesse in a reclined position, with a tree or vine growing out of his body on whose branches ancestors can be observed. These ancestors can be kings, prophets, even Sybils. The Virgin is almost always included.

Representations of this subject in alabaster are not very common, but other examples do survive. The compositions can vary, but they usually show the same three central figures (from the top): the Virgin and Child, King David, and Jesse. The figure of Jesse himself seems generally to be shown in similar pose to this example, reclining across the bottom of the panel, with his head to the left, and leaning on his left hand.
In this example the iconography of the Virgin and Child is relatively unusual, as the bird held by the Virgin has grasped the Child's finger in its beak. 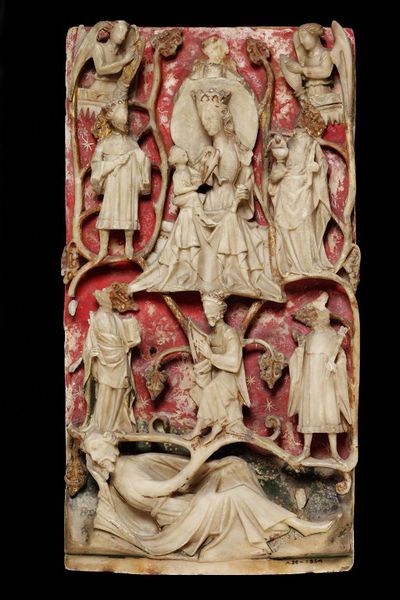